Nate Cooper, a Flemington native, has been working as a clown with Cirque de Soleil since 2007. Photo courtesy of Matt Beard

In high school, Nate Cooper was always the class clown. While he loved to make people laugh, he never realized that one day he’d actually become a professional clown.

These days, the Flemington native is getting smiles and giggles as an entertainer doing physical comedy with Cirque du Soleil, which is premiering the company’s first-ever acrobatics on ice show, called CRYSTAL, coming to the Prudential Center in Newark from June 16-19.

It will be Cirque’s first touring show to visit the New York/New Jersey area since the pandemic started.

Cooper, who is 45 and is now mainly based in Las Vegas, has been working as a clown with Cirque de Soleil since 2007. He performed with the company’s show Love in Las Vegas for many years, before doing Mystére and then Paramour with Cirque on Broadway.

When he realized he wanted to become a performer, he started out as a tap dancer, and would commute into New York City from Easton, Pennsylvania, where his family later moved to, to take classes. From there, he became a roller skater, slapstick tap dancer, and clown. 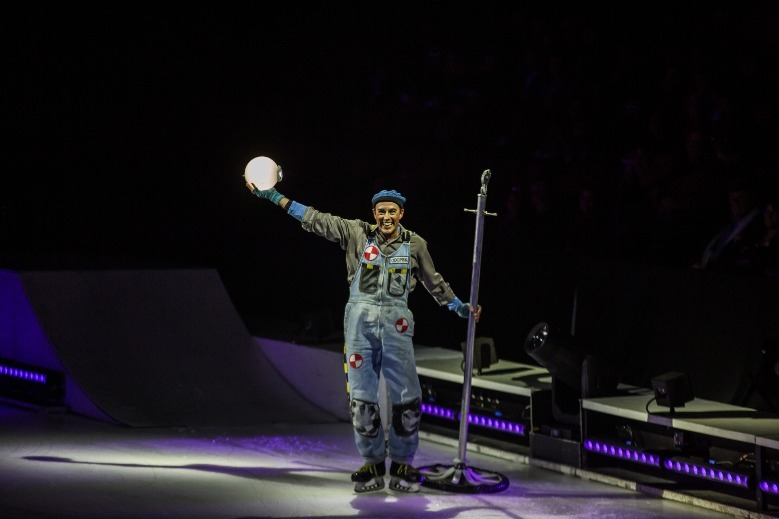 He believes that after more than two years of living through a pandemic, this is the perfect time to bring laughter and joy into people’s lives.

“Laughter is medicine, and we need all that we can get these days. I’ve enjoyed being a clown because it makes us realize that making mistakes is OK and so is laughing at our mistakes. I try to take that approach,” he says. “For youth today it’s important to realize that it’s a difficult time and nothing ends up the way we expect it to. We can adapt and if we can find comedy in our mistakes.”

While Cooper realizes that some people do have a fear of clowns—and there’s actually a name for it, coulrophobia—he likes to think of himself as more of a physical comedian, in the vein of Charlie Chaplin or Buster Keaton. He falls down a lot and gets back up, and it’s funny.

“I don’t wear a red nose or a big colorful wig. I think that helps kids not be afraid of clowns,” he says.

For CRYSTAL, Cooper had to learn how to ice skate, which wasn’t too difficult for him, since he already roller skates pretty well. In addition to skating, you’ll see him juggling, stilt walking and dancing during the show.

CRYSTAL, which is performed on ice, is the story of a girl who doesn’t seem to fit in and ends up having crashing through the ice and finding a bizarre circus world, where she finds her voice. It features around 20 ice skaters and 18 acrobats, who do everything from the trapeze to hand-to-hand acrobatics, synchronized skating, and extreme skating. There are also gymnasts performing on ice with crampons.

“We’re very excited to be back,” says Cooper. “It’s a great family show.”

The show is appropriate for children of all ages. Tickets can be purchased at cirquedusoleil.com/crystal.