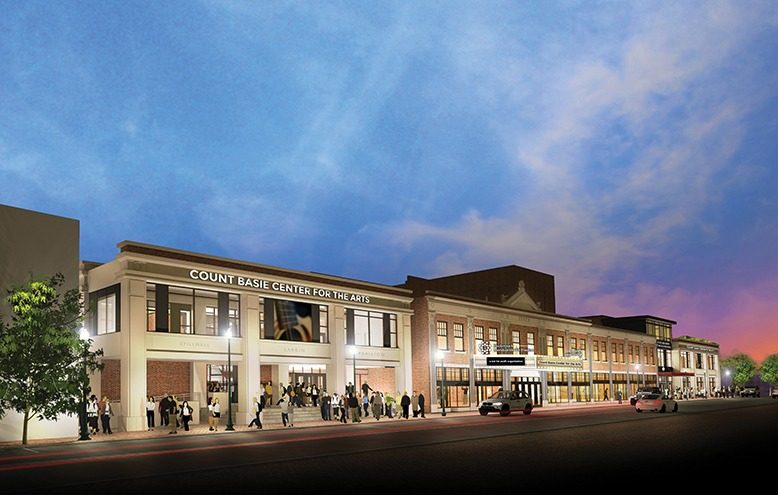 A rendering reveals the Basie’s $28 million block-long expansion project, including a second venue to the west of the historic theater. Courtesy of Count Basie Center for the Arts

Just two days after Hurricane Sandy ravaged the Jersey Shore in October 2012, Adam Philipson started his job as CEO and president of Red Bank’s Count Basie Theatre. Most of the borough had lost power because of the superstorm, but not the historic venue. People flocked to the theater for sanctuary rather than entertainment. They charged their phones, warmed up, and congregated with neighbors. Instead of names of comedians, bands and touring productions, the marquee displayed FEMA information.

“We have a responsibility to this community,” says Philipson. “People depend upon us to really salvage the arts [here].”

Now, in the midst of the coronavirus pandemic, it feels like déjà vu for the nonprofit arts institution, an anchor of Red Bank’s downtown since 1926, when it opened as the Reade’s Carlton Theatre. During the current health crisis, the organization once again has had to pivot and find new ways to serve its audience. Patrons line up in the Reade’s Carlton Theatre lobby circa 1955. Courtesy of Dorn’s Classic Images

“Rather than saying, ‘This year’s going to be postponed,’ we’re leaning into the skid,” says Philipson about the awards presented to Monmouth County high school students. The program became “a virtual celebration of this community and how important the arts are.” Through these digital activities, as well as this month’s live, drive-in fundraising concerts at Monmouth Park Racetrack with Southside Johnny and Jim Gaffigan, the theater has delighted audiences during otherwise trying times.

[RELATED: A Guide to Drive-In Experiences This Summer]

But before Covid-19 swept into the state, the theater was focused on other plans. A $28 million expansion project, which broke ground in September 2017, is expected to be completed this summer.

The vision is to create an “arts campus,” says Philipson. Two new extensions, including a second performance venue, now flank the historic theater on Monmouth Street. Through private donations and grants, the Count Basie Center for the Arts (the name was changed in May 2018) acquired almost all the land on the block between Maple Avenue and Pearl Street, with the exception of Buona Sera restaurant.

“Not many great grassroots organizations [let] you see the immediate impact of your donations on the local and surrounding communities,” says donor Stephen Cutler, who serves as the Basie’s vice chairman of operations and head of the renovation and restoration committee. “The Basie is an exception—and what we have done here will ensure that for years to come.”

Respect for history is in the Basie’s DNA. The center’s namesake, the late jazz great William James “Count” Basie, was born in Red Bank in 1904. The composer, pianist and bandleader went on to achieve worldwide fame and began a tradition of advocating for the arts.

“We have tried our best to carry that legacy forward,” says Philipson. He credits Red Bank resident and comedian Jon Stewart, as well as Basie advisory board members Steven and Maureen Van Zandt, with supporting that mission locally.

Part of building on that legacy is expanding the facility into a regional arts center. The east addition was built to improve the audience experience. The new lobby, triple the size of the old one, boasts a grand staircase, chandelier, and a glass-lined wall overlooking an expanded courtyard for pre-and post-show performances, classes and events. “[Now], we can have a captive audience before the show,” says Philipson.

Other enhancements include new concession stands, larger restrooms, elevators, and updated air conditioning and heating systems. The Stillwell-Larkin Pavilion, named for area philanthropists and twin sisters Carol Stillwell and Mary Ann Larkin, will house a new members’ lounge and serve as the entranceway to the courtyard and lobby.

“We outgrew our space,” says Philipson about the theater, which has sold more tickets than any similar venue in the state for three of the last four years, according to international event-tracking organization Pollstar. Last year, the theater served nearly 222,000 patrons. As part of the recent renovation project, workers disassemble the theater’s 93-year-old pin rail in July 2019 to make way for a hydraulic pulley system. Courtesy of Count Basie Center for the Arts

The only renovations within the historic theater are in the back of the house (an area not accessible to patrons). A two-bay loading dock, hydraulic pulley system and a new backstage hallway are intended to make behind-the-scenes operations more efficient.

To the west of the historic theater, new classrooms and studios in the Grunin Arts and Education Building will provide an upgraded experience for the approximately 1,500 students enrolled in the Basie’s academy of the arts. Notable alumni include pop singer and Rumson native Charlie Puth. The school offers classes in opera, classical music, jazz, dance, improvisation and acting, and partners with the Queens-based Calpulli Mexican Dance Company.

The most anticipated part of the expansion is the new multiuse performance space for everything from concerts to comedy and dance. This second venue—adjoining the education building—will accommodate about 400 seated patrons and 800 standing. The historic theater, which underwent a major interior-restoration project in 2008, seats 1,568 people.

Later this year, acts are expected to take the stage of the second venue. With the addition of this new space, the nonprofit can now host two shows simultaneously.

Philipson is excited for the future. “We’ve added another element for you to also engage the arts in a whole different way,” he says.

The project nearly doubles the size of the complex.

With more space comes more projected revenue. Philipson estimates that the theater has a $17 million economic impact on Red Bank annually. He projects an increase to about $24 million annually with the expansion.

Philipson wants the Count Basie Center for the Arts to become “the spiritual soul of the community,” not just an arts-and-entertainment hub.

“That means that we’re investing in the children,” he says, “and in the health and well-being of the residents and in celebrating each other’s cultures—not just what’s on stage.”