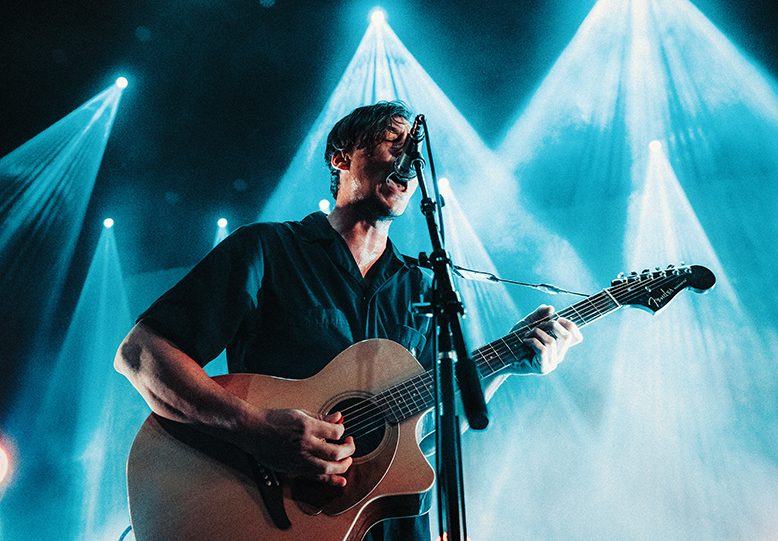 The Front Bottoms’ Brian Sella used to live in Jersey City. Now he and the band are blowing it up with a residency at White Eagle Hall. Photo courtesy of Kris Herrmann/Front Bottoms

The Front Bottoms, now a popular indie rock band, got their start playing in Ramapo College dorm rooms in the late 2000s.

Lead singer Brian Sella recalls a particular performance when he and pal Mat Uychich played an acoustic set for half a dozen students crammed into his girlfriend’s glow-in-the-dark-tape-decorated room.

“It had a good vibe,” Sella, now 33, says about the impromptu performance.“We were kind of always chasing that.”

That tiny production proved pivotal for the childhood best friends. With Sella on vocals and guitar and Uychich on drums, it didn’t take long for the Woodcliff Lake natives to branch out to larger—but still modest—venues like Hoboken’s Maxwell’s and Montclair’s Meatlocker. Living in Jersey City, they built an underground fan base of disaffected youth who were drawn to their impassioned recitals of indie-rock ballads about coming-of-age crises.

A decade later, the Front Bottoms have gone from small crowds to millions of streams, worldwide tours and seven studio albums. This spring, however, the band returns to its roots with three concerts at Jersey City’s White Eagle Hall May 18-20.

“New Jersey is definitely an inspiration because that’s where I grew up,” Sella says. “It’s also where I went to college, which was a big point in my life where I was developing my artistic style.”

Billed as an “intimate hometown performance,” the concert series harkens back to the band’s early days. The 800-person-capacity setting is a mere block away from the former site of the Montgomery Gardens housing complex, which was demolished in 2019; watching the building collapse inspired the hit “montgomery forever” off the band’s latest album, In Sickness & In Flames, which was released in August 2020 but written before the pandemic.

Sella and Uychich have been in Asbury Park since 2015. But Sella calls the band’s Jersey City stint as some of “the best years of our lives.” They fawned over the emo night scene at the local Veterans of Foreign Wars halls and performed regularly at Lucky 7 Tavern, the Lamp Post Bar & Grill and the Historic Jersey City & Harsimus Cemetery. The Front Bottoms, inspired by mid-2000s pop-punk groups like Ridgewood’s Senses Fail, were signed to Hoboken’s Bar/None Records at the time, though they are now with the Fueled by Ramen label.

Soon, the band will release a rerecording of its 2009 LP, My Grandma Vs. Pneumonia, Sella says. Clearly, they are feeling nostalgic, though that’s hardly a surprise for anyone familiar with their lyrics.

“I feel very lucky that we got these Jersey City shows coming up, because it’s kind of like us going back to our old stomping grounds and getting to do it again,” Sella says. “The whole thing is very full circle.”