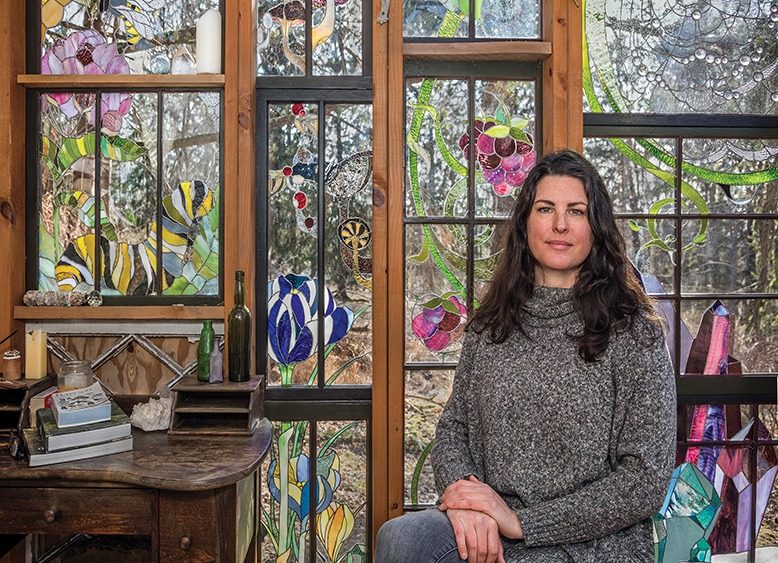 Hidden behind a simple, yellow house in Sparta is a tiny jewel of a building, its walls and roof made of brilliantly colored glass. This stained-glass cabin is the creation of artist Neile Cooper.

“I had been doing stained glass in old window frames to sell at craft shows and galleries. That was the spark of it,” says Cooper, 43. “And I love little cabins and tiny houses and writing sheds—having a little place that’s just your own. I kind of put those two ideas together.” 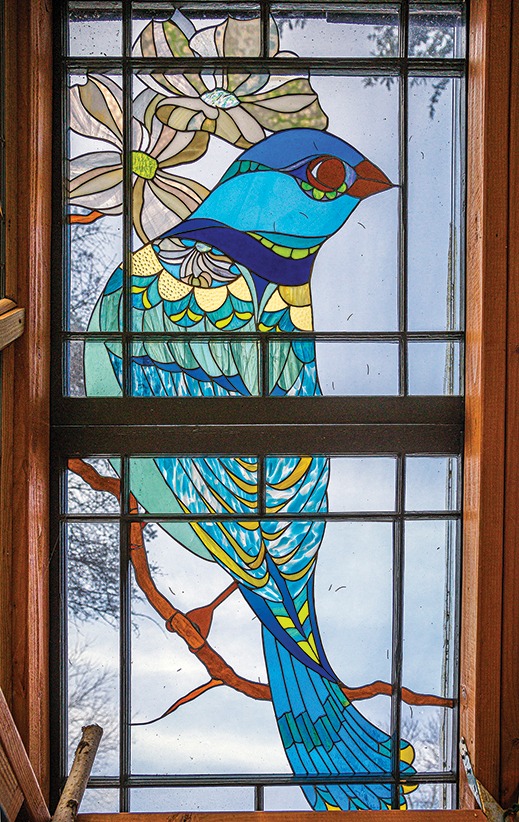 One of Cooper’s glass creations, inspired by nature. Photo by Frank Veronsky

Cooper, who grew up in Andover, fell in love with stained glass while majoring in graphic design at the Fashion Institute of Technology in New York City. These days, she creates custom stained-glass windows for clients, as well as glass butterfly-wing jewelry—made from butterflies that die a natural death after being raised on farms for nature centers.

Cooper started the cabin in 2013. She and her boyfriend, Robert Giaquinta, a tutor and home beer brewer, had moved to Colorado hoping to open a restaurant or brewery. When that didn’t pan out, they returned to their home in Sussex County, near Lake Mohawk.

“I wanted something to be super excited about,” Cooper says. “I put the failed creative energy from Colorado into the cabin.”

Giaquinta’s father, a retired dentist, helped her frame out the 8-by-12-foot building. Her mother searched garage sales and Craigslist for old window frames (the cabin has 40). The building is rich with colors and images from nature: ferns, birds, a spider web, mushrooms, crocuses, monarch butterflies and a hawk with wings spread wide.

Since the cabin has received some Internet love, Cooper has gotten more commissions for the nature-inspired art she creates.

She loves to sit in the cabin, surrounded by trees and the occasional passing deer. Here, she can read or sketch designs for her next creations.

“I feel good,” she says, “that I had this crazy idea that I actually made happen.”

Cooper hopes to hold an open house when possible. For more information on Cooper’s artwork and classes, visit glasscabinstudio.com.