They woke up this morning … for the Super Bowl.

Instead of Tony (the late James Gandolfini) driving from Manhattan into New Jersey, the commercial sees Sigler, who played Meadow Soprano, taking roughly the same path and passing by several sites made iconic in the credits. The show’s theme song, “Woke Up This Morning” by Alabama 3, plays in the background.

Sopranos creator David Chase directed the ad, while Phil Abraham, director of photography for the original title sequence, was also involved in the spot.

“jersey REPRESENT,” Governor Murphy tweeted during the game after Chevrolet shared the ad online, clearly loving the Turnpike and Garden State spots that made it on air. 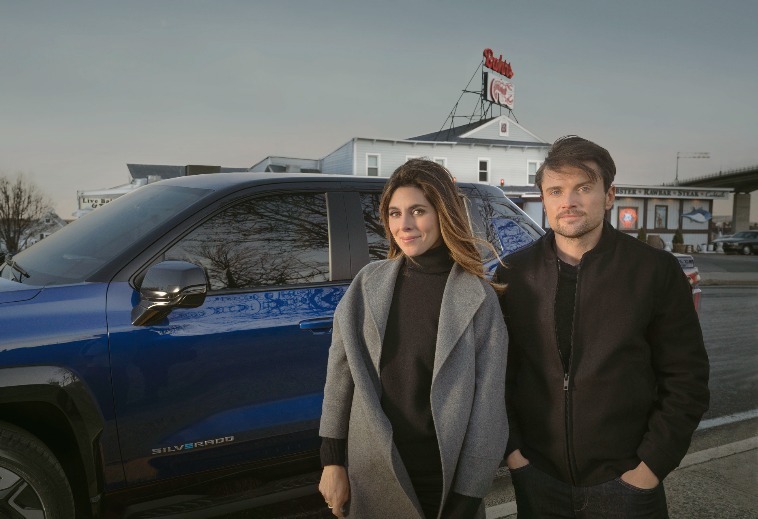 In the show’s original credits, Tony drives a 1999 Chevy Suburban, while in the new ad, Sigler cruises in a 2024 Silverado EV. While Tony lights up a cigar in the original opening, Sigler enjoys a lollipop. Another fun nod to the original series? How smoothly Sigler parallel parks in the ad. In the show’s series finale, Meadow infamously has trouble parking her car before the final scene.

At the end of the show’s opening credits, Tony parks in the driveway of his Caldwell mansion, but in the ad, Sigler’s final destination is the seafood restaurant Bahrs Landing in Highlands—which was seen in the 2021 Sopranos prequel film, The Many Saints of Newark. There, Sigler, 40, meets up with her on-screen brother, Robert Iler (who played AJ Soprano on the show).

The ad ends with Sigler and Iler, 36, hugging and a voiceover saying, “The first-ever all-electric Chevy Silverado. A whole new truck for a whole new generation.” In real life, the actors have remained close friends since the show, which aired from 1999–2007, ended. They even host a Sopranos podcast together called Pajama Pants.

Their co-stars Michael Imperioli and Steve Schirripa also host a popular Sopranos podcast, Talking Sopranos. They recently told New Jersey Monthly about their—and New Jerseyans’—fierce connection to the Garden State–set mob show, which was renewed during the pandemic as many fans watched or re-watched the iconic series.

“We were kind of the home team,” Schirripa, who played Bobby “Bacala” Baccalieri Jr. on the show, told us. “The Sopranos were the Yankees of New Jersey. New Jersey doesn’t have a baseball squad.”

Imperioli, who starred as Christopher Moltisanti, added, “We shot in these working-class, tight-knit neighborhoods. They loved us.”

Schirripa also called B.S. on criticism the show received from Italian-American groups at the time who said the series reinforced negative stereotypes. He also brushed off places in New Jersey that wouldn’t allow the series to film there. “That’s all bulls—t stuff to be honest,” Schirripa said of the backlash. “Listen, we were mostly all Italian-American. We wouldn’t make ourselves look bad.”