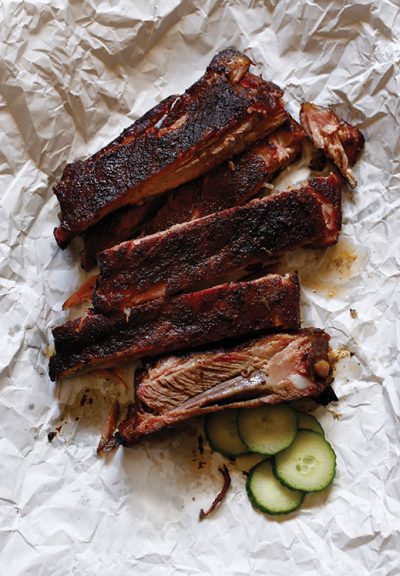 An eater's eye view of the More Than Q's toothsome ribs.
Photo by Jason Varney

Big Ed’s
Old Bridge
Customers will catch a whiff of Big Ed’s as soon as they get out of their cars, thanks to two giant fans over the grill—the restaurant doesn’t use a smoker—that blow into the parking lot. Ed’s claims to be the only Jersey joint to offer all-you-can-eat platters (spare ribs, St. Louis ribs, baby-back ribs, pulled chicken and pulled pork, $19.99), and each week it sells 3,000 pounds of those alone. Other items include jalapeño-and-cheese poppers, chili-cheese stuffed potato, and an entrée of fried clams and shrimp with spare ribs. Family owned and operated by Ed Stoppiello and his wife, Erin, for 23 years, the spot offers a variety of barbecue styles (prepared in Ed’s three-step process and finished with his secret sauce). There’s also a full bar with more than 20 beers on tap. You’ll find a few cut-out caricatures propped outside, like a cowboy and a piglet. Inside, the walls are covered with posters and photos of Ed’s favorite musicians, heavy on Beatles and Elvis.—MR
305 Route 34, 732-583-2626.

Dickey’s Barbeque Pit
East Brunswick
Since Travis D. Dickey, a World War I veteran from Dallas, opened his first barbecue joint in 1941, Dickey’s has become the nation’s largest barbecue chain. It arrived in New Jersey in March, making East Brunswick its 495th location. (The chain moves fast; by press time the count had reached 509.) Dickey’s sons Roland and T.D. Jr., taking over in 1967, expanded across North Texas, then into other states. The founder’s grandson, Roland Dickey Jr., became president and CEO in 2006. Under Dickey’s black-and-yellow signs with red accents, the East Brunswick restaurant sports blue-and-white checked plastic tablecloths and plays country music on the sound system. In each and every Dickey’s, the next day’s brisket and pulled pork ($13.50 a pound) are smoked on site for 14 hours, the same way the founder did, over hickory. Kids eat free on Sundays and there’s free ice cream for everyone, anytime.—LB
77 Tices Lane, 732-479-1950.

The Grub Hut
Manville
Trained chefs Mike and Melanie Johnston felt their community lacked good barbecue and Mexican food, so the couple decided to combine the two. The Grub Hut reflects their travels to barbecue hot spots along the East Coast and to the authentic Mexican restaurants of Southern California. “The two cuisines go hand-in-hand,” says Mike. Diners can customize their dishes, putting brisket in a taco, or adding a spicy Mexican salsa to their ribs. The popular St. Louis-cut pork ribs are dry-rubbed and smoked over applewood; baby-back ribs are dry rubbed and slow roasted on a grill; chorizo is slow-roasted in the oven. A wide range of sauces are offered, from a sweet Bourbon sauce to spicier options. The “Big Time” platter is made for the indecisive: ribs, brisket, chicken, two burritos, tacos, a quesadilla and two sides for $44.95.—MR
307 North Main Street, 908-203-8003.

Memphis Pig Out
Atlantic Highlands
Head smoker Mark Strassburg has been cooking Memphis-style barbecue at this spot for 30 years. He smokes his meats over hickory (the smoke perfuming the entire restaurant). He uses a light spice rub and finishes them with barbecue sauce. His most popular items, he says, are baby-back ribs, spareribs and pulled pork. Customers can’t help but notice the roughly 4,000 pig-related items covering the walls. (Straussburg says he has reduced the number from 7,000.) The restaurant occupies an old building with high, pressed-tin ceilings. The pig art might bring people in once, but as Straussberg puts it, “You don’t stay in business for 30 years if you don’t have something good that people enjoy and keep coming back for.”—MR
67 1st Avenue, 732-291-5533.

More Than Q
Stockton
“A lot of our faithful customers are from Texas,” says Matt Martin, owner of More Than Q, in the Stockton Farm Market. “Anytime we get a new one, they walk right up and say, ‘I’m from Texas!’ And I think, Oh, shit, how’s the brisket looking?”

Martin needn’t worry. Pretty much every More Than Q customer is soon too busy licking lips and tucking into Texas-style brisket, pulled pork and assorted fixin’s to do anything but give a (sauce-splattered) thumbs up to this low-profile but big-flavored Jersey ’cue corral.

“When it comes to meat,” Martin declares, “Texas is the only influence. Brisket, to me, is what you need to do right if you’re going to do barbecue. I still hand select every brisket, because I’m looking for something special. It has to have the right size and the right fat content on top. It also has to be all natural or prime Angus.”

Martin, who hails a long way from Texas (Newtown, Pennsylvania) approaches his smoker as other great brisket whisperers do: with reverence, his senses on alert.

“The meat tells you when it’s done, by feel and by sight,” he says. “I never, ever need to use a thermometer.”

Even so—and despite frequent lines for the brisket and pulled pork—Martin is reluctant to bestow barbecue’s ultimate honorific on himself.

“I’d put our meats against anybody’s,” he declares. “But I’ve known guys who have done this decades and decades, and that’s a humbling thing. I don’t know that I’m qualified to call myself a pitmaster.”

Ironically, Texas is not where Martin got the barbecue bug. In 1994, he was about to start his freshman year at the University of South Carolina when he stopped for a pork fix and some famous South Carolina mustard sauce at Maurice’s Piggy Park, a renowned tabernacle of ’cue in West Columbia, South Carolina.

“It was the first legit barbecue I had ever tasted,” he says, “and it was  a transformative experience. It was an epiphany. I knew I wanted to build a business on barbecue.”

He graduated from the University of Maryland with a bachelor’s degree in communications, worked in sales in Chicago for a decade then went to culinary school at Chicago’s Kendall College, graduating in 2008. South Carolina style might have been the more obvious choice, but Texas is what he inherited.

Martin was working for Whole Foods when his friend Ron Spada opened More Than Q in February 2013. Spada was a Texas-barbecue adherent. Martin joined him and mastered the style before taking over the business last year, when Spada moved to North Carolina after his wife accepted a job there.

“To a degree,” Martin concedes, “I’ve added some regional influences.” Those include Southern cheddar grits with Tasso ham sauce, five-cheese mac-and-cheese, and a South Carolina mustard sauce he recommends dabbing on his pulled pork ($18 a pound), chicken thighs (three for $6) and smoked turkey ($14 a pound). The Texas brisket ($20 a pound) mates well with More Than Q’s Carolina red sauce, a ketchup-vinegar mix. Martin simmers baked beans and burnt ends in that sauce for an unbeatable side.

The Stockton Market, which is indoors, operates Friday through Sunday year-round. Martin’s smoker stands on a trailer parked outdoors, behind his corner booth. Martin bought the business from Spada and changed it very little. “He got us up and running with some pretty solid formulas,” he says. “I haven’t needed to tweak much.”

Martin makes his own rubs. He has one for pork and chicken; one for brisket and “pit beef” (similar to pulled pork); and one for turkey. The pork and chicken rub includes brown sugar. The others are sugarless. All three are “pretty simple,” Martin says, but that’s all he’ll say.