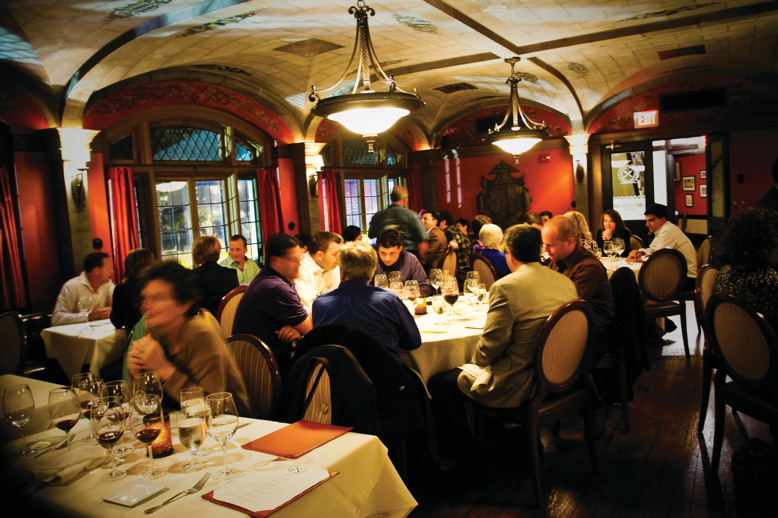 How many restaurants more than a century old remain as good as ever? No statistics are available, but a reasonable guess would be none—except for the Knife & Fork Inn, now more than ever the showpiece of Atlantic City. Isolated from surrounding buildings, this gleaming white edifice remains grand. Once run so traditionally that gentlemen were required to wear jackets, it has been owned since 2005 by the same family that operates Dock’s Oyster House, 15 blocks uptown. The signature dish remains lobster thermidor, an excessively lavish French creation even older than the restaurant itself. Equally over the top are the exquisitely pan-sautéed flounder heaped with crabmeat, asparagus, tomatoes and a mushroom beurre blanc, and a rack of lamb that is an exercise in endless eating, eight chops in all. This is not timid dining. This is Boardwalk Empire indulgence, eating as sensory reward, with sumptuousness on the plate—and everywhere. The second-floor dining room is one of the loveliest spaces in an American restaurant. Modest in size, it is a throwback to a more romantic and pampered age, one still in thrall to European elegance. The crisp service, leaded glass windows and vaulted ceiling cast a spell. If New Jersey had a Sun King, this is where he would dine. 3600 Atlantic Avenue, 609-344-1133. Latour occupies a rarefied place not only in New Jersey fine dining, but in the entire region. Its spacious, 40-seat dining room is connected to the sky and the sunsets over the Kittatinny Ridge through its floor-to-ceiling window. It is even more connected to the ground—through the catacombs three levels down that hold one of the broadest, deepest wine collections in the country, unparalleled in the great growths of Bordeaux, especially the namesake Latour. Sommelier Susanne Lerescu, the intuitive angel of the cellar, will be your guide. The second connection to the ground is through on-site gardens and nearby (or far-flung) farms and waters. Turning superb ingredients into astonishing meals is the mission of executive chef Anthony Bucco, his rising-star chef de cuisine, Martyna Krowicka, and the polished service team. “You’ll eat things you’ve eaten your whole life, but with enhancements that change them,” says Bucco, “and new things that will reward you like old friends. We’re here to make the over-the-top comfortable and the comfortable over-the-top. We never feel we’ve arrived. That will never happen on our watch.” 1 Wild Turkey Way, 973-827-5996 ext 3.

If subtlety is one thing and intensity another, how does chef Shawn Dalziel get them to cohabit so rewardingly? The answer involves balance and attention to detail. Consider the crab cake, that often disappointing appetizer. At Laurel & Sage—which the 46-year-old Californian and his wife, Jennifer, opened in March 2015, naming it for their daughters—Dalziel limits filler, uses plenty of jumbo lump crabmeat, adds finely diced apple for subtle contrast in flavor and texture, then gently folds in colossal (that’s what the size is called) lump crab before gently pan searing (not deep frying) both sides of the cake and serving it with a napa cabbage and Granny apple slaw and a tartar sauce with just enough green peppercorn to court and spark the crab. Scallops with a chestnut purée sauce? Another triumph, and a revealing one. White wine and lemon juice brighten the chestnuts’ earthiness. Still, the creamy, umami-rich chestnut proves a marvelous partner for the subtle scallop. The dish becomes a sonnet of close harmonies. Attention to detail holds sway not just in Dalziel’s recipes, but in attractive plating, friendly service (special requests happily honored) and—way back at the beginning of the meal—meaningful amuses, like an early spring truffled cream of mushroom soup. BYO. 33 Walnut Street, 973-783-1133.

The blissfully luxurious food that has made Lorena’s a high-end destination for 11 years is not about to change, but the destination itself very well might. Chef Humberto Campos Jr. and his wife, Lorena, are “actively, aggressively looking,” Campos says, “to create Lorena’s 3.0.” In 2005, they opened their upscale BYO in a tight storefront at this address that allowed just 32 seats. Campos’s virtuosity melding French and New American drew raves. Two years ago, they managed to expand within the building, freeing up kitchen space and spreading 55 seats comfortably across two dining rooms. That was Lorena’s 2.0. But with customers coming (even weekly, Campos says) from as far away as tony Rumson, Deal and Montvale, as well as Westfield, Cranford, Red Bank and, of course, Maplewood, 55 seats doesn’t cut it. Neither, frankly, does remaining a BYO. “The next phase has to be spectacular,” Campos says. Finding the right space in the right location with a liquor license at the right price is a very long-odds trifecta. That means expanding as a BYO in the existing building is still a possibility. Lorena’s, Campos promises, won’t disappear. Even so, if you’ve never had his octopus with red-pepper marmalade and crispy guanciale; his signature Scottish salmon tartare with crème fraîche, wasabi tobiko and crisp wonton; or his short rib and beef tenderloin duo—well, there’s no time like the present. BYO. 168 Maplewood Avenue, 973-763-4460. The patio overlooking the inlet off the Hudson River is the place to ogle the towers of Lower Manhattan, but wherever you sit, chef/owner Chris Siversen is going to bring your attention back to the plate. Maritime Parc’s name, its location in Liberty State Park within sight of the Statue of Liberty, and the rope cleats and nautical railings in architect Stephanie Goto’s airy design send a clear message: It’s the seafood, stupid. And it is, starting from day one six years ago. But while retaining crowd-pleasers like grilled oysters with leeks and bacon cream, Siversen charts new courses, like this summer’s brightly engaging pan-seared branzino with sunchoke purée and stinging-nettle sauce. Yet landlubbers are never relegated to steerage—not with primordial pleasures like duck-fat fries or the massive pork porterhouse with potato-leek purée and cherry-port demi-glace. With a shipshape cocktail program and John Sauchelli’s fetching desserts, every voyage here begins and ends on a happy note. 84 Audrey Zapp Drive, 201-413-0050.