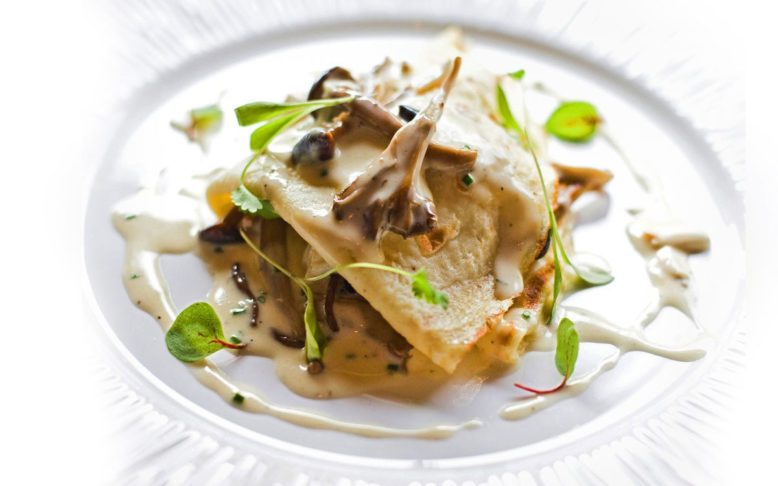 This article was last updated on February 8, 2022. It was originally published in October 2019.

Known for its handsome old homes and canopied streets, Maplewood has a compact downtown, known as the Village—the blocks on either side of the train station that a number of the roughly 23,000 residents take to and from jobs in Manhattan. Most of the notable places to eat are downtown, with a few exceptions on the outlying commercial thoroughfare, Springfield Avenue.

Here are our top picks for the best restaurants in Maplewood, in alphabetical order. If you can snag a spot at Arturo’s, the wood-fired pizza is delicious. Photo by James Worrell

At peak hours, it is not unusual to find a line outside Arturo’s, which takes no reservations. The thing to do is put your name on the wait list, confer with a host about when to check back, and then browse neighboring shops (or grab a seat on the bench if the weather’s decent). The big draw are the pastas, salads, small plates and nicely charred wood-fired pizzas of chef/owner Fred Shandler. Arturo’s serves lunch and dinner seven days a week, so another strategy is to come for lunch or an early dinner. And good luck. BYO. —Eric Levin
180 Maplewood Avenue, 973-378-5800

This fast-casual “Farm to Soul” restaurant with tables, counter service and delivery is one of three locations of a brand founded by two women, Adenah Bayoh and Elzadie Smith, who grew up on Southern cooking, (The other locations are in Pennsylvania.) The small menu offers chicken (fried or baked), fried turkey wings, fried fish (whiting or catfish) and ribs, with a choice of sides. BYO. —EL
1565 Springfield Avenue, 973-313-0328

Since its opening in 2005, chef Humberto Campos’s jewel box of French-inflected fine dining (named for his wife, Lorena) has been a standout not only in Maplewood but in greater Essex County and beyond. Aside from his signature creation—the lump crab and mushroom crêpe in beurre blanc—Campos delivers excellent contemporary takes on favorites such as duck breast, rack of lamb, filet mignon, halibut and molten chocolate cake. BYO. —EL
168 Maplewood Avenue, 973-763-4460

Although it sits just across the border in the Vauxhall section of Union, Mama’s is considered a local staple by Maplewoodians, who smile when they think of it. “I haven’t met no one that came here just once,” says Chris Finnick, pitmaster since 2007 of this takeout establishment (with a couple tables), opened in 1997. The native Jerseyan taps his family’s Carolina roots to infuse sweet-and-sour style into barbecued chicken, pork ribs, beef short ribs and chopped pork sandwiches. His mother, the owner (“I just go by Mama”), says the pork gets a dry rub, is baked for four hours, smoked in a coal-fired pit, chopped, then marinated overnight in her grandfather’s Carolina vinegar sauce. Pork ribs get a similar treatment. The menu includes fried chicken, fried whiting, catfish, shrimp and tilapia as sandwiches or dinners. Add candied yams, collards, string beans or Spanish rice, among other sides. Perhaps the toughest choice is dessert. So many paths to perdition: sweet potato pie, banana pudding, peach cobbler, pineapple-coconut cake and more. Regulars know to call in their orders to shorten waits in the tiny space. “It gets crowded here,” says Finnick. “There’s a lot of kitchen and no front.” BYO. —Mary Ann Castronovo Fusco
2083 Springfield Avenue, Vauxhall, 973-687-0400 Grab a burger, some fries and a Guinness. Courtesy of St. James’s Publick House

How Irish is St. James’s Gate? Look no further than its website’s homepage, which features a second-by-second continuous countdown to the next St. Patrick’s Day. In addition to (equally British) specialties such as bangers & mash and shepherd’s pie, the pub is prized for its excellent burgers. And 20-ounce pints of Guinness draft. Lunch and dinner are served seven days a week. —EL
67 Maplewood Avenue, 973-378-2222