Alementary's Hackensack Lager has a robust foamstand—the term for the length of time the head endures. Photo by Scott Jones

Lager has an image problem. This seems odd, since it is the most consumed style of beer in the world. Yet unlike hoppy IPAs, burly stouts and fruity wheats, lagers aren’t considered sexy or bursting with character. That may have to do with the best-selling beers in America (Bud Light, Coors Light, Budweiser, Miller Lite, Corona, Michelob) being lagers.

But craft brewers know that a lager puts their skills to the ultimate test. It uses a different yeast than ales (one that promotes crisp rather than fruity flavors and aromas), is fermented at colder temperatures, and takes up to twice as long to make because it has to be lagered (from the German word for stored) at cool temperatures to fully develop its character. Lagers traditionally have been more subtly hopped than ales.

“Flaws in ales can be concealed by hops,” says Greg Zaccardi, president of High Point Brewing in Butler, maker of Ramstein beers, including several lagers. “In a lager, there’s nowhere to hide. It’s like you’re singing a capella.”

Lagers are friendly in that they’re relatively low in alcohol. The classic helles (German for bright) is crisp on the palate. Barleys malted to varying levels of darkness add bready notes. A lager like Double Nickel’s Vienna, named best lager by our panel, combines light, medium and dark malts for a creamy, toasty quaff. 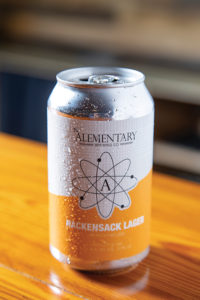 Alementary Brewing in Hackensack, created by a molecular biologist (Michael Roosevelt) and a chemical engineer (Blake Crawford) takes, as you might expect, a scientific approach to every nuance of brewing. Yet ultimately, they are flavor geeks. Their widely praised Hackensack Lager, their best seller, makes a virtue of Hackensack’s hard water, delivering a crisp, spicy foretaste, full, round mouthfeel, and a clean finish with no residual sweetness or bitterness. Its aroma is floral with a faint herbaceousness.

Crawford considers it high praise that “one of our regulars refers to it as ‘beer-flavored beer.’ It’s super food friendly,” he adds. “You don’t have to meditate on it. Many craft breweries want the experience to be all about the beer. There’s a time and place for that.” Indeed, Alementary makes several stunning beers. “But with Hackensack,” he says, “our mission was a beer that supports whatever your experience is today, without it having to be your experience.”