Part of the scene at Rowan University in Glassboro, Angelo’s was built by the Kullman Dining Car Company in the early 1950s. The intimate eatery, with its distinctive exterior awnings and oval neon sign, earns raves for its breakfasts and homestyle dinners.
Photo by Frank Marshal

Sitting in his family’s tavern in Bayonne early in 1912, Jerry O’Mahony had an epiphany. He and his younger brother, Daniel, owned several lunch wagons. Towed by horses to choice locations throughout Hudson County, the lunch wagons were doing good business. But it occurred to O’Mahony that the real money might be in designing and building the wagons, not operating them.

Determined to test the hypothesis, the two brothers and a family friend, a master carpenter named John Hanf, built a lunch wagon in the backyard of the O’Mahony home at 7 East 16th Street in Bayonne.

A Jersey City restaurant entrepreneur, Michael Griffin, purchased the first O’Mahony wagon for $800. A contract, dated July 3, 1912, stated the wagon would operate in West Hoboken (today’s Union City), in the vicinity of Paterson Plank Road and Summit Avenue. Three trolley lines intersected near the proposed location. There would be plenty of foot traffic.

The transaction helped set in motion New Jersey’s golden age of diner manufacturing, which in turn made the Garden State the diner capital of the world.

In the decades that followed Jerry O’Mahony’s flash of inspiration, nearly all the major U.S. diner builders—including Jerry O’Mahony Inc.—set up shop in New Jersey, producing the factory-built, stainless-steel eateries still admired worldwide. The early diners turned out by O’Mahony and others were gems of American industrial design; often, they resembled gleaming railroad cars. They remain prime examples of Streamline Moderne architecture, a concept emphasizing sleek lines and aerodynamic forms.

The diners reflected the American Machine Age, a period between the two world wars that saw an explosion of innovation and technology. The diner, in essence, became the machine that fed travelers, factory workers, truck drivers and middle-class American families. They emphasized fresh, homemade food and friendly service at an affordable price.

The mobile lunch wagon—like those the O’Mahonys owned—actually debuted in 1872 on the streets of Providence, Rhode Island. But the diner business found fertile ground in New Jersey, thanks to the state’s population density and superior infrastructure. Diners became an integral part of New Jersey’s culture, commerce, mythology and roadside landscape. (Today’s popular food trucks also descend from lunch wagons, carrying on the mobile-meal tradition.)

Robert Kullman, the one-time president and chief executive officer of Kullman Dining Car Company, which his grandfather established in Newark in 1927, describes diners as “community restaurants—places where anyone could gather, feel relaxed and enjoy good food at a fair price.” The best diners, he says, became fixtures in their communities. “That’s what gave diners a special place in New Jersey.”

Garden State diner builders churned out hundreds of neon and stainless-steel eateries from the 1930s to the 1950s. On September 23, 1951, the New York Times estimated there were 6,000 diners in the United States, most of them east of the Mississippi River. The diners served 2.4 million customers each day.

Garden State masterpieces of the era that remain standing today include the Summit Diner, built in 1938 by Jerry O’Mahony Inc. of Elizabeth, and Bendix Diner in Hasbrouck Heights, installed by Pequannock-based Master Diners, circa 1947. Vintage diners like these are modular, prefabricated, fully equipped eateries, built in a factory, then transported and assembled on location. This iconic 1938 Jerry O’Mahony model has an old-school interior, wherein patrons sitting at the counter soak up the invigorating sights, sounds and smells of food being prepared on the flattop grill. Further allure: the mountain of crisp bacon always piled there. Photo by Frank Marshal 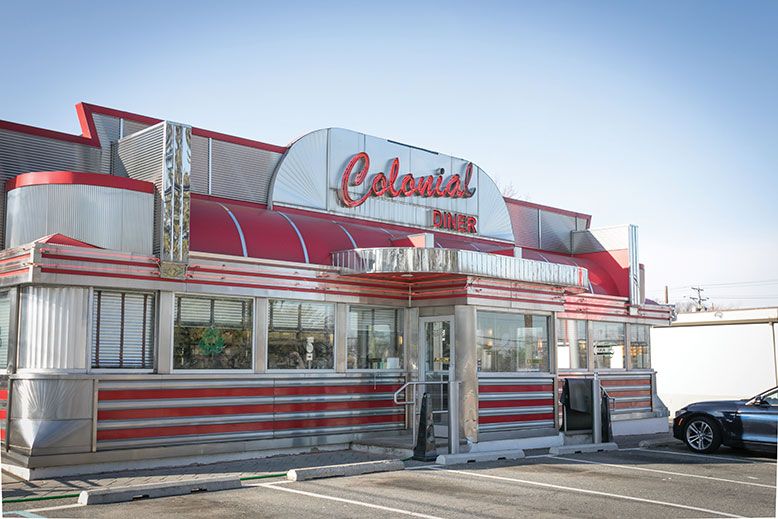 Built in the mid-1950s by Mountain View Diner Company, the Colonial in Lyndhurst retains the look of the period. Keep an eye peeled for this recurring special: shrimp salad on a roll with bacon, avocado, fresh spinach and tomato slices, with a cup of clam chowder on the side. It’s a winner. Photo by Frank Marshal A colorful, late-1940s Silk City number built in Paterson, the Roadside was trucked to its location in Wall. It was used as a location for the photo shoot for Bon Jovi’s 1994 greatest hits album, Cross Road. Photo by Frank Marshal Built by Kullman, this gleaming establishment in Berlin is known for its extensive list of four-egg omelet platters. Photo by Frank Marshal It’s a safe bet that this temple of glass brick (a Kullman design feature) on Route 1 in Edison will be packed for weekend breakfast and lunch. Photo by Frank Marshal Displaying its own Kullman glass-brick tower, the Jersey in Cinnaminson is open ’round-the-clock. The menu includes broiled seafood, salads and all manner of sandwiches, including (with Philly just across the river) cheesesteaks. Photo by Frank Marshal

Alas, tastes change. By the late 1950s, the diner business began to slump. The Northeast market was saturated, and the anticipated Western markets never took off. People in the Midwest preferred drive-ins and fast-food restaurants. Soon, fast-food chains moved eastward and elbowed their way into choice locations, often competing with family-owned diners.

Adjusting to the new reality, diner owners in the 1960s and 1970s opted for bigger structures more akin to restaurants. Kitchens were hidden away, and significantly more seating was added for customers. Such structures had to be built on-site; the factory-built diner was becoming a dinosaur.

Diner aesthetics were changing, too. “In the early 1960s, municipalities didn’t want diners,” says Kullman. Zoning boards, he explains, objected to the stainless-steel, truck-stop image of the classic diners. “They didn’t even want the word diner in the sign.”

As a result, Kullman’s parents, Harold and Betty, created what they called the colonial look, substituting wood-and-brick exteriors for the stainless-steel facades. Interiors got a warmer, family-friendly look, with wood paneling, hanging light fixtures, smaller counters, and larger booths and tables. Words like restaurant and grill replaced diner in the signage.

As tastes continued to change in the 1960s and ’70s, Kullman rolled out the “Mediterranean” design, with white stone exteriors and red tile roofs. More recently, diner design has gone retro, with renewed interest in the classic stainless-steel look.

The Kullman company, which moved from Newark to Lebanon in Hunterdon County, created an estimated 1,500 eateries over eight decades, producing everything from early lunch wagons to the sprawling, stainless-steel Tick Tock Diner in Clifton, factory built (in seven sections) in 1994. Robert Kullman’s sale of the company in February 2006 marked the end of factory-made diners in New Jersey.

Today, the Garden State has about 600 diners, including factory-built eateries, site-built structures and storefront businesses. It’s hard to tell anymore what constitutes a diner.

Richard J.S. Gutman, whose 1979 book American Diner is considered the first history of the industry, warns not to be “rigid” when defining a diner. He weighs architectural significance as well as intangibles: quality of food and service; affordability; camaraderie between customers and staff; the cozy, compact interior atmosphere; and whether the eatery has a meaningful place in the community it serves.

“The diner has always been this place where people get together to share ideas,” says Gutman. “It’s this everyday, overlooked culture that makes the world go ’round. Diners have evolved architecturally, and menus have changed, but they’ve always been places where people like to go. It’s part of a diner’s mystique. It’s something that goes beyond food.”

So is New Jersey still the diner capital of the world? “Absolutely,” declares Gutman. “Without a doubt.”

Michael C. Gabriele is the author of The History of Diners in New Jersey, published in 2013 by Arcadia Publishing/The History Press.