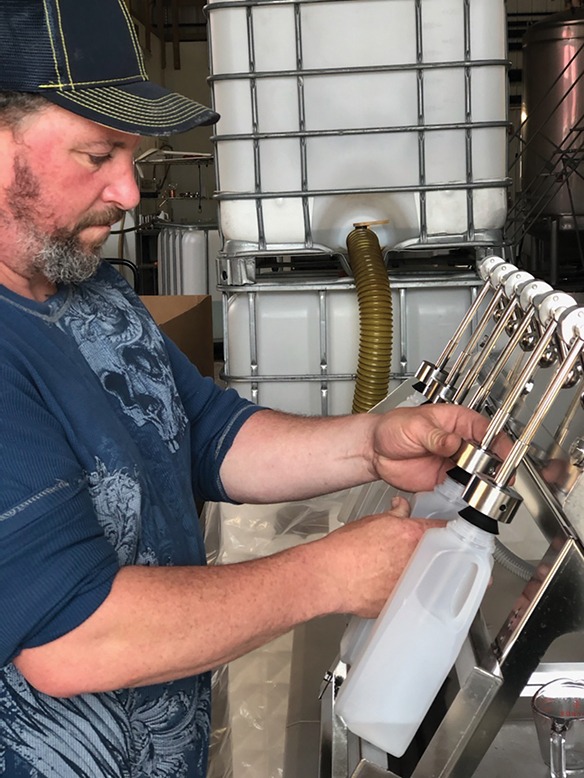 Kevin Bascom, a member of the Nauti Spirits production team in Cape May, fills a bottle with hand sanitizer. Courtesy of Nauti Spirits Distillery

On a typical day, the two stills at Nauti Spirits Distillery in Cape May produce vodka, gin, whiskey and rum. But recent months have been anything but typical, and the stills have been repurposed to combat the coronavirus. Since March, they’ve been working around the clock to create 300 gallons of hand sanitizer a week.

When the outbreak caused a nationwide shortage of sanitizer, distilleries all over the state rushed to help. Nauti was among the first, along with Claremont Distillery in Fairfield, Jersey City’s Corgi Spirits and Asbury Park Distilling.

“We had plans in place before the federal government even authorized it,” says Nauti Spirits co-owner Steve Miller, who teamed with Partners Pharmacy in Springfield Township to make an FDA-approved product. The sanitizer, 80 percent alcohol, includes a touch of vitamin E oil for skin moisturizing and tea-tree oil for a pleasant scent.

Nauti donated the start-up batch to first responders, assisted-living centers and nursing facilities. When that initial need was met, they opened sales to the public at the distillery, charging 50 cents an ounce, just enough to cover costs. Customers can use their own containers or buy one from the distillery.

“We’re not selling it for a high price; we refuse to do that,” Miller says.

[RELATED: How to Support New Jersey Wineries During Coronavirus Shutdown]

After Governor Phil Murphy shut down nonessential businesses, Miller was forced to lay off 11 of his 15 employees. Making sanitizer in significant quantities, he says, “has been a real challenge for a very reduced crew.” In early May, when this story went to press, Miller was planning a “return to normal” involving rehiring staff with a loan from the federal Paycheck Protection Program (PPP). Under the terms of the program, the loan is forgiven if at least 75 percent of it is applied to payroll.

Miller also needed to replenish his stock. “We blew through pretty much everything we had distilled previously that we were going to use for vodka or gin, most of which was made from the corn we grew on our farm,” he says. Buying corn from other local farms, Nauti started making whiskey and gin between batches of sanitizer. Flipping between the two products has required a “massive amount” of cleaning to keep the stills in top shape for spirits production.

During the shutdown, breweries and wineries have also been restricted. Murphy’s order banned all tasting-room visits and on-site events. Home delivery was allowed only for wineries. But on March 30, Murphy temporarily lifted the delivery ban for breweries. (Distillers were still limited to curbside sales.) Being able to deliver cases directly to doorsteps has helped some breweries stay afloat amid the mass closings of bars and restaurants.

“The biggest struggle for us is losing sales in our BYO outlets,” says John Cifelli, general manager of Unionville Vineyards in Ringoes, referring to the 2012 law that allows wineries to sell their products in up to 15 off-site locations. “Fourteen of those 15 are in restaurants, and they are doing very little business.”

The good news for the industry, if not necessarily for public health, is that alcohol consumption is up. National sales of alcoholic beverages rose 55 percent in one week at the beginning of the pandemic, according to market research firm Nielsen. With liquor and wine stores deemed essential businesses in New Jersey, retailers have been winners—especially those equipped to ship directly to consumers.

Now there’s a new shortage: shipping supplies, especially boxes. “I got a phone call from a desperate liquor store offering me two times the cost if I had any to spare,” says Cifelli, who was out of boxes himself. If you can drive to your local brewery, winery or distillery to pick up your order, you’ll be doing them a favor.