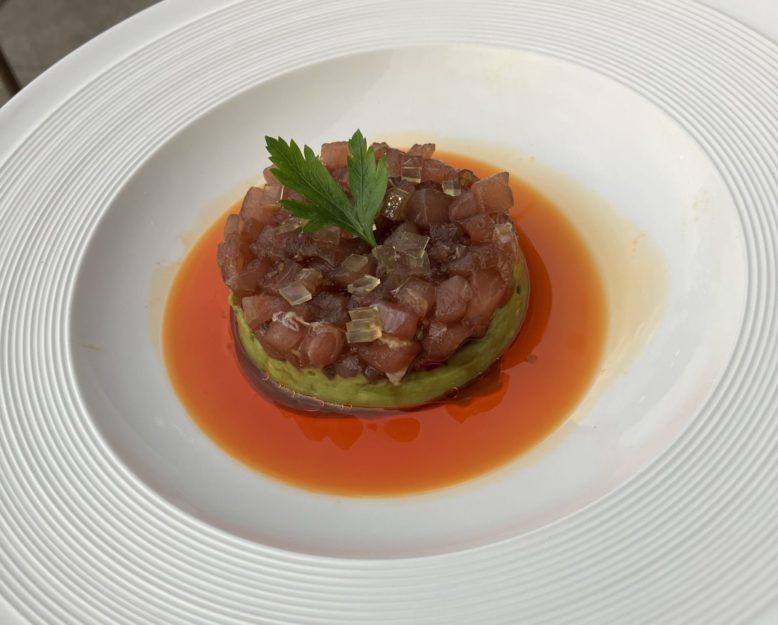 Tuna tartare on avocado and chili oil, one of the dishes served at Ficus. Photo courtesy of Jill P. Capuzzo

When Quinta Li was 14, her family moved from southern China to Princeton in search of a better education for her and her sister. The town’s lauded public school system prepared them well for college and grad school before Li spent four years studying fine art at the University of the Arts in London. She then earned a master’s degree in art and art education from Teacher’s College at Columbia University.

After completing her education, Li returned to Princeton and opened a restaurant, Ficus Café, in 2021. Located on the main drag, Nassau Street, it faces the Princeton University campus.

“I am an artist, I studied art, and I love teaching,” says Li, now 26. “But food is my passion, and it’s always been my dream to start a restaurant. I decided to pursue my dream before pursuing my career.” Burrata on crostini with olive tapenade at Ficus Above. Photo courtesy of Jill P. Capuzzo

Ficus Café, on the street level, caters to a steady stream of students seven days a week with “lifestyle” bowls and salads, sandwiches, teas and smoothies.

On the second story, Ficus Above, a full-service restaurant, has been a bit slower to take off. Though it opened last October, Li says she has not held a grand opening yet. “We want to be completely ready,” she says. With seating for about 60 inside, and 40 outside on a pleasant patio, Ficus seems poised to take off. Li is hoping the restaurant’s New American menu and displays of local artists’ works will attract patrons as the school year picks up.

The seasonal menu features a number of interesting dishes created by executive chef Roman Lev and head chef Samuel Lim, both veterans of David Burke establishments as well as various Michelin-starred restaurants. The timbale of tuna tartare on avocado purée we started with was fresh and gingery, but be ready for the pool of spicy chili oil it rests in. Creamy burrata over olive tapenade on crusty crostini was finished with a tangy orange marmalade.

The most unlikely combination of flavors—honey miso–glazed salmon with Cajun seasoning—turned out to be appealingly lively and balanced, with a crusty coating. To end the meal, a poached pear with vanilla ice cream made a nice palate cleanser.

Business has picked up with the addition of live jazz on Saturday nights. Li hopes to capture the public’s fancy with art shows on the walls of the café and the restaurant, too. Tapping into her art background, Li has invited some of the area’s most gifted professional artists to display their work on the hunter-green walls of Ficus Above. A summer show, “Momentum,” featured abstract paintings by Larry Mitnick and large oil paintings of vintage cars by Richard Harrington, two Pennsylvania artists. A new show, “Salon d’Automne,” opened in September and includes landscapes, scenes from nature, and portrait paintings by Jersey artists Heather Barros, Beatrice Bork, Bill Jersey and Laura Rutherford Renner.

Downstairs, the café’s walls are covered in artwork by students, from middle school to the college level. For Li, combining art and food was a primary objective when she took over the space previously occupied by Despana restaurant, which closed in 2020 at the beginning of the pandemic.

“I wanted to support local artists in the space upstairs, but students also need a place to show off their work,” Li says. “It’s important for them to have a safe space where they can bring their friends and be proud of what they’re doing.”

As for mastering the running of a restaurant, it’s a work in progress for Li, who creates installation art and writes poetry in her spare time.

“I’ve never worked in any restaurants, never mind owned one,” she admits. “I’ve had to learn everything from the ground up. It’s been hard, but I’m enjoying it.”