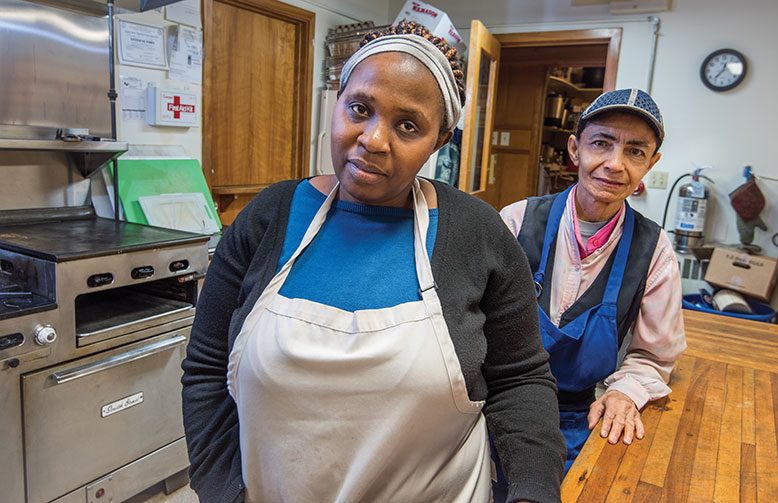 Marion Munk and Albert Valeri say they are atheists, but they enjoy eating lunch once or twice a week at the Reformed Church of Highland Park, across the Raritan River from New Brunswick. The food is often unfamiliar, like today’s Middle Eastern fattoush bread salad ($5), “but it’s always good,” says Valeri. Yet that isn’t the main reason they and many others come to what Pastor Seth Kaper-Dale calls the Global Grace Café.

People come to show support for the refugees and immigrants who cook the food. The woman who made the fattoush, for example, is a Syrian mother of three, Najla (her first name). Her sons, 18 and 20, have been stranded in the Middle East, unsure if they will be allowed to join her in the wake of President Donald Trump’s immigration ban.

Kaper-Dale opened the café last April. “We have 44 countries represented in our church,” he says, “and I started thinking, We have the best potlucks of any church in the country, maybe even the world. When you share the table here, you eat food from Korea, Indonesia, Sierra Leone.”

Kaper-Dale, 41, has run the church for 15 years. “By mid-2015, I had become deeply concerned about the refugee crisis,” he says, “and I wondered if we could connect the skills of some of the refugees arriving with something we’re good at, which is bringing out the flavors of the world.”

Some refugees—like Mukayisenga, who escaped to Uganda after war killed much of her family and is still unsure whether a son who was unable to escape with her is alive—were already coming to Highland Park through a government-approved refugee agency in Elizabeth. Late last year, Interfaith-RISE, a group Kaper-Dale and other interfaith partners founded in 2015, won government approval for its own program.

“We’re approved to receive 50 refugees and 10 asylum seekers by October 2017,” he says. The church helps the newcomers find housing through the Reformed Church of Highland Park Affordable Housing Corporation Kaper-Dale founded 11 years ago.

So far, two Syrian families have arrived from a refugee camp in Amman, Jordan, via Interfaith-RISE. They’re not on the café staff yet, but they may be soon. Business has nearly doubled since Trump became president. The café now brings in around $1,800 a week in sales, enough to turn a profit and maybe pay more refugee cooks, Kaper-Dale says. That is, if more refugees are allowed in.

At Global Grace, diners grab a tray and are served from chafing dishes, cafeteria-style. Randall-Goodwin says she has learned a lot just by listening to the cooks. “There are so many ways to prepare rice around the world,” she marvels. “We are all learning from each other’s cultures.”
Mukayisenga, torn from loved ones and homeland, has much on her mind. “When I think about things that have happened, I feel bad,” she says. “But in the café, I feel good. This is a nice family to have.”