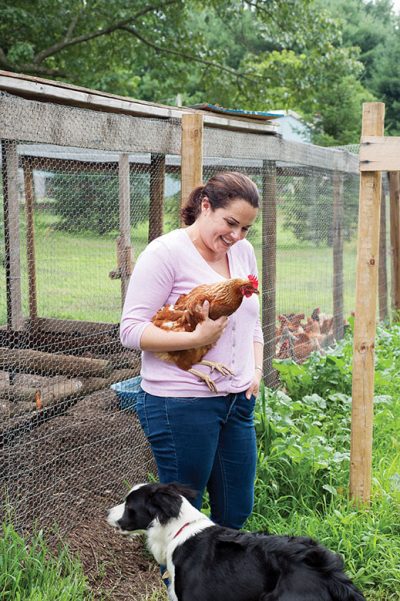 While attending Rider University in Lawrenceville on a full acting scholarship, Jennifer Makris thought competing in beauty pageants might jump-start her acting career. In 1993, she won her first local pageant (Miss Essex County) and was named Miss New Jersey the following May. That sent her to Atlantic City and the 1994 Miss America Pageant. The 21-year-old finished second runner-up “and was thrilled. Go Jersey!”

Indeed, “the pageant did the trick,” she recalls. “I had some recurring roles on soaps through the years and some modeling.” Along the way, she married (becoming Jennifer Hill), had four children, hosted a TLC talk show called Surviving Motherhood and then endured a divorce.

What Hill, now 43, never expected is that beauty pageants would prepare her for entrepreneurship. But in 2014, she launched what quickly became Local Abundance. Founded to sell sustainably sourced, antibiotic-free meat, seafood and poultry to consumers, it now sells to chefs as well. Most days, Hill dons casual duds to scurry around her warehouse in suburban Allentown, a few miles east of Trenton.

“Believe it or not,” she says, “I owe a lot to my pageant days. I learned to always have grace under pressure. I learned how to push through exhaustion and fear of failure in front of everyone. All with a smile—and in heels! Most importantly, I gained confidence, independence and a talent for expressing my opinions on issues that matter to me. All this has really served me well in life and in business.”

Hill’s resilience was put to the test in 2007. Pregnant with her fourth child, she was hosting Surviving Motherhood, which she describes as “women sharing struggles and joys and offering each other advice.” The pregnancy proved high-risk, saddling her with medical bills. Surviving Motherhood was canceled after one season, and she and her husband divorced. She filed for bankruptcy—and survived that, too.

Hill found a sales job at River and Glen, a wholesale supplier of sustainable seafood and meat in Bensalem, Pennsylvania. Though never a foodie, she learned fast. “It’s hard to go back to Perdue after you’ve had pasture-raised organic chicken,” she says. Her palate awakened, her ambition grew. She asked herself, “Why just sell to chefs? Why don’t we sell to people? I would see all this overpriced, mislabeled garbage at the butcher and fish counters, and I knew I could offer people better.”

With the blessing of River and Glen founder James Macknight, in 2014 Hill posted a query on Allentown’s Facebook page asking if anyone was interested in buying River and Glen seafood through her. Within minutes, dozens of yeses poured in.

At first, customers picked up orders at her home. “I knew I was onto something when I was rushing home one day and there was this line of cars on my street,” she recalls. “I realized it was people waiting to get into my driveway to get their stuff.” Hill’s parents were Local Abundance’s first investors.

Macknight closed River and Glen in 2015. This year, he and Hill partnered to create Castle Island Smokehouse, which makes and markets high-end products such as smoked Norwegian salmon. Local Abundance’s sales of Castle Island product to restaurants such as Le Bernardin in Manhattan, the Stockton Inn, Huntley Taverne in Summit, and Avenue in Long Branch help cover its overhead. It now has its own warehouse.

Hill is consulting with a chef on a line of prepared foods. As for her kids, now ages 8 through 17, “they eat pizza and grilled cheese sometimes, and I’m fine with it. They’re going to grow up knowing about the food they eat, whether it’s crap or real. That’s what’s important, knowing the difference.”