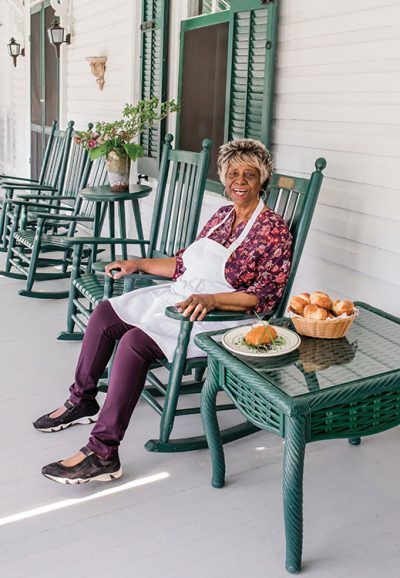 Cook Lucille Thompson, 89, takes a breather on the porch of the Chalfonte, where she has worked summers since girlhood. Beside her are her famous dinner rolls and crab cake.
Photo by Jessica Orlowicz

During her shift, Lucille Thompson, a cook at the Chalfonte Hotel in Cape May, is literally sitting down on the job, watching her favorite soap opera, General Hospital, on TV. But Thompson, 89, is no ordinary employee. Young staffers stop by the kitchen, asking, “Miss Lucille, can I get you anything?”

She often agrees to coffee or water. But what Thompson likes best is the work and the people. The sitting is a concession to age; the TV, which Thompson brought from her house years ago, a privilege recognizing her family’s lifetimes of service to the Chalfonte.

Her day begins at 6 am, baking buttermilk biscuits and cornmeal spoon bread and frying fish for breakfast. Later come crab cakes and her coveted dinner rolls, her signature item. She wraps up at 6 pm, but before heading to her house in West Cape May, she chats for an hour or two with kitchen mates. “I like company,” she says, “and the girls and guys are so nice.”

This is Thompson’s 82nd summer working at the Chalfonte. Her grandmother, Clementine Young, began working there in 1911, the year her employers, the Satterfields of Richmond, Virginia, bought the hotel, built in 1876.

The Satterfields endowed the Chalfonte with a Southern graciousness that has become less formal and more inclusive over the years. Young worked summers for the family as head chambermaid at the hotel, and in a similar capacity at their Richmond home in the off-season.

Young’s daughter, Helen Dickerson, and eventually Dickerson’s daughters, Dot and Lucille, also shuttled back and forth with the Satterfields. At the Chalfonte, Dickerson ascended from head waitress to become the first queen of the kitchen. Her fried chicken, collards, lemon meringue pie and other dishes elevated the Magnolia Room’s Southern accent to iconic levels. Dickerson appeared on the TV shows of Phil Donahue, Sally Jesse Raphael and Regis Philbin.

Thompson was born in Richmond in 1929.“When I first came to Cape May,” she recalls, “I was seven and Dot was nine. Our job was to rinse the sand out of the guests’ bathing suits, hang them to dry, and next day deliver them to the rooms.”

She has vivid memories of segregated Richmond after World War II. As teens browsing in a department store, she and her girlfriends were caught sneaking a drink from the “white” rather than the “colored” water fountain. Some authority figure confronted them. “He said, ‘Can’t you read?’ We said, ‘Yeah, we just wanted to see what it tasted like.’ He asked us to leave, and we left.”

At the Chalfonte, the Satterfields employed blacks, but, says Thompson, did not permit them as guests. “That,” she adds, “ended with Anne LeDuc. She was open to everybody.” LeDuc and Judy Bartella bought the hotel from the Satterfields in 1982. Asked about the exclusions, the Chalfonte responded in an e-mail, “Black guests were permitted in the hotel and dining room in the late 1970s. Anne LeDuc worked at the hotel prior to purchasing the property and helped to enact the policy.”

In the ’70s, Lucille (by then Thompson) and Dot (Burton) were promoted from waiting tables to the kitchen. Of the Mullocks, who bought the hotel from LeDuc and Bartella in 2008, Thompson says, “The whole family are nice. Dillon [the GM] is my hero. When the AC in my house went out, he brought in a big fan, then he had the AC fixed.”

Mastering their mother’s recipes and developing their own brought Burton and Thompson attention in the ’80s from newspapers and even Tyler Florence on the Food Network. The fame of Thompson’s dinner rolls (one per guest, $1 for a second) arose from the relentless pace of the kitchen and the improvisational save it triggered.

Before creating the batter, she explains, “you have to put the milk on the stove with butter and Crisco, then cool it down. But one day I was in such a hurry and late getting started, so I put vanilla ice cream in to cool down the milk. It gave a little sweeter taste to the rolls, but they still brown up nicely.”

Retirement is an issue Thompson wrestles with, as did her mother. In a 1989 interview for the Chalfonte Newsletter, Dickerson said, “I’ll be 80, and I’ve been retiring ever since I was 60, but they ain’t gonna get rid of me because I am going to sit right here with my boots on.” She died the next year. After that, the hotel began hiring executive chefs. Burton cooked until her death at 87 in 2015.

That loss “took a long time to get over,” Thompson admits, “because when Dot’s husband [Frezel] passed, Dot came to live with me. Every now and then it hits me.” In Dickerson’s day, the kitchen brimmed with family. At various times the crew included Dickerson’s daughters; Frezel; Thompson’s son, Charles; Burton’s son, Jimmy; and Burton’s daughters, Lynette Burton and Tina Bowser.

These days, Thompson takes comfort in the presence of Bowser, who works mornings making bacon and eggs for the breakfast buffet and helping Thompson fry fish. “I’ve been passing on to her,” Thompson says.

When the hotel closes for winter, Thompson spends much of the off-season with Charles, 51, who lives in Edison, and his children. “Every year I say, ‘This is it,’” she muses. “It’s not so bad to work for six months and sit down for six months, but doing nothing for 12 months? If my health is good, well, who knows? We’ll see what next year brings.”