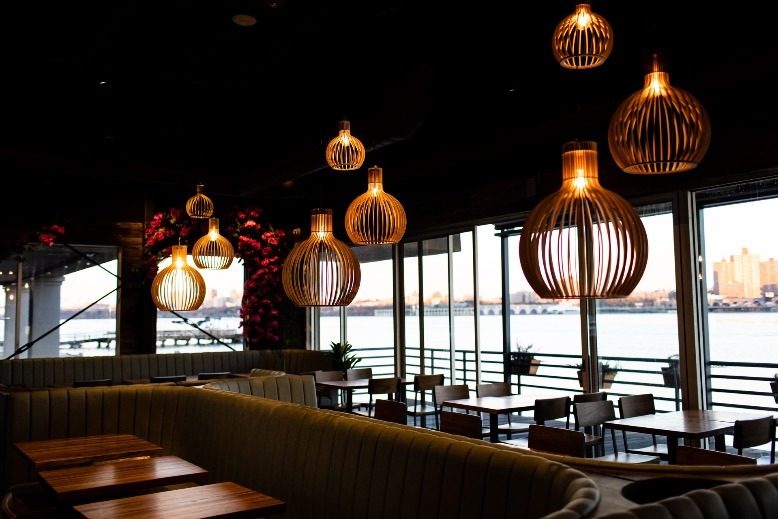 Taverna Veranda is slated to open in Edgewater this December. Courtesy of Rou Dimitriou

A new Mediterranean eatery is opening on the Hudson River in December. The restaurant will be housed in a former bank; the menu is spearheaded by executive chef Nestor Moina, who will offer plates such as lamb burgers, falafel-crusted salmon, lobster gyros, spinach pie rolls and more. Taverna will be open daily, beginning December 1, from 5–11:30 pm, with lunch and brunch following shortly thereafter.
725 River Rd., Edgewater; 201-945-5430

Patsy’s Seafood & Pizza House will change its name to Mama Dag’s in December. Both the original name and the new one honor owner Anthony Dagostino’s mother, Patricia. Dagostino also announced the restaurant is ready to expand and will add additional cuisines and concepts to its menu.
410 St. Cloud Ave., West Orange; 862-233-7557

The pasta shop announced its closure in September—but an outpouring of local support (including more than $12,000 from a GoFundMe campaign) has enabled Chef AJ Sankofa to plan a reopening before the end of the year.
92A Elm St., Morristown; 201-520-1546

This popular chicken-finger chain is remodeling its Union location to add its first drive-through service window. Located on busy Route 22, the franchise hopes to offer faster service. The menu includes grilled and crispy chicken tenders, with sauces such as waffle (sweet maple frosting), buffalo balsamic maple and more.
2180 US-22, Union; 908-557-9250