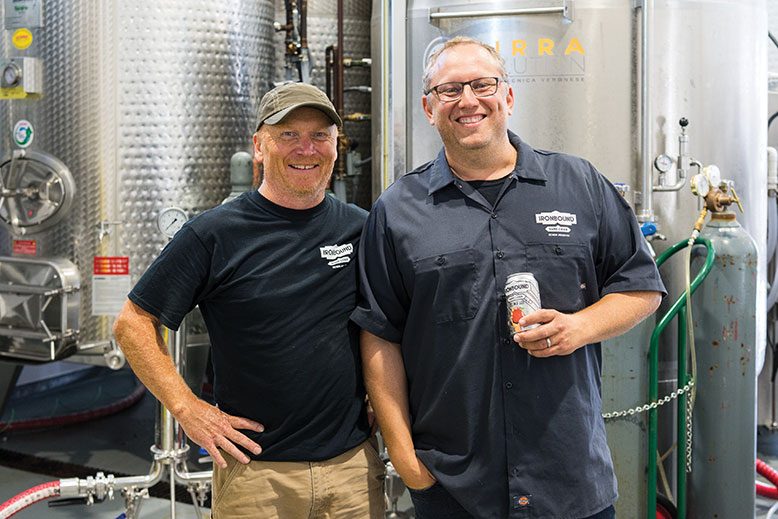 In his former life as an ad man, Montclair resident Charles Rosen helped launch Mike’s Hard Lemonade and Svedka vodka. “So I know the business,” he says. “And cider is the fastest-growing sector of the liquor market.

“Hard cider,” he adds, “really was the original Jersey drink. And Newark cider, made from local Harrison and Canfield apples, was considered by lots of people, including George Washington, to be among the finest hard ciders in America.”

Rosen applied his entrepreneurship to his interest in sustainable agriculture and desire to bring jobs to the Greater Newark area, and in 2014 self-funded the creation of Jersey Cider Works. Last June the enterprise released the first batches of Ironbound Hard Cider, named for the historic Newark neighborhood. Ironbound will be sold only in New Jersey, Rosen says, but within the state he intends to “go hard,” taking on national behemoths like Boston Beer Company’s Angry Orchard.

Selling Ironbound in cans adds to its “craft populist” appeal, he says. At 5.2 percent ABV and $11.99 per six pack, Ironbound is also food friendly and competitively priced.

Jersey law requires cider makers to operate adjacent to orchards, even if they source their apples elsewhere. So in 2015, Rosen bought a long-fallow, 108-acre vineyard in Asbury, Warren County. It took months to rip out thorny, invasive Russian olive bushes that had taken over the land and then naturally replenish the nutrient-starved soil. Rosen renamed the property New Ark Farms, a reference to the name given Newark by its Pilgrim founders.

Today, New Ark is home to Jersey Cider Works and a haven for nearly extinct Jersey cider apples—including the rarest and most revered varietal, the Harrison, obtained from a preservation-minded Virginia farmer. The team found another specimen in South Orange and others as far away as upstate New York.

Under the care of orchardist Peter Tischler, about 10,000 grafted saplings should begin yielding usable, organic fruit in a year. Even then, and at least for a while, Rosen will continue to buy the eating and bittersweet cider apples from local family farms that Ironbound began with.

To craft his recipes, Rosen hired award-winning winemaker Cameron Stark from the highly regarded Unionville Vineyards in Ringoes. Stark, 57, trained at University of California, Davis, and honed his skills for 13 years in the Napa Valley. He still makes wine in Unionville once a week. The rest of the time, he’s steeped to the core in cider.

“Back when cider was a mainstream drink,” Stark says, “they were using apple varieties that had acids, tannins and interesting flavors, much like wine-making grapes. Apples grown today lack tannins, acids and character. The older varietals we are growing and using add that complexity and allow me to make a cider that has a fresh apple flavor and a hint of funk.”

Making great hard cider is just part of Rosen’s larger vision. He’s positioning New Ark Farms as a model of sustainable agriculture. He’s also doing what he can to provide jobs and training for some of Newark’s most disadvantaged workers.

“I’ve worked with Columbia University to create a comprehensive work- and life-skills program for ex-offenders that allows them to get out of their toxic home environment, earn a living wage and do meaningful work here on the farm,” he says.

Rosen is also gunning to move as much of his processing, distribution and warehousing operations into job-starved Newark as the state will allow.
But he doesn’t want people buying Ironbound for its do-good backstory.

“People should drink Ironbound because it’s complex, interesting and truly delicious,” he says. “And they don’t need to apologize that their drink is Jersey made. They should be yelling it from the rooftops!”