The Beyond Burger, a plant-based patty, is made with pea protein. Beet-juice extract mimics the bloody juices of real meat. Photo by Michael Persico

A new generation of plant-based burgers is sprouting up in the Garden State. With names like Impossible Burger and Beyond Burger, they look, cook and taste like meat. Yes, they even “bleed” like meat.

If you’ve dined out over the last six months, you’ve likely seen and perhaps tried them. You can eat the Impossible Burger at the Pet Shop in Jersey City, Taphouse 15 in Jefferson, Keg & Kitchen in Haddon Township, or the Brickwall Tavern in Asbury Park and Burlington, among dozens of other restaurants.

The Beyond Burger is available at select retailers, including Whole Foods, Kings and Wegmans, as well as in restaurants such as Seed Burger in New Brunswick and chains like TGI Fridays and Zinburger.

Even fast-food chains like Burger King, McDonald’s, White Castle, Red Robin and Carl’s Jr. are jumping on board the fast-growing trend, adding either the Impossible or Beyond to their regular burger lineups.

Despite being made from plant-derived ingredients, they’re often the same price as—if not more expensive than—traditional beef burgers. But that hasn’t stopped vegans and non-vegans from ordering the new burgers.

“Meat eaters try them and they can’t believe it,” says Kevin Meeker, owner of Keg & Kitchen, who added an Impossible Burger to the menu earlier this year. He was surprised when he saw how quickly they sold. “Not a single person eats one and says it isn’t good.”

But are the burgers good for you? That’s a different question. 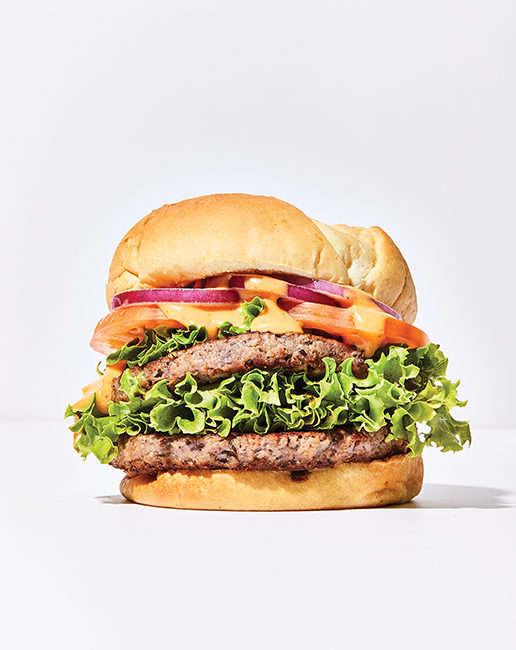 Both the Impossible Burger and the Beyond Burger were created by Silicon Valley food-tech start-ups and debuted in 2016. (Beyond’s vegan chicken substitutes became available in 2013, and a vegan beef product in 2014; the burger followed.) It was the perfect time. Consumers, growing more health conscious, were looking for plant-based foods, and the companies marketed the new burgers accordingly.

Now national demand has surged to the point of creating shortages. “You cannot supply enough of the product,” says Nolan Lewin, director of the Rutgers Food Innovation Center (FIC). “There’s no end [to their popularity] in sight.”

The Impossible and Beyond burger recipes differ, but both companies are focused on replicating the taste of beef using plant-based alternatives. The Beyond Burger uses pea protein. Beet-juice extract gives its patties a bloody appearance.

To achieve a meat-like appearance, Impossible Foods uses an innovative molecule called heme (as in hemoglobin, ordinarily found in animal blood and muscle tissue). The lab-made ingredient, derived from soy plants, is fermented with genetically engineered yeast. The result is an iron-rich, plant-derived compound that gives the burger a reddish tint and helps it brown and sear like a meat patty.

The label “plant-based” is true, as far as it goes. But the patties contain more than just plants. In addition to pea protein and beet-juice extract, the Beyond lists canola oil, refined coconut oil, potato starch, maltodextrin and other food additives as ingredients. The Impossible contains, among other things, coconut oil, sunflower oil, potato protein, methylcellulose (a synthetic cellulose-derived food stabilizer), cultured dextrose and modified food starch. In short, the new-wave vegan burgers are processed foods.

“I sort of look at it as a Frankenmeat,” says Ian Keith, head chef for Harvest, a café at the New Jersey Institute for Food, Nutrition and Health at Rutgers that serves whole, minimally processed foods. Keith doesn’t hesitate to call the Impossible Burger a “heavily processed patty.”

“They’re marketing it as being healthier because it’s low cholesterol and vegan, but when you look at the breakdown of nutrition, it really isn’t a better choice,” says Peggy Policastro, a registered dietitian nutritionist and director of behavioral nutrition at the New Jersey Institute for Food, Nutrition and Health at Rutgers.

The burgers, she adds, are “worse nutritionally. They’re a lot higher in sodium because they’re processed, and very high in saturated fat [such as coconut oil], the type of fat mostly associated with cardiovascular disease.” Traditional plant-based burgers, made from plants, have a good amount of fiber in them, Policastro notes. The two new vegan burgers don’t contain any.

Policastro says the Impossible and Beyond cast a “health halo,” meaning a perception that a particular food is good for you even when there is little or no evidence to confirm it. Marketing a product as “healthy” or “low-carb” is often enough to generate a halo.

“Anything that’s going to move the needle to a more plant-based diet is a good thing,” says Keith. “Do I necessarily agree that this is the best way to introduce plant-forward thinking? I don’t believe so.”