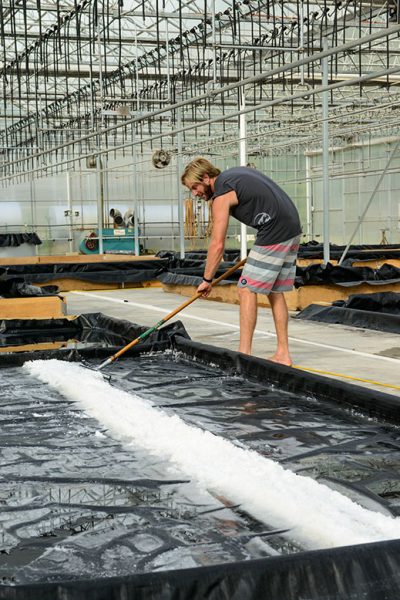 Lucas Manteca brooms salt out of evaporated South Jersey sea water. Salt can be made all year, but texture and flavor change with the seasons.
Photo by Paul Bartholomew

“To a chef,” says Lucas Manteca, “salt is everything.” He should know. As the chef/co-owner of two South Jersey restaurants, Quahog’s Seafood Shack in Stone Harbor and the NJM Top 25 Red Store in Cape May Point, Manteca understands the centrality of salt as preservative, flavor enhancer, and even just pristine flaky substance to grab lustily between one’s fingers.

Or, as he colorfully puts it, “shakers piss me off. Salt should be sensual.”

Salt can be mined, but to connoisseurs, the best salt comes from the sea. And the sea has always been central to Manteca. He grew up surfing the coast of his native Argentina and now avidly rides the waves of the southern Jersey Shore. When he and his wife, Deanna Ebner, a native of Avalon, opened their first restaurant in Stone Harbor in 2005, they called it Sea Salt. The name coincidentally saluted one of the barrier island’s original industries, saltworks.

Lacking local sea salt, Manteca ordered the best he knew of, French fleur de sel. After about a year, he took up salt making as a hobby. In the backyard of their home in Cape May Court House, Manteca poured Stone Harbor ocean water into flat, foil-lined trays to evaporate in the summer sun. He envisioned placing a dish of the salt on every table in the restaurant, but the yield was too small. He used it in the kitchen to season octopus, crab and other dishes.

“I wanted to help people realize the simple beauty of good salt,” Manteca reflects, “to help them understand what it can do—make sweet sweeter and savory more savory. I wanted to be a part of that movement.”

Fast forward 10 years. Sea Salt the restaurant is gone, but what began as a hobby is now a business: the Cape May Sea Salt Company. This summer Manteca and business partner Derrek Thomas began selling packages of their handmade sea salt in packages of 4 ounces ($9) up to 1 pound ($36), with an old-fashioned, black-and-white label largely designed by Ebner. They also offer a pecan-wood smoked sea salt at 4 ounces for $10.

“Lucas is my Argentinian brother,” says Thomas, who, with his wife, Stephanie, owns Windy Acres Farms in Ocean View, where the partners evaporate local sea water in a huge greenhouse. “When we started experimenting, we were getting a rock-salt type of product that I thought was fine, but Lucas is a perfectionist. He wanted flakier, more beautiful crystals, and we now have that after months of fine tuning.”

The process begins with pumping sea water at a beach in the vicinity of Avalon on the calmer side of a jetty (where the water is less turbid). The spot Manteca found has higher-than-average salinity and a more pungent minerality than the marshy water along the Delaware Bay nearer to Cape May Point.

If it rains, Manteca waits three days for storm runoff to clear. Then he runs a fire hose with a strainer tip into the water, fires up a pump and fills two 750-gallon plastic tanks mounted on the back of a truck. (The tanks are cast-offs from Hawk Haven Winery and Vineyard in nearby Rio Grande. “We’re very into upcycling,” says Thomas.)

Inside the Windy Acres greenhouse, the new water is pumped into one of three backyard-type above-ground swimming pools, each with a capacity of 4,000 gallons. The seawater sits in the pools for about four days to let sand and seaweed settle to the bottom.

Then about 1,500 gallons of seawater is pumped through filters into the first of a series of long, shallow evaporation troughs built by Manteca. (Handy and project driven—”I’m go-go-go”—Manteca also did much of the design, carpentry and painting at Quahog’s, Red Store and Little Store, his and Ebner’s new bakery at the north end of Cape May.)

With the temperature in the greenhouse near 160 degrees in summer, the water in the trough can lose 25 percent of its volume in a day (up to a week in winter). Then it is pumped through a filter into a second trough, and the first trough is refilled. By the time the water, refiltered each time, reaches the fourth and final trough, it is a thick, slushy brine.

With a wooden rake, Manteca pushes the emerging salt crystals into a snowy ridge that runs all the way down the center of the trough. This is where, figuratively speaking, he dons his chef’s toque. Sea salt is composed of several types of crystals in addition to basic sodium chloride, NaCl. One of them, magnesium chloride, takes longer to crystallize than the others. It imparts its own characteristic flavors. Too much MgCl₂ will turn the finished salt bitter, so Manteca’s goal is to rake up the just-right Goldilocks amount.

The final drying takes place in the back of an old truck outfitted with wooden racks and a powerful dehumidifier. Each 4,000-gallon pool of Avalon-area seawater yields about 500 pounds of lightly flaky, bracingly delicious Cape May Sea Salt.

“We have packaging parties at the farm,” Manteca says. Everyone pitches in. “I get to spend time with my daughter [Catalina, 7]. I’m hoping to build a business for her, a cool business that she will be proud to take over someday.”

A free spirit, Manteca surely realizes that Catalina might take after him and carve her own path. She could do worse than inherit dad’s work ethic. Most of his salt labor takes place between 5 and 8 am, before he digs into the needs of his two restaurants and the new bakery.

“I wake up in the morning feeling so alive,” he says. “Yes, I’m tired. Sometimes I don’t get home until after 1 am. A former boss used to call me restless. That can be bad when you work for someone else. When you’re your own boss, it’s okay.

“I’m still a little bit of a psycho with all the projects,” he admits, “but the salt keeps me calm. It’s a different pace than the restaurants, because I am dependent on tides, humidity, sun. You have to wait for nature. You are linked to it.”