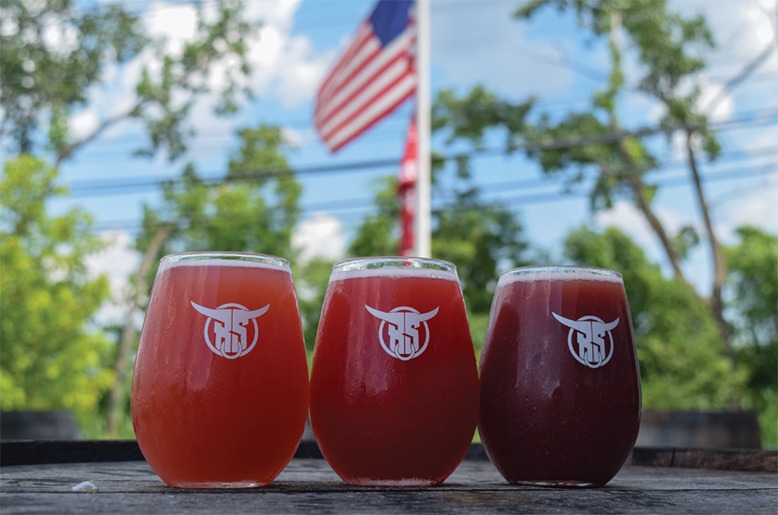 Though they start with a simple sour-beer base, “smoothie doesn’t necessarily mean sour,” says Scott Wells, director of sales at Bolero Snort Brewery in Carlstadt. That’s because varying amounts of fresh purée—strawberry, raspberry, peach, passion fruit, mango, orange or guava—are added to the beer. This leads to higher levels of residual sugar in the final product.

To make traditional fruited sours, fruit is added to the beer after the first fermentation, triggering a secondary one that boosts the ABV and introduces effervescence, similar to how Champagne is made. In that method, “a lot of that sugar and pulpiness gets fermented out,” says Eric Ruta, founder of Magnify Brewing in Fairfield. “Traditionally, that makes a much more stable product.”

To achieve the lush texture that smoothie-style beer enthusiasts yearn for, purée is added after the initial fermentation. By leaving the fresh fruit unfermented, the resulting beer looks, smells and drinks like a fruit smoothie, but can range from 5 to 11 percent ABV. After the desired consistency is achieved, brewers may add vanilla beans, milk sugar (lactose) or spices to fine-tune the flavor. Then, the beer is canned before a second fermentation.

At Bolero Snort, Wells happily reports that smoothie-style ales are flying off the shelves, but wishes more consumers knew how to properly store them. It’s important, for instance, to keep cans of smoothie-style beers consistently chilled. Because they contain unfermented sugars, the beers are at higher risk of undergoing a spontaneous second fermentation in the can. “They absolutely have to be kept cold,” says Wells. “If you let them get warm, the cans will explode.”

Ruta and his team spent more than a year honing a proprietary process to prevent that from happening. “It took a lot of time to get right,” he says.

The response to the new smoothies has been so positive that other Garden State brewers, like Pennsauken’s Double Nickel and Cape May Brewing, have also had a hard time keeping up. Luckily, brewers like Ruta embrace the demands of this challenging style. “They’re really expensive and time-consuming to make,” he says. “But we like pushing the envelope rather than making the same beer week in and week out.”