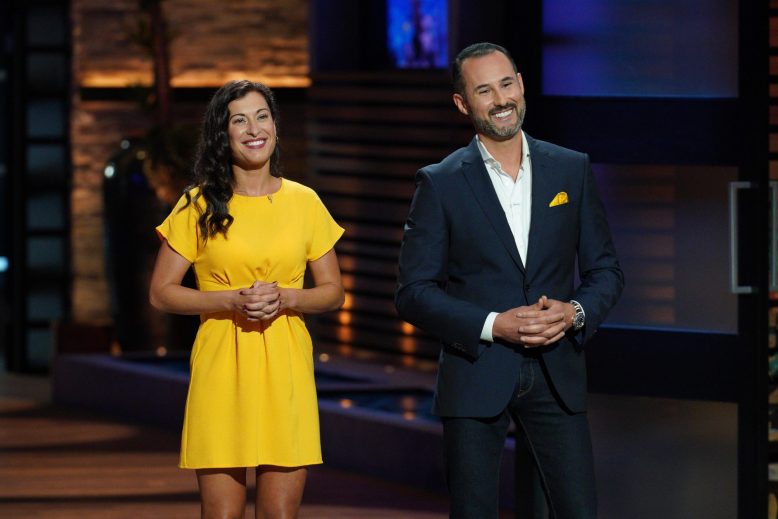 Renee Heath and Bechara Jaoudeh have seen an uptick in sales since pitching their product, Banana Loca, on "Shark Tank" last year. Courtesy of dgepress.com

Heath left the Poconos and returned to her hometown of Basking Ridge to settle down and raise her family. In 2019, she and her business partner, Bechara Jaoudeh, began working on a new project and invented Banana Loca, a kitchen tool made for coring and filling a banana with goodies such as Nutella, peanut butter, honey and more.

“Bananas are too much fun, and in the shape of a smile,” Heath says. “We really jumped right in to make this our project.”

After launching the product for sale less than a year ago, Heath and Bechara traveled to the West Coast, where they presented Banana Loca to the Shark Tank investors. The episode premiered in December. After closing a deal with not one, but two sharks—Mark Cuban and Kevin O’Leary— Heath says she is over the moon.

“We’ve seen ages 3 years old to grandmas saying it made snack time fun,” Heath says. “It is so special to be a part of that.” Mark Cuban, left, and Kevin O’Leary test out the Banana Loca on “Shark Tank” before investing in the product. Courtesy of dgepress.com

How did the idea for Banana Loca come about?
Renee Heath: My business partner Bechara grew up in Lebanon, and a very popular snack there is peanut butter or Nutella on pita bread. He was looking up recipes one day for banana and Nutella combinations and had a eureka moment. We had started a professional relationship back in 2010—we love gadgets, and always wanted to do something like this one day. Almost every household in America has bananas, and it was perfect timing with everything aligning.

What was it like developing an idea into an actual gadget?
It was a lot of trial and error. We were looking at things like piping bags for cupcakes and trying to figure out the physics of the whole thing. We enlisted an industrial design firm to help make sure it was easy for the whole family to use. We ended up prototyping and 3D printing a lot of things that helped push us to the functional product you have today.

When did you launch Banana Loca?
In early 2019 we were prototyping, and in May 2019 we went to the open casting call for Shark Tank. Even though we were pre-revenue they said it was a good idea and told us to get some sales under our belt. We jumped into production and began learning the manufacturing and logistics. We’ve been live on Amazon and on our website for almost a year now. Banana Loca can be used to stuff bananas with Nutella, peanut butter and other treats. Courtesy of dgepress.com

What has been the reaction?
People are going bananas! The videos and pictures that we get, especially on Instagram and TikTok, are amazing. We see families and people of all ages using it. Many kids are told things are sharp in the kitchen, or pots are too hot. Banana Loca is a safe way for kids to be involved in making their meal or snack.

Do you have a favorite recipe?
On our website, we have adult versions of all the recipes. For example, I like doing vanilla-flavored fluff, so I inject it, peel it and put it in the freezer as a little frozen snack!

Can Banana Loca be used for things other than bananas?
My mom uses it to put cottage cheese in a cucumber. We’ve had people do fun things like inside-out hot dogs, putting the mustard and ketchup inside. And with sausage and peppers, putting the marinara inside. I’ve seen cake and cupcake decorating, filling a churro with Nutella, jalapeño poppers filled with cream cheese, all sorts of things.

What was your experience on Shark Tank?
We worked with producers, and you continuously update them on your business and how it’s doing from a numbers perspective. You also work on your pitch. We had a lot of video chats working on what messages we wanted to send to those at home and what will work with the sharks. We filmed in July, and before we went on we did practice runs with producers to make sure we felt comfortable in front of the sharks. The filming was really intense. You hit your mark and go, and there’s no cutting or restarting.

What was the deal you struck with the sharks?
We did 25 percent of our business for $250,000, which was our original ask. It’s with Mark Cuban and Mr. Wonderful, aka Kevin O’Leary. Having two sharks on board, not just one, is just a dream. Since the show, we’ve gotten requests for wholesale all over the globe.

What are your hopes for Banana Loca?
My hope is to one day have a food service version. So think about an ice cream parlor making sundaes, or smoothie stores and pretzel shops. We can have different outlets that actually retail bananas with whatever filling is appropriate.