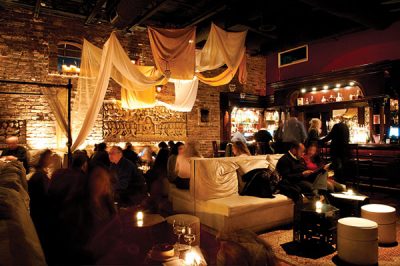 —It’s only been a few days since chef and owner Thomas Ciszak closed the doors on his longstanding Paramus hot spot Chakra on August 31. The restaurant had been in business for 15 years, with Ciszak at the helm for the past 10, so closing it wasn’t an easy or simple decision. In fact, it was a necessary choice for the chef, who’s on the verge of opening a new concept—Brasserie Mémère—in Closter Plaza sometime in the fall. The restaurant is a sharp left-turn for Ciszak, veering away from the sleek eclectic plates of Chakra toward a decidedly rustic but polished take on classic French brasserie fare. Ciszak doesn’t leave Chakra lightly, and notes on the website that he and his wife and partner were “overwhelmed by the outpour of love.” Fans of certain signature Ciszak dishes can still taste some of his influence at Blue Morel, where he oversees food as VP of Food & Beverage for Island Hospitality Management. Chakra, 144 Route 4, Paramus.

—In January we reported on the regrettable closing of Espo’s in Raritan after the passing of Robert Esposito. Nine months later, we’re happy to report that as of August 29, Espo’s is once again open for business seven days a week. As for how the spot made a comeback, its iconic status may have played a part: the location was eventually purchased by a new owners Nick Zamora and Kevin Sempervive, who plan on operating the 45-plus year spot according to longstanding, beloved traditions. Espo’s, 10 2nd Street, Raritan; 908-685-9552

—Building on the success of their first El Guacamole in Millville, and after more than a few requests from visiting Ocean City locals, culinary couple Eric Herrera and Paulina Reyla opened El Guacamole II on 14th Street in Ocean City. The second location is bigger than the first, occupying the former home of Ivy Pho Vietnamese restaurant, with a menu from Herrera faithful to the first location, traditional Mexican fare laced with Oaxacan specialties. Two floors at this location with some al fresco options—and the beach just about five blocks away. El Guacamole II, 403 East 14th Street, Ocean City; 609-938-2698

—Foo Bao (which means “Lucky Bun” in Chinese) is open on Beach Avenue in Cape May, specializing in Asian street foods—more specifically, Gua Bao, an unwrapped or open-faced version of traditional Chinese steamed buns. Fillings include Sweet & Sour Duck, Asian BBQ Pork, and Tofu & Veggie Curry, all paired with a side Green Papaya Salad. The couple behind the restaurant are Amy Khao and husband (and chef) Lulzim Rexhepi. Foo Bao, 713 Beach Avenue, Cape May; 609-884-3190

—The people behind the Barrow House in Clifton and Cowan’s Public in Nutley as well as the just-Grand-Opened Vanguard in Harrison have yet another project set to open in Jersey City in mid-November. Franklin Social Tavern & Garden will be the fourth project for Skopòs Restaurant Group (which focuses, so far, on northern Jersey). While there aren’t much details as of yet—the company is still, as of this writing, looking to hire a sous chef—chances are the menu will veer toward modern American with smart touches of comfort food and a decent craft beer and craft cocktail programs, all (likely) ensconced in at least a hint of nostalgic design. But you can see for yourself; just keep your eyes peeled come Thanksgiving season. Franklin Social, Jersey City; no phone yet.