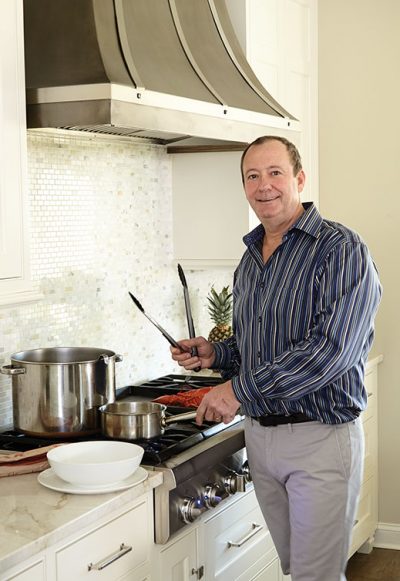 Chef Kevin Kohler liked to get his hands dirty. Not just in the kitchen, doing the meticulous prep work that set the stage for sumptuous meals at Cafe Panache, his Ramsey BYO, but in the field. He often bought produce from Abma’s Farm in Wyckoff, and was never happier than when he could wade into the rows and pluck or dig up exactly what he wanted for the restaurant that night.

Kohler, 63, died suddenly on Wednesday. “We’re not sure what happened; it was very sudden,” said his oldest daughter, Kristie Messano, one of his four children. “He was an incredible grandfather to three, and there’s another on the way. He was the kind of person you could count on, no matter what.”

Cafe Panache, a BYO that Kohler opened in 1985, was steeped in the French cuisine that Kohler studied at Brooklyn Community College, but it was driven by his tireless sense of adventure and discovery. Cafe Panache earned a recurring place on NJM’s annual Best Restaurants lists.

Every year, when I put together the list, I call each chef and talk to them about what their current passions are, what drives them. Kohler would never lack for an answer. Sometimes he’d be leaning more Asian, sometimes more Italian, always enthused about the new season and its produce. His cooking wasn’t far out or complicated, but it was lively and detailed. I remember terrific softshell crabs one spring in a ginger-carrot sauce, handmade agnolotti in basil cream sauce another time, and an intense dessert of blackberry soup with lavender-flower ice cream.

“He gave people what they wanted,” Messano said, “but his desire was more California, fresh flavors, fish—that’s what he was passionate about.”

Kohler grew up in Cedar Grove. “He took a home ec class in high school, probably to be around the girls,” Messano said, managing a chuckle amidst her sorrow. “His mother also taught him a love of cooking. After culinary school, he did an externship at the Four Seasons [in Manhattan].”

Returning to New Jersey, Kohler cooked for awhile at Jimmy Reid’s, a now bygone nightclub on Route 17 in Ramsey, not far from where he would eventually establish a lasting presence.

Unlike some chefs who become owners, Kohler never seemed to tire of cooking. As for his four children, “He pushed us away from it and made sure we all went to college,” Messano said. “He taught us to work hard; every single one of us worked at the restaurant. As a kid, I learned the value of hard work early on because of my father.”

“I’m a dinosaur in a way,” Kohler told me in a conversation in 2018. “I joined Open Table [the online reservation platform] in 2015, just for the convenience of our customers. Open Table would plot out the seating in the dining room if we let it, but it wouldn’t work for our customers. We know them, we know the tables they like. Certain customers need certain spots.”

In a text message he sent me in 2019, he wrote, “I probably have 20,000 recipes in a library of a lifetime of note-taking and cleaning up poor recipes out of magazines and cookbooks that one day can turn into 15 cookbooks.”

Messano confirmed that interest. “Every minute of free time he would read cookbooks and learn and share what he learned with us,” she said. “He cared so much about cooking and having the best restaurant, and he put every ounce of his effort into it. We loved him more than anything else in the world.”