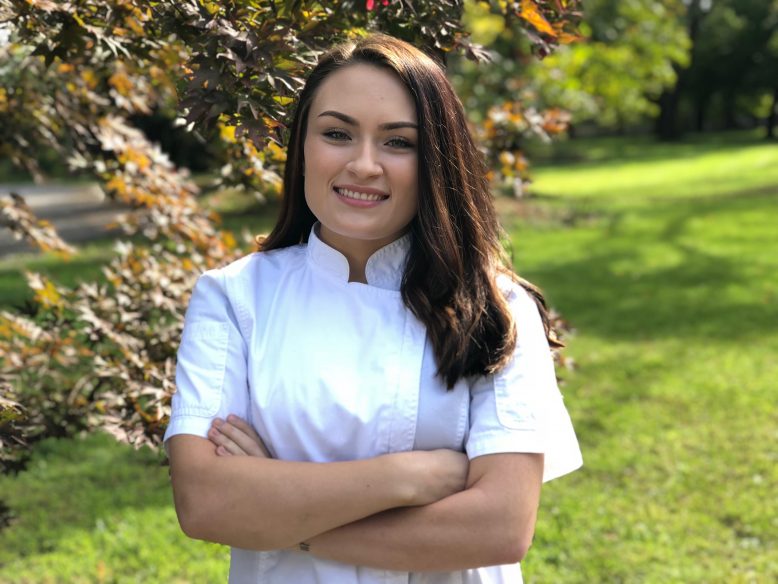 When Kaitlyn Algarin, 23, took over the pastry kitchen at Viaggio (one of NJM’s 30 Best Restaurants) in early September, it wasn’t just the Culinary Institute of America (CIA) grad’s first time in charge of a kitchen. It was her first “very own” menu, her first job in close coordination with another head chef, Robbie Felice, and her first real foray into the world of Italian dolci. Nor did Algarin realize when she took the job that all of these firsts were about to double.

When Felice opens Osteria Crescendo in Westwood in early 2019, it’s Algarin who will be in charge of the pastry. We caught up with Algarin after Thanksgiving to ask her about her new role and the restaurant to come.

Table Hopping: You externed at Latour. How did that prepare you for Viaggio?
Kaitlyn Algarin: I was there for five or six months, basically doing all the pastry. It was great. I got the opportunity to have my own station. I wasn’t really expecting that so quickly. It really made me realize I wanted to be in the restaurant industry, not a bakery. I like the fast-paced feel, the creativity to produce different desserts whenever you want.

TH: How did you get the job at Viaggio?
KA: I actually met Robbie [Felice] a few years back. He staged at Latour when I was working there. We followed each other on social media for a few years. I was keeping up with his restaurant. One day I saw they were looking for a pastry chef. I asked them about it and came in for a stage one day—dinner service on a Friday night. I followed the pastry chef at the time around, got to observe the flow of everything, how it went, how they ran the restaurant. I took the job the next day. TH: What was it like stepping into the lead role?
KA: It was a transition, for sure. I’d never had the full responsibility of being a pastry chef. Coming from a large catering company [Cedar Lakes Estate in Orange County, New York], I was used to very big-scale pastry production. But I felt like I was ready. I needed something new. I needed to have the creativity the restaurant would give me.

TH: You studied classic pastry at the CIA. What’s it like doing exclusively Italian dessert?
KA: You can make any Italian [dessert]—if you do your research. I had no idea what “budino” was before I came here. There’s a lot of [Italian desserts] I’ve discovered. And the ingredients—a lot of nuts, pine nuts. There’s a classic pine nut dessert on the menu that’s been here since Viaggio opened—a very traditional Italian dessert. Almonds, Amaretto, a lot of citrus, oranges, lemons. I love working with lemons.

TH: How do you and Robbie work together creatively—and seasonally?
KA: We piggyback off each other. He’ll have an idea, I’ll have an idea. We just put a new item on the menu—Chocolate Budino. It’s the first [dessert] I created all by myself. It’s like a pudding. It has orange curd, hazelnut brittle, chocolate espresso crumb cake, and dehydrated chocolate mousse. In general, I’ll present a dish to him; if I struggle with one component, he’ll give me an idea. Sometimes he’ll come up with an idea, like the Plum Upside Down Cake. He wanted to do something with plums and grapes, we came up with a Plum Upside Down Cake with a grape reduction. We change the menu very seasonally. Plum just went out of season, so we switched that dessert out with the Chocolate Budino.

TH: Do you feel ownership of the dessert menu now?
KA: For about two weeks, we continued with the menu that was already there, slowly adding and replacing with my desserts… It’s fully my process now.

TH: Did you know about Robbie’s plans for Osteria Crescendo when you took the job?
KA: I did… It’s exciting. I feel like I’ve had enough time here to be able to do both. For now, I plan three days a week at the new restaurant, two days [at Viaggio].

TH: Can you tell us anything about Osteria’s desserts?
KA: It’s going to be similar to Viaggio, with a few twists, a few changes…