The restaurant has a minimalist décor with white leather chairs and booths and lots of dark wood. Specials were written out with their prices. Greek olive oil and Greek sea salt were on the table, and marinated olives and warm bread were brought as soon as we were seated.  When we dined there, owners executive chef Niko Basis and pastry chef/ Maria Filippidis were in the process of obtaining a liquor license, so check to see if they are still BYO.

Entrées were mixed. The items on the Modern-Greek-fusion section of the menu can be recommended. A delightful version of octopus casserole was created with baked octopus, onions, olives, capers, tomatoes and orzo; a hearty and well-seasoned dish. Equally memorable was an earthy mushroom risotto with peas, carrots and a touch of cream. Two Greek classics were not as pleasing. Lamb cubes in the kebab with onions, peppers and tomatoes were tough and almost unchewable. And while the presentation of mousaka in a soufflé dish was innovative with a topping that reminded us of crème brulee, the dish was dry and flavorless. A side of horta—dandelion greens, which usually are slightly bitter–looked and tasted like escarole. When we asked the waiter what they were we were told they were sweet dandelion greens.

Two desserts were shared. Unfortunately, the baklava with walnuts and almonds encased in filo dough tasted as if a fistful of cinnamon had been put into the mix creating a dry and slightly burning sensation in our mouths. What we also found strange was that a clove was in the baklava creating an off-putting smell. Half of the Nutella ek-mek, a delicious Nutella mousse was eaten but not the undercooked shredded filo dough it sat on.

Antik Greek Kitchen is open Tuesday through Sunday from 11:30 AM. 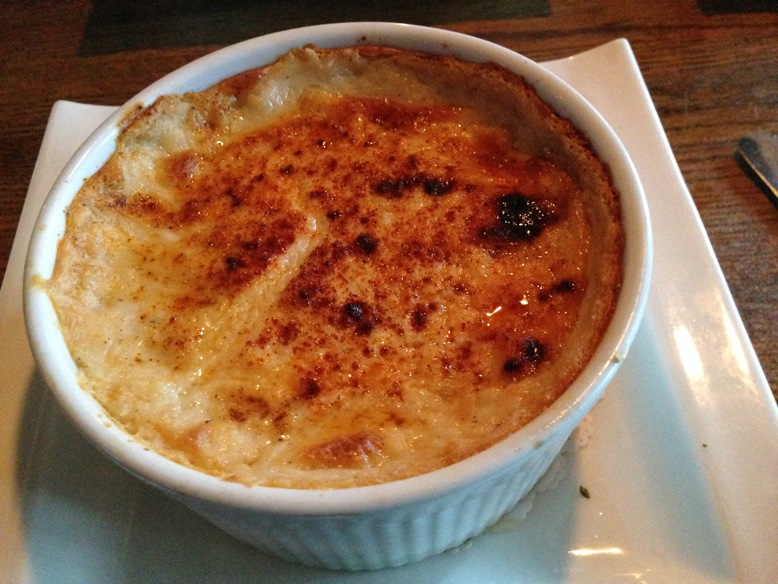