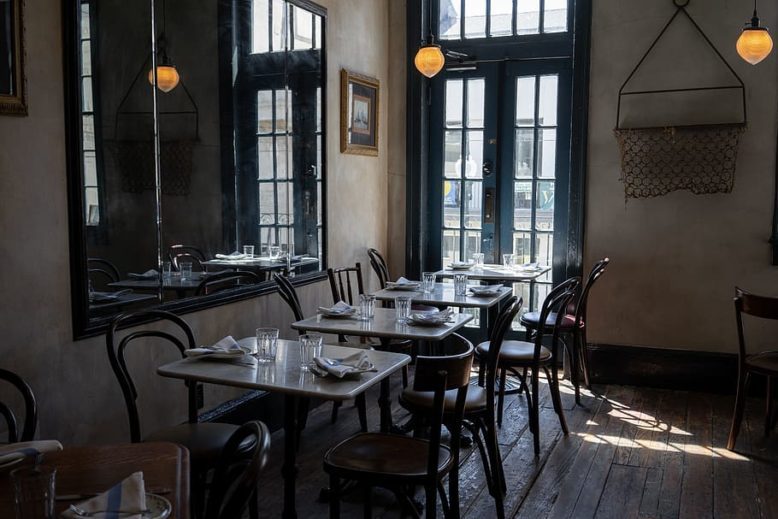 Less than a week ago, everything seemed normal in restaurants across New Jersey. Hostesses sat patrons gearing up for their usual weekend outings, servers briefed them on the specials of the day and took their orders, bartenders shook up cocktails and poured glasses of wine as usual and chefs prepared plate after plate of fresh fare to feed guests.

Now, the once-bustling dining rooms are empty. Chairs remain flipped and stacked on tabletops and bare-bones staff prepares takeout meals in restaurants that opted to try a takeout and delivery service model.

On Monday, Governor Phil Murphy announced that all restaurants and bars in New Jersey must close their dining rooms, and could only remain open for takeout or delivery until 8pm, in a dramatic effort to enforce social distancing to reduce the spread of COVID-19.

According to the National Restaurant Association, restaurant and food service positions in New Jersey accounted for nearly 350,000 jobs last year, making up 8 percent of employment statewide.

The closures hit the restaurant industry hard, and thousands of workers had their hours slashed or became entirely unemployed overnight.

Faced with the drastic measures, local restaurant employees are doing their best to keep afloat and support their staff, community and themselves.

How Restaurant Workers Are Coping With Sudden Lay-Offs

Nicole Salas, 34, has worked in restaurants for almost a decade. A full-time lead server at Talula’s in Asbury Park, she is now filing for unemployment after her hours have been reduced drastically. While the popular pizzeria is still offering to-go food and beverages and doing what they can to support their staff, the shifts are nowhere near as abundant as they were a week ago. The amount Salas expects to earn per month through benefits will leave her with almost nothing after rent. “That’s for car insurance and health insurance, which is already all of it,” she says. “And that doesn’t include cat food or food for myself or anything else.”

For tip-earning employees, unemployment benefits use an average of what the employee earned hourly to determine what to award each applicant. This proves to be problematic with the unstable nature of tip-based income.

“There have definitely been times that I’ve made $6 an hour, and in the same week made $35,” Salas says. “So that one bad day brings down my entire average.”

Salas is looking into delivery jobs with app-based companies like Instacart and Postmates during restaurant shutdowns. And while she greatly enjoys working in the service industry, it’s impossible to ever count on it completely. “Money is good when it’s good, but you can’t bank on it. You can’t ever rely on it,” she says.

Kelly Bruett, 28, works as a server at two Point Pleasant restaurants; Half Moon Point and Point Lobster Bar and Grille.

“Friday night and Saturday were like any other night for the most part,” she says, “and then Monday was bizarre. After having four tables all day, we closed.”

Bruett, who has lost 100 percent of her shifts, says she feels secure enough to last for a few weeks without work but is uneasy about how long the shutdowns will actually last. “For me, it’s the unknown that’s the scariest,” she says. “I’m trying to hold on to positivity. But if it’s closed longer than a month, I’m going to start really worrying financially.”

Bruett plans to apply for unemployment but hasn’t yet due to the slow and overburdened website.

Michelle Mancuso started her own vegan baking company, Cats Luck Vegan, three months before COVID-19 rocked the food industry. She was baking out of the kitchen of Sami’s Street Food in Asbury Park to fill both the baked goods case at the restaurant and wholesale and custom orders for her own business. With the closures of restaurants statewide, Mancuso has been forced to discontinue her work. “I just threw all my savings into starting this business and now it has to come to a screeching halt,” she says.

Now, Mancuso is feeling nervous about the future. “I have bills to pay,” says the 29-year-old. “My husband also works in the service industry, so we are both out of work right now.”

Jon Stolpe, Mancuso’s husband, worked behind the bar at the House of Independents, an events venue on Cookman Avenue in Asbury Park, as well as restaurant Karma 2 go; both of which have now completely closed.

Stople is able to file for unemployment through his employers, but Mancuso is unsure about any source of income for the foreseeable future. ‘“As a new business owner I don’t really even know what the option for right now is,” she says. “I have no idea.”

Laura Brahn, chef and co-owner of Cardinal Provisions in Asbury Park, spent her first morning after the statewide closures delivering food to community members who want to support the small business, but who feel unsafe leaving the house.

Delivery is just one of the changes the eatery has made due to the coronavirus outbreak.

“We’re working on takeout orders, doing family-sized carry out dinners, and trying to maintain the ability to feed those who are the most at risk right now,” says Brahn. “[Such as] children who won’t have their government-subsidized meals, the elderly and immune-compromised and local industry workers who don’t know when their next paycheck is coming.”

Brahn, who runs Cardinal with business partner Grace Crossman, acknowledges that these are uncertain times, and each day will present new challenges. But she says the community support she has seen gives her hope. “I feel like the same amount of times that we cry because we feel scared, we also cry because we have people calling who want to just buy a $500 gift card or put money down now on their July wedding,” she says. “People are making me feel so grateful and hopeful.”