Real New Orleanians may or may not eat quiche, but they surely will cotton to the savory alligator cheesecake at Quarter House in Point Pleasant.

It looks like quiche: a wedge-shaped slice garnished with a spare sprinkling of minced herbs. But it ranks higher on the richness scale and could sate anyone who has worked up an appetite dancing to zydeco around the French Quarter all night.

Thank chef Jesse DeDreux, in charge of the kitchen at this newcomer from proprietor Scarlett Dell.

In the cheesecake, chunks of hearty alligator sausage populate an eggy custard plied with smoked gouda. Panko crumbs mixed with romano cheese forms a firm crust. The caloric intake might make some wince. I don’t believe in wincing when I eat, so just paint a target on my back. DeDreux hits the bullseye with this one.

Also with his charbroiled oysters, six to a starter platter, puddled in butter and topped with a serious shake of grated parmesan and romano.

Excessive? Maybe. If you want spare and pure here, order your oysters freshly shucked on the half shell. You can go pure – at least, somewhat. Mussels, for example, in a broth boosted by sparkling wine laced with garlic and bits of peppers and onions. It’s about as simple as things get at this homage to the Big Easy, which occupies the ground floor of a century-old house.

Remember blackened redfish? It’s here, and the menu claims the fish comes from the Gulf. It’s properly cooked—sweet and mild and substantial—and all but smothered in blue crab meat made creamy by (well, what do you think?) cream and butter. You’re catching on.

Count on another entree, grouper crusted in andouille sausage, to pack a punch. It combines smoke and heat from the crumbled sausage with a fiesty chili-powered cream sauce. Anything but boring. Sides with these entrees were fashionably old-fashioned: skinny green beans and thinly sliced carrots, with smashed potatoes for the redfish and a baked sweet potato for the grouper. 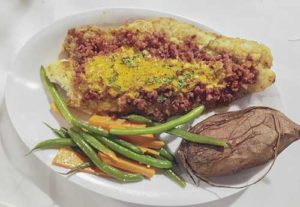 My stomach was stretched enough to allow for dessert. So why not a bread pudding? Unfortunately, it was a tad dry, despite the drizzled bourbon cream sauce.

Next time, I’ll order it with a glass of milk.