Lorena’s, Maplewood
Two things are often said about Lorena’s: The food is extravagantly good, and the prices are high. There’s no disputing the first. The second is a little more complicated. Let’s start with the food. It’s probably never been better. A big reason is that chef Humberto Campos Jr., who owns the restaurant with his wife, Lorena, recently expanded it from 800 to 1,400 square feet, raising the number of seats from 32 to 50 and creating more breathing room in the kitchen, to which he added a professional sous vide setup and other equipment. One result is that his signature entrée, a duo of braised short rib and pan-roasted beef tenderloin, with glazed baby vegetables, buttery potato purée and black truffle veal jus is more tender, more flavorful, more luxurious than ever. In May, halibut with rhubarb, bacon and parsnip purée also was magnificent. For dessert, lovely cardamom-scented panna cotta came with an espresso ganache and coffee ice cream that really tasted like coffee, not like wan café au lait. The revamped kitchen “frees us up to do more stuff,” Campos says. “It’s allowed me to play around more and get a little more intricate with preparations.”

Yet sticker shock is unavoidable with a $48 price tag on the beef duo and $42 on the halibut. You don’t want to hear about chefs’ rising food costs, high rent and thin BYO profit margins. But they’re real. “I’m not buying a Maserati in the next 20 years,” Campos says. Some of his customers might drive such cars, but Lorena’s is not just for the one percent. It’s a special occasion place, for sure. The saving grace is you walk out feeling you got your money’s worth. BYO. 168 Maplewood Avenue, 973-763-4460. While there is no need to reinvent the wheel, you can’t help marveling when someone does it in a way that makes you think you never saw one before. Roughly round and pounded flat, the slices of veal saltimbocca recently served at Luke Palladino, on the mainland opposite Atlantic City, not only brought a wheel to mind, they also, in a few bites, trumped the truism associated with it. The care taken with this classic dish is typical of what is now Palladino’s only New Jersey restaurant. (He opened Palladino’s in Philadelphia in December 2014, but still maintains an apartment in Margate.)

Veal cutlets are pounded thin, covered with fresh sage and prosciutto, pounded again and pan-seared. The sauce, a reduction of white wine, chicken stock, veal jus, shallots and butter, is lush, but the revelation is the mound of local chard under the veal/prosciutto slices. Palladino strips the ribs off the chard and caramelizes them in hot oil. Then he braises the leaves with onions, garlic, salt and pepper and reunites the parts on the plate.

In summer, Palladino tends to cook the food of Southern Italy, working his way north as fall turns to winter. He collects vintage Italian cookbooks. “The food was heavier then,” he says, “because people worked outdoors. Their caloric intake had to be higher. My challenge is making the recipes modern.” In any era, desserts like this spring’s crunchy crumb cake with zabaglione topped with crumbled almonds and sweet/tart chunks of rhubarb would get anyone’s wheels turning. BYO. 199 New Road, 609-926-3030. Daylight doesn’t get its due as an appetite stimulant. While the exceptional food of chef/owner Chris Siversen, the imaginative desserts of pastry chef John Sauchelli and the airy modern design of architect Stephanie Goto reward a visit at any hour and season, there’s something special about summer dining at Maritime Parc. Food this good you really want to see as well as taste. The light is at its zenith for Maritime Parc’s imaginative, wide-ranging brunch menu, served Saturdays and Sundays. At dinner, the huge windows sustain the early evening light. There’s even more light on the patio overlooking the marina, though the view of the reflecting towers of Lower Manhattan competes for attention.

Lately, Siversen has been cooking delicate Japanese eggplant with miso to create a mauve almost-compote that contrasts delightfully in flavor, texture and especially color with pan-seared Sockeye salmon in a bright green sorrel sauce. Sauchelli, who has a mad scientist side, recently gave Siversen a scoop of dark ice cream without telling him what it was. It tasted nutty and coffee-like. Siverson liked it. When Sauchelli said it was fermented black garlic ice cream, Siversen initially balked, but now it is proving popular served alongside panna cotta with brandied cherries and sponge cake. Another dish to savor with eyes as well as palate. 84 Audrey Zapp Drive, 201-413-0050.

Mistral, Princeton
In the last year, Mistral, one of the most engagingly inventive (and scandalously affordable) restaurants in the state, has quietly increased in size from 45 seats to 130. Owners Stephen Distler and Scott Anderson, the latter the executive chef, did this by three-season weatherproofing the patio and creating a Mistral bar with the liquor license they brought over from their first restaurant, Elements, now located on the second floor, just above Mistral. (Elements, by the way, long a fixture on the Top 25, reopened too late for consideration for this year’s list.)

“It’s a whole new can of worms,” jokes Mistral chef de cuisine Ben Nerenhausen, 32. “Increasing seating capacity that much brings all new challenges, but we’re finally hitting our stride.” That’s an understatement. Mistral now has four menus: dinner, lunch, brunch and bar. Each is loaded with oohs and aahs, meaning things you really want to try. They range from bar bites such as chickpea fritters with romesco sauce and Yorkshire pudding with bone marrow gravy to dinner entrées like lamb breast navarin with ricotta gnudi and roasted cabbage with sauerkraut cream and guanciale.

Jamie Dodge, bar manager of Elements, now fills those shoes at Mistral as well, creating gotta-try cocktails and enticing alcohol-free ones. Though the Mistral Bar has its own room, basically any drink or menu item can be ordered there or in the original restaurant. The drinks and food at Mistral live up to Nerenhausen’s avowed goal: “exciting flavors, things that are a little different, a little thought-provoking, and fun.” 66 Witherspoon Street, 609-688-8808. 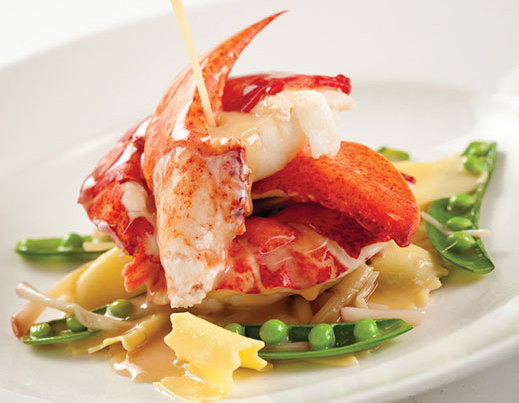 “Sometimes you want to go to a rock concert,” says Nicholas Harary. “Sometimes you want to go to a symphony. Neither should go away.” Executive chef Harary and his wife, Melissa—the hostess, taste arbiter, general manager and co-owner—are in their 16th year of providing diners with a symphonic experience, in the dining room and on the plate. He says 2015 looks like it will exceed 2014, which exceeded 2013, as the restaurant’s best and busiest year.

The symphony is not atonal. Formality, a dirty word these days, is interpreted as pampering, without pretense or stuffiness. The dining rooms are elegantly beautiful, hot dishes come to the table under silver cloches, soup bowls are filled at the table. Harary and his new chef de cuisine, Michael Metzner, are totally in tune with each other. They love vivid flavors, but, in Harary’s words, are “anti-molecular, anti-micro-greens. We’re cooking for the customers. I think people are going back to primary cuts, where they’d much rather have rack of lamb than lamb belly. I think portion sizes are getting a bit larger. I do see more people in their 40s and 50s than people in their 20s. But, you know what? The millenials will be having anniversaries and milestones, too. I enjoy gastropubs, but I’m saying you may not want that on your 25th anniversary.” 160 Route 35 South, 732-345-9977.