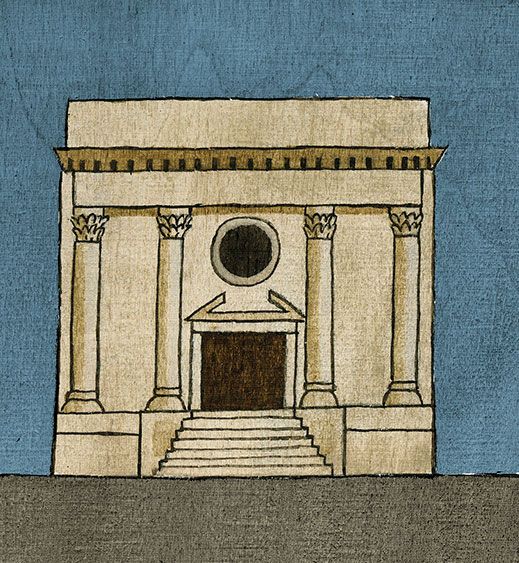 Newark’s oldest continuously operating synagogue, Ahavas Sholom opened in 1923, its congregation having begun forming as early as 1905. In those days, Newark’s Jewish community was thriving. Today, the city’s Jewish population has dwindled to a relative handful, but weekly and holiday services continue for the small egalitarian Conservative congregation, whose 80 families include a few descendants of Holocaust survivors.

On this night, 20 members of the congregation chant Hebrew prayers before the synagogue’s massive ark. A masterpiece of intricately carved mahogany with Gothic arches, it was made in the 1870s for a synagogue in Manhattan that later closed. “It’s the oldest ark in the state of New Jersey and one of the oldest in the United States,” says Robert Steinbaum, an Ahavas Sholom vice president.

During this night’s service, Newark gains a new Jew: Tim Lee, a retired journalist and African-American, who has concluded two years of conversion classes. He reads from the Torah for the first time. As he concludes, the congregation responds with an exuberant, “Mazel tov!”

“This is like his bar mitzvah,” says Rabbi Simon Rosenbach. “We don’t usually shout like that after a reading, but this was really special.”

IF YOU GO: Shabbat services start at 9:30 am every Saturday, followed by lunch for all in the downstairs social hall. Check the website for exhibitions at the upstairs museum. The Ahmadiyya Muslim Community was established in the United States in 1920 and has 73 chapters nationwide. New Jersey has three AMC mosques, one each in the northern, central and southern parts of the state. The 400-member southern, Al-Nasr, congregated in an old farmhouse from 1984 until it opened in 2006. Flat-roofed, it is made of white-painted stone. A series of unadorned arches relieve the strong horizontal lines and draw the eye to the twin entrances, one for men and one for women (wide enough to accommodate strollers).

In keeping with AMC’s belief in women’s equality, the mosque’s prayer halls—again, one for each sex—are equal in size. Every morning, the faithful gather in the mosque on colorful Turkish carpets for the first of five daily prayers. Fridays are when Muslims go to the mosque for Jummah (Friday) prayers—similar to Sunday worship for Christians. AMC endorses separation of religion and state, and advocates for women’s equality and human rights for all religious groups and persecuted minorities. The Willingboro mosque also runs a food bank that feeds about 250 people, provides food supplies and regularly holds public interfaith events on- and off-site to address misconceptions about Islam and to discuss security and true Islam.

IF YOU GO: At Coffee, Cake and True Islam Open House, Thursdays from 7-8 pm, anyone can take part in a frank discussion about Islam. Check their website for exact location and dates. Meet-a-Muslim events are hosted off site in public locations. During Ramadan, the public is invited to Iftar dinners, where the daily fast is broken after sunset. BAPS is a Hindu denomination that encourages humanitarian and charitable endeavors. Its Robbinsville mandir (place of worship) ranks among the world’s largest Hindu temples. On 162 acres of lawns and gardens, the mandir is a multistory, symmetrical wonder of domes, pillars and arches. Made of Italian marble and stone hand carved in Northwest India, the mandir is said to have required 4.7 million man-hours to complete. It opened for worship in August 2014 and continues to expand.

Visitors are surprised to discover that the Mandir is actually two buildings, one inside the other. The protective outer building, or mandap, stands 55 feet tall and 135 feet wide. The even more ornate inner temple is notable for its intricate floor-to-ceiling carvings of orange, green and blue flowers and peacocks. In all, the mandir contains 13,499 carved stone pieces. Incense fills the air.

“When I come here and I see the God, I feel peace, and my daughter does also,” says Jinal Patel, a Robbinsville resident. She and her 2-year-old daughter visit the mandir nearly every day to pray. “Peace like I feel no place else. So, so, so much peace.”
Before leaving the temple, Patel makes a wish and pours holy water over the head and feet of a statue of Swami Narayan, a revered, early-19th-century yogi and the mandir’s namesake. Narayan’s name is contained within the acronym BAPS, which stands for Bochasanwasi Shri Akshar Purushottam Swaminarayan Sanstha.

Don’t be alarmed if you see a swastika in the temple’s brochures. The red swastika was a Hindu symbol long before it was altered and co-opted by the Nazis. “It’s a happy, hopeful, uplifting symbol,” says Mat McDermott, national communications director for the Hindu American Foundation.

IF YOU GO: Visiting hours are roughly 9 am-7:30 pm daily; check the website for specifics. Tour guides are often available, or you can use an audio tour guide.

The National Blue Army Shrine of Our Lady of Fatima This shrine to Mary, constructed in 1978, includes an outdoor sculpture garden and the angular Blessed Sacrament Chapel. Atop the chapel’s 145-foot-tall steeple stands a bronze statue of Mary holding a rosary and wearing a scapular, containing prayers on a string around her neck. The shrine attracts 50,000 pilgrims annually, says David Carollo, local and national executive director of the Blue Army, a national association of the faithful that operates the shrine. The pilgrims, says Carollo, are drawn by Mary’s message of peace.

The shrine commemorates six supernatural appearances of the Blessed Mother before three shepherd children in Fatima, a Portuguese village north of Lisbon, from May to October 1917. Mary’s visitations to Fatima are celebrated annually at the Blue Army shrine with a procession and special events on the 13th of each month, from May to October.

Some pilgrims come simply to attend daily Mass or meditate in the gardens. “There’s special devotion to Mary through meditation and prayer,” says Elizabeth Lockery, a Pennsylvanian who visited the shrine in October with her friend Theresa Herbert of Belvidere. “I always get a huge sense of peace here, which is hard to find these days.”

IF YOU GO: The Rosary is recited at 11:30 am daily in the chapel, followed by a noon Mass. Check the website for special events. The retreat house is available year-round for bookings.