Mila, who has injured feet, is one of the creatures benefiting from the care of Leanne Lauricella
Photo courtesy of Goats of Anarchy

Leanne Lauricella offers apologies for running late, but she’s been out in the pasture, shooing away a couple from California who were begging for a tour of her farm. She had to explain that the farm isn’t open to the public and that a tour would unsettle the animals. “This is really, really weird,” she says.

Weirder is that this hasn’t happened before, given that Lauricella’s Instagram account boasts more than 400,000 followers. Her posts chronicle the lives of the special-needs rescue goats (and their equine, porcine and ovine rescue companions) that populate the Goats of Anarchy farm.

She was a Manhattan event planner when she moved to a 5-acre spread in Oxford in 2011. In 2014, just for fun, she visited a nearby goat farm, which led to the acquisition of two healthy little goats (Jax and Opie, named for characters in the series she was binge-watching, Sons of Anarchy), and eventually, three more. That led to an Instagram account on which Lauricella chronicled their antics. When Instagram featured one of her photos on its home page, she picked up 30,000 new followers, many of whom had goats with congenital abnormalities or who’d lost legs or ears to frostbite. 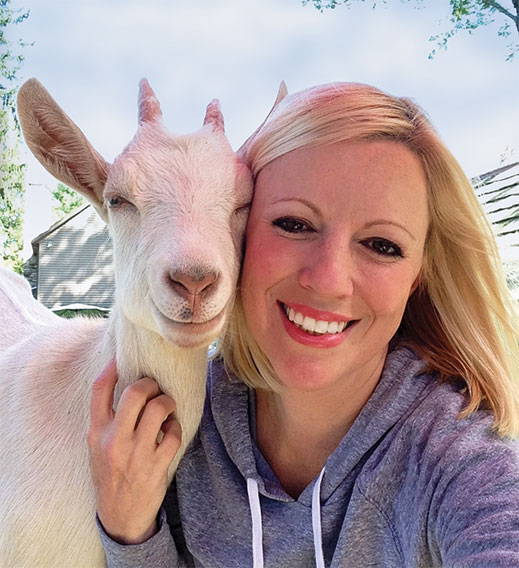 Leanne Lauricella with Petal. Photo courtesy of Goats of Anarchy

She began to rescue them, kindling a new sense of purpose: “to save these goats, along with the countless other helpless animals who need rescue.”

Lauricella jettisoned her corporate life of power lunches and designer stilettos for days of mucking out stalls, vet visits and practical questions like how to keep diapers on hyperactive baby goats (dress them in toddler clothes) or comfort an anxious blind goat (swaddle him in a child’s duck costume). Her new life was marked by breathtaking highs (seeing a congenitally crippled goat walking in prosthetics for the first time) and soul-crushing lows (watching her favorite goat die of a heart attack). But if the latter caused her to consider throwing in the towel, the former kept her in the game.

This year, she marked her commitment with a book, Peace, Love, Goats of Anarchy; a move to a 30-acre farm in Hunterdon County; and the acquisition of 20 new animals, including eight horses and a mini donkey. She’s looking forward to “our favorite day: when those frostbitten goats get their new [prosthetic] feet, and suddenly they walk like everybody else.”