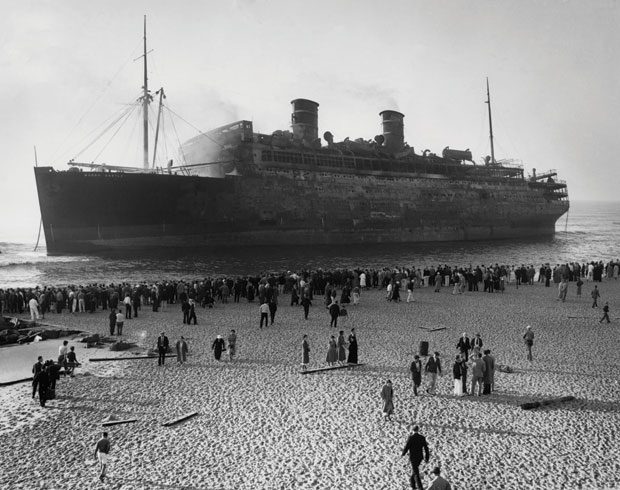 The fire started at 3 am, just hours after the captain of the SS Morro Castle had died on board of a probable heart attack. The cruise ship was plunged into darkness, and passengers struggled to escape. Many jumped overboard, but the rough seas made it difficult to swim. Only six of the ship’s 12 lifeboats were launched.

The date was September 8, 1934. The Morro Castle was on its way back to New York from Havana, Cuba, when, just off Asbury Park, it mysteriously caught fire. Reaction to the disaster was slow. The Coast Guard station failed to send float planes until local radio stations reported that bodies were washing ashore on beaches from Point Pleasant to Spring Lake.

As news spread by telephone and radio, Shore residents assembled on the coastline to nurse the injured and retrieve the dead. The disaster left 137 passengers and crew members dead. The burned-out hull of the ship eventually ran aground near Asbury Park’s Convention Hall. It remained there for several months, becoming a macabre tourist attraction before it was towed away.

The disaster prompted the use of fire-retardant materials on ships, and fire alarms and fire drills were made mandatory.

Remarkably, a shipwreck had occurred 160 years earlier in the same location. In that tragedy, the sailing ship New Era ran aground on November 13, 1854, killing about 250 people, mainly immigrants from Germany. The hull of the ship is believed to be buried in the sand nearby.

The Asbury Park Historical Society will acknowledge both disasters with its annual Morro Castle commemoration at 10 am September 8 near the Morro Castle memorial just south of the Paramount Theatre (In the event of bad weather, check the organization’s website for cancellation information.)

Click here to leave a comment
There are no photos with those IDs or post 85342 does not have any attached images!
Read more Historic Jersey, Jersey Living articles.