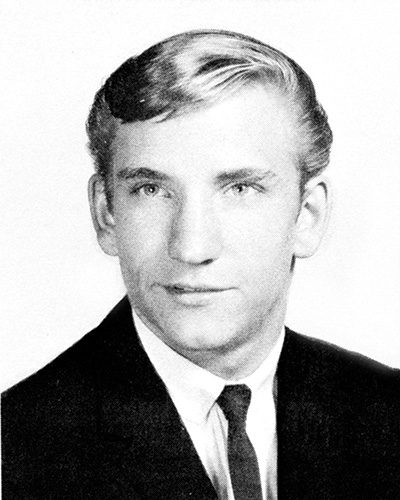 Walsh as he appeared in the Montclair High School yearbook, Class of 1965.
Seth Poppel Yearbook Library.

Joe Walsh’s time in New Jersey was short—only four years—but the rock guitarist, a longtime member of the Eagles, recalls his Garden State stay as “one of my favorite parts of my life.”

Walsh, a native of Ohio, moved to New Jersey at 14. His family lived briefly in New York City, but when Walsh’s parents decided to get their kids out of the teeming Big Apple, they packed up and moved to Montclair.

Now 64, Walsh smiles as he stretches out on a sofa in the Gibson Guitar Showroom in Beverly Hills and recounts his years at Montclair High School. He may be 3,000 miles away and 50 years down the road, but mentally he’s walking along Bloomfield Avenue, where he still likes to stroll when he visits. “That’s where the White Castle was,” he remembers.

The guitarist’s ties to New Jersey remain strong. He returns for high school reunions, and even to play in the high school’s Grid Iron Club golf tournament in June, as well as to visit his brothers, one of whom lives in Clifton, the other in Nutley. He also funds a scholarship at the high school, co-named for him and William McClellan, the former music director.

And, he often returns to New Jersey for work, such as when the Eagles played Newark’s Prudential Center a few years ago. “A whole bunch of our class got together to go, Joe reserved tickets for us,” says Montclair resident Steve Knox, who graduated from high school with Walsh, class of 1965. “We were all ushered into this room where he set up food and drinks for us and a little reception where he came and saw us. He doesn’t put on airs when he gets together with us…He hasn’t forgotten all his friends and his good experiences at Montclair High.”

Not surprisingly, Walsh’s fondest high school memories are musical. He joined the marching band, starting first with clarinet and then oboe, which, as it turns out, had a hidden advantage. “I got to get out of homeroom because the whole orchestra tunes up to an oboe,” he says. “Everybody paid attention to me. I didn’t even know it yet, but that’s part of what I wanted out of music.”

However, as any musician knows, you don’t get the girl by playing oboe. “So I switched to guitar…and what I heard in my head, I could play [on the guitar]. I couldn’t do that with a trombone.”

The teenager who taught himself guitar is best known as the originator of some of rock’s classic riffs, whether it is the down-and-dirty opening to “Funk #49” by his early band, the James Gang (in which he played from 1968 to 1971), or the crunchy, sly work on his solo hits, “Rocky Mountain Way” and “Life’s Been Good.” Most famous is his work with the Eagles on rock standards such as “Life in the Fast Lane,” which he co-wrote.

In June, Walsh released his first solo album in more than 20 years, Analog Man—co-produced with Jeff Lynne—on which Walsh proudly declares himself out of step with these digital times.

“I’m not alone,” Walsh says. “Between the last album that I did and now, I’ve had to make some adjustments. We used to have recording tape and knobs and now we’ve got a mouse. Where’s all the knobs?”

Walsh, who will appear in concert August 7 at the Mayo Performing Arts Center in Morristown, continues: “I have always written about the world as I see it, and there’s this new world now. It’s virtual and it doesn’t really exist except in a computer and all of us are spending a lot of time in there. I don’t know if it’s working for us or we’re working for it, but it’s mutating.”

The new album brims with a confidence that Walsh says he developed only after he became sober in 1994 and learned “about life after vodka; about life as an adult.”

Walsh gained sobriety the same year that the Eagles reunited for their Hell Freezes Over tour after a 14-year hiatus. The band, one of the top-selling recording acts in history, has been flying high since, performing almost every year. Now, when he looks across the stage and sees bandmates Don Henley, Glenn Frey and Timothy B. Schmit, he celebrates the group’s vaunted history.

“We’ve been through about every trip a band can go through and we’ve all done solo work and been successful that way and we’ve all played with fine musicians, but when the four of us get together, it becomes something bigger than any of us individually,” says Walsh, who joined the Eagles in 1975. “We can take time off and stuff, and we can work at other projects, but we miss that.”

Long before he was an Eagle, there were two bands in Walsh’s life. As a senior in high school, he played bass in the Nomads, a cover band that performed throughout the state. “Back then, you didn’t have to be good if you knew Beatles songs. And if you had Beatles boots, you were cool,” he says. “I’m grateful to the Beatles because I got a chance to play in front of people.” (In a rock and roll twist, in 2008, Walsh married Marjorie Bach, whose sister, Barbara, is married to Ringo Starr. That makes the Beatle drummer Walsh’s brother-in-law.)

During his Montclair years, when Walsh wasn’t making music he would venture into Manhattan to get closer to the source. “I was not old enough to get in, but I would go to the Village and stand out front [of the Bitter End] and listen to the Lovin’ Spoonful,” he says. “I’d go stand in front of the Peppermint Lounge and listen to Joey Dee and the Starliters. I would go to Manny’s Music Store and I would look at all the guitars and all the amps and dream. Didn’t have money to buy ’em. And then I would take the last bus back out to Montclair.”

It was an idyllic time, Walsh says, just before the turbulence of the ’60s erupted.

“There were lots of Italians, there were black people, there were Jewish people, we all got along great. The only fights were us against another high school because they were messing with our cheerleaders at a football game and we were state champs,” says Walsh, who played tight end for one season before he was injured. After the games, the students and football players used to gather at Bond’s Ice Cream on Valley Road in Upper Montclair. “[The players would] come and hang out and then they’d go to a party,” Knox recalls.

Looking back, Walsh—who returned to Ohio after high school graduation to attend Kent State (where he joined the James Gang)—recalls his time in New Jersey as crucial to his maturation. The lessons he learned have served him well. “It was an age of innocence and I’m so grateful for that experience because it was a foundation for me getting along with people. There were no drugs…If they had drugs, I’d still be in high school,” he says with a laugh. “When I was most impressionable, when I was trying to find out who I was, I had no terrible temptations and no bad experiences and I loved New Jersey for that.”