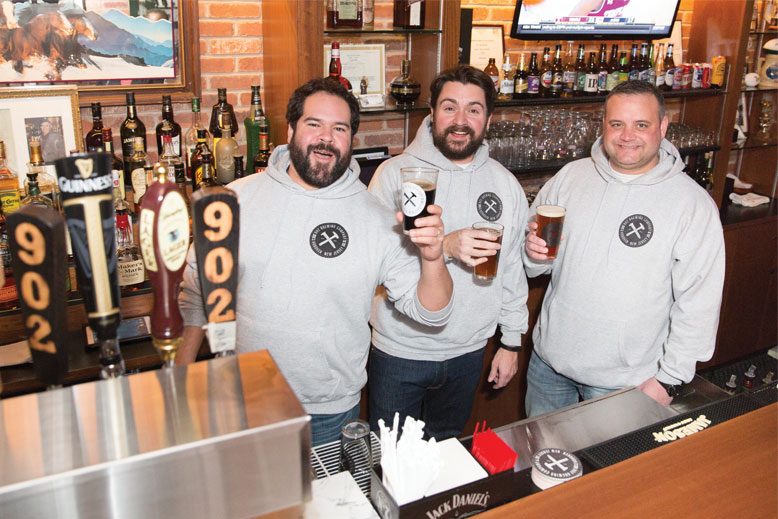 By some accounts, Hoboken was home to America’s first brewery in 1641. Some 374 years later, three Jersey guys are trying to bring brewing back to the Mile Square City.

Colby Janisch and Tucker Littleton, both 31, planted the seeds for 902 Brewing Co. in 2012 in their apartment at 902 Washington Street, Hoboken’s main drag. It began with a Mr. Beer Kit and wistful talks over home-brewed pints, then bubbled into a reality as fellow craft-beer lover and friend Andrew Brown, 34, joined the team.

The trio developed a business plan, built their own equipment, raised more than $36,000 in a KickStarter campaign, and last fall, after nearly a year of paperwork, secured a distribution license from the state.

Since then, 902 Brewing has been distributing kegs of its brew to more than 30 locations around New Jersey, including five in Hoboken and Jersey City with dedicated lines—meaning 902 is always on tap. The 902 lineup comprises a stout, a pale ale named PATH (Pale Ale True Hoboken), and two IPAs—Heaven, Hell or Hoboken (based on General Pershing’s World War I rallying cry) and Black Dynomite.

“We’re focusing mostly on Hudson County as a launch,” says Brown, president of sales and marketing. “But we want to incorporate the history of New Jersey as a whole and branch out from there.”

No longer residents of 902 Washington, the partners rent a storage warehouse in neighboring Union City. Brewing is done under contract at Climax Brewing Company in Roselle Park. Brown says they hope to be bottling their creations by June. The larger goal is to open a brewery of their own, preferably in Hoboken.

“We really want to have a tap room in Hoboken,” says Brown. “But if someone came to us with a great space elsewhere, we would entertain that offer.”

The new business is one of more than 40 breweries and brewpubs in the state, with 30-plus others starting up—including another in the Mile Square, the Hoboken Brewing Company, which hopes to secure its license soon.