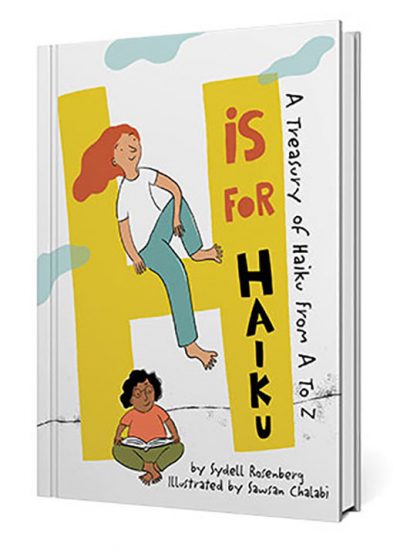 It took decades, and a slow path through grief, for Amy Losak to fulfill a promise made at her mother’s funeral in 1996. The Teaneck resident sifted through the papers her mother, poet and New York City school teacher Sydell Rosenberg, left when she died suddenly at the age of 66. More than 20 years later, Losak holds her mother’s book, H is for Haiku: A Treasury of Haiku from A to Z, with a sense of quiet accomplishment.

“My mother’s dream became my dream,” Losak says, noting that she has begun writing haiku herself, inheriting her mother’s delight in making small moments big.

The volume, published by Penny Candy Books and whimsically illustrated by Sawsan Chalabi, collects 26 haiku related to city living in an alphabet book for children, with charm enough for adults.

Munching on acorns/a squirrel sweeps up sunbeams/with her transparent tail.

Rosenberg, a charter member of the Haiku Society of America, defined haiku in a 12-line poem at the beginning of the book. It reads in part: That fledgling moment, when/the wingstrokes become sure—when the/bird has staying power in the air.

Losak, a public-relations professional, says her new love of writing haiku would likely surprise her mother. “The process of slowing down and observing aspects of my daily life, with all my senses,” Losak says, “is its own reward.”