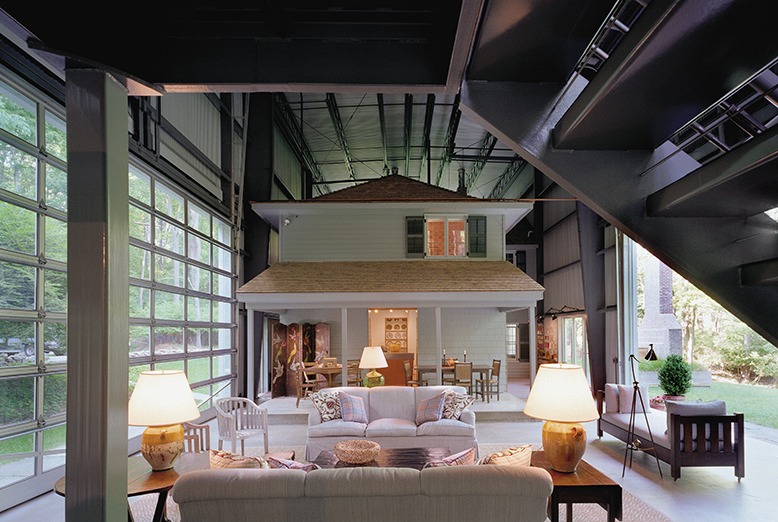 For his Bunny Lane home, Kalkin put a two-story cottage inside a prefab airplane hangar. Courtesy of Peter Aaron/Otto

Follow the wooded driveway to its end, and you arrive at an anomaly: In a grassy clearing ringed by tall oaks, an immense, silver box catches and amplifies the late-morning sun. Walk around the box, and a windowed wall offers you a voyeur’s view of rooms atop rooms and the furnishings that fill them: a desk, a divan, a standing lamp, a toilet. What’s most striking about the house—because it’s clear that this gleaming rectangle is a structure in which people live—is how comfortably it fits in to its wooded surroundings, heightening one’s awareness of leaves, bark and branches.

Welcome to Bunny Lane, the Bernardsville house architect Adam Kalkin built in 2000 for his family by enclosing a tiny, 19th-century, shingled cottage in a 100- by 33-foot prefab aircraft hangar.

Kalkin, who grew up not far from here, liked the property for its proximity to his parents, its privacy, and the intriguing bit of history the cottage represented.

While the less imaginative among us might simply have expanded the cottage, Kalkin figured an aircraft hangar would afford not just more room, but also, he says, “a voluminous space that you don’t normally get in a house, and verticality that you can play with.”

Kalkin may well have meant that last bit literally. Inside the house, a climbing rope hangs from the 30-foot ceiling, descending almost to the cement floor, which on this day is cluttered with toys. (Kalkin and his wife share the house with their four children, ages 2–20.)

Each of the nine rooms has two glass walls, one looking out at the woods, the other at the soaring interior space that surrounds the cottage. The resulting house is an interweaving of styles, each evoking a specific emotional response. Walking from that soaring great room into the diminutive cottage library, with its fireplace and book-lined walls, and then out into Kalkin’s long, broad-windowed office, is an invigorating, if dizzying, experience.

Bunny Lane—so dubbed by Kalkin’s daughter for the rabbits that regularly crisscross the drive—was the first home Kalkin built using large-scale industrial materials; in fact, he’s famous for his work with shipping containers—large, corrugated-steel boxes used to transport an array of goods around the world. Long intrigued by what he calls “the offcuts of the world, the things that are left over, the junk, the detritus,” Kalkin first noticed the containers as he drove from New York City to Bernardsville, along industrial sections of the New Jersey Turnpike.

The boxes fired Kalkin’s imagination. He had yet to study architecture, but he began to incorporate containers into sculpture and art installations. After becoming an architect, he started building with the boxes, earning the sobriquet, “father of cargotecture.”

As architecture, shipping containers may not yet be ubiquitous, but thanks to Kalkin’s inspiration two decades earlier, they’re increasingly a part of the American landscape. In New Jersey, a shipping-container hotel is rising in Atlantic City, and for several years, a grouping of artists’ studios, known as artBOX, has been housed in containers at Morey’s Adventure Pier in Wildwood. Last year, containers were used in Woodbridge for a series of mobile medical-care units to be deployed where needed in response to the Covid-19 pandemic. In Long Branch, an entrepreneur is raising mushrooms in a shipping container.

Most proponents are drawn to the containers for their affordability—many container homes cost half as much per square foot as traditional houses—and their sustainability, as well as the relative ease with which they can be used in construction.

Kalkin, on the other hand, was moved by containers on a more metaphorical level. “I was always interested,” he says, “in the poetry of them, these things on ships that carry strange cargo, that travel all over the world, and yet they’re the same—modular items that repeat hundreds of thousands of times.”

The observation is consistent with his background in the humanities and a creative propensity that was kindled in his teens, when he realized, he says, “that art could be more than drawing a picture.” He was introduced to architecture around the same time; his father invited him to sit in on a business meeting, and although Kalkin wasn’t particularly intrigued by the structure his father was hoping to build, the process grabbed him. “I liked the kind of problem solving architecture represented,” he recalls.

For Kalkin, making buildings flowed naturally out of making sculptures and other art. In fact, he compares himself and his process not to other architects, but to the French artist and iconoclast Marcel Duchamp. “There’s a little bit of absurdity to Duchamp’s work,” Kalkin says. “He was picking things out of the environment”—Duchamp’s sculptures often incorporate, or consist entirely of, castoffs, from a bicycle wheel to a bidet—“and he was influenced by things that were outside the traditional territory of art.”

Like Duchamp’s paintings, Kalkin’s work is informed by his other passions, including music. In fact, there’s something symphonic about the architectural flow he creates, which can be sweeping for long stretches, then turn suddenly staccato.

Before he studied architecture (at England’s Architectural Association School of Architecture), Kalkin studied philosophy and English at Vassar College, graduating in 1990. His personal philosophy, he says, is manifest in his buildings, in the materials he chooses, and in what he calls “the poetics of the space.”

What’s most consistent about Kalkin’s buildings is their unorthodoxy. Similar to Bunny Lane, Adriance House—Kalkin’s 2003 project in northern Maine—uses stacked shipping containers inside a large exterior structure, this one made almost entirely of glass. To celebrate, rather than disguise, the containers, Kalkin retained their original exterior color, a vivid orange. Adam Kalkin and his dog, Curly, visit a residence in Califon that Kalkin created by stacking six cargo containers and adding lots of glass. Courtesy of Peter Aaron/Otto

Kalkin’s container house in Califon, Hunterdon County, is equally outside the box, featuring two separate wings originally connected by an orange steel breezeway above a bluestone patio. Several years ago, the owners installed an enclosed, temperature-controlled corridor between the wings, yielding to a more practical consideration.

Temperature control represents something of a challenge in container homes, but not an insurmountable one. “You have a metal box that you’re trying to make comfortable for dwelling,” notes Julio Garcia Figueroa, a lecturer at NJIT’s Hillier College of Architecture & Design and principal designer of the M2CU, a mobile medical-care unit repurposed from a shipping container. “You have to build up the walls in order to get the right resistance to heat moving through them, which means you have to increase the thickness of the walls without compromising space.”

Kalkin says he’s managed to do that, though he won’t reveal his methods. “Over the years,” he says. “I’ve figured out a way that I like to make that stuff work.”

Kalkin’s philosophy of architecture, as well as his sense of fun, is evident in the name of his firm, Industrial Zombie (IZ), founded in 2010 with his high school friend Matthew Quilty.

The company website offers this explanation of the name: “Much like those supernatural forces that awaken new life in dead bodies, we use discarded industrial materials, reimagining them for a higher purpose, thereby giving them new life.”

Not all of IZ’s structures are dwellings. The company’s push-button houses, often used for event marketing, are repurposed shipping containers that open up hydraulically to reveal a hidden interior. For Illy, the Italian coffee company, IZ created an art café. Push a button, and a rusting container opens into a quirky instant coffeehouse. In another push-button application, a mobile kitchen commissioned by Whole Foods transforms from container to fully functional restaurant in 60 seconds.

While Kalkin continues to work on large dwellings—for the past three years he’s been building a house, commissioned by a sheikh, in the Persian Gulf—the pandemic has taken him in a new direction. He’s lately been designing a series of fabric structures—he describes them as “cool kinds of tent things”—that can be installed in a backyard to create a work-from-home office, playroom or entertaining space.

“They’re somewhere between permanent and very temporary architecture,” he says. You could also say that about the seesaw playhouses, levered across a tall tree trunk, that Kalkin built for his kids. (Yes, he also designs playgrounds.)

The playhouses and tents are emblematic of a mind that can veer in a nanosecond from whimsy to zeal and seems as taken with the temporary as the permanent. And yet, as much as Kalkin is drawn to the world’s detritus, he very much wants his work to endure.

Keenly aware that the lifespan of a building can be relatively short, Kalkin aims, he says, “to create a dialog between perpetual nowness and the perpetually receding past.” Two decades into his architectural career, he assesses his own ability to do that: “The buildings are interesting to me and to other people, and they’ve got a kind of grit,” he says. “I think they age well.”

Longtime correspondent Leslie Garisto Pfaff has passed shipping containers on the New Jersey Turnpike for years. She’s never wanted to live in one.