Charlie and his adoptive mother Anne. Courtesy of CASA

Around mid-morning on April 14, a procession of cars, including state troopers and firefighters, looped through the horseshoe-shaped driveway outside Anne Beccica’s South Jersey home. They honked and cheered as a little boy watched from the safety of his doorway. His aunt wore a dinosaur suit; a teacher from his school waved as she drove past. 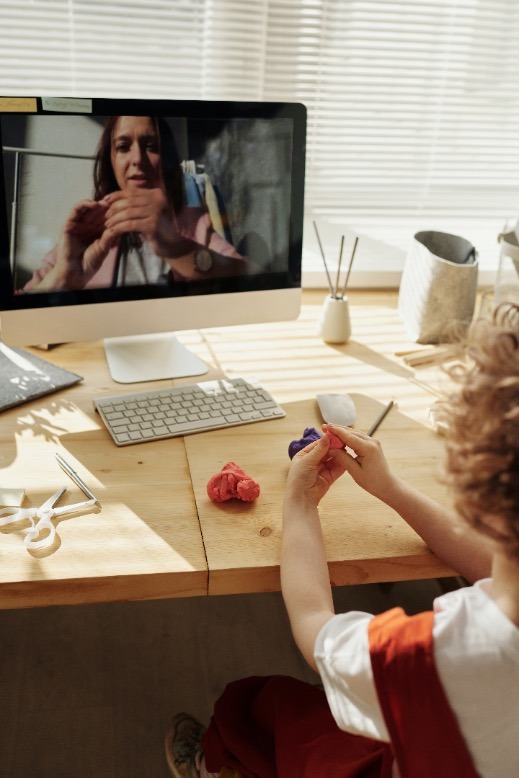 A CASA volunteer on a Zoom video call with a foster kid. Courtesy of CASA

The celebration was unusual, even for the Covid-19 lockdown. It was adoption day for 7-year-old Charlie. His adoption was finalized that morning via a Zoom video conference with a judge. Among the participants: Charlie, his adoptive mother Anne, and Steve Betchner, a volunteer with Court Appointed Special Advocates (CASA).

The oldest and the youngest in society are often our most vulnerable populations; the current pandemic only makes their situations more perilous. For that reason alone, Charlie’s virtual adoption was a special moment for CASA, the national nonprofit that advocates and finds permanent homes for children who are wards of the state. Since the start of the pandemic, there have been 15 virtual adoptions for CASA kids across New Jersey, with eight more scheduled in the next month or so, according to a CASA official.

“Eyes on the child” is CASA’s directive for its volunteers. “One of the standards for this is that every volunteer assigned to a child visit at least once a month in their home environment and lay eyes on them,” says Liza Kirschenbaum, associate director of CASA of New Jersey. Covid-19 made those visits impossible.

Charlie came into foster care in January 2017 after being removed from his parental home for reasons of substance abuse and domestic violence. That March, Betchner was assigned as Charlie’s advocate. Since then, he has been making bi-weekly visits with his “little buddy” and advocating to find Charlie a permanent home. All the paperwork was in place for Charlie’s adoption when Governor Phil Murphy issued his stay-at-home edict. The adoption seemed to be in jeopardy.

“The courts stepped in to drive it forward,” says Angie Waters, director of CASA of Atlantic and Cape May Counties. “Without such a great collaborative working relationship—between attorneys, court staff and volunteers—there’s no way a virtual adoption could happen so quickly after a shutdown.”

In March, CASA of New Jersey informed its 2,000-odd volunteers that they would have to use remote methods to check in with the children assigned to them.

“It’s been amazing,” says Waters of the volunteers’ response. Some were not comfortable with video-conferencing technologies; others had limited digital access. Despite these constraints, they found creative solutions, revealing the deep commitment to children’s safety and well-being that attracts volunteers to CASA.

[RELATED: New Jerseyans Are Battling Covid-19 with Acts of Kindness]

Engaging young children during a video call can be a challenge. One volunteer has had success hosting virtual tea times with the siblings assigned to her, ages 5 and 7. Another volunteer assigned to a 7-year-old girl mailed the foster mother a package containing nail polish, a chocolate bunny, animal crackers and other items. The package included instructions on where the mother should hide the items, and clues for the child. The result was a scavenger hunt that the child loved.

“The kids are now getting to know our volunteers a little better and creating lasting relationships,” says Waters. “There’s a real validity to this approach.”

Texting has long been a mode of contact for teenagers in the CASA program. With the lockdown, volunteers are in touch almost daily, helping older children deal with the loss of freedom that comes from sheltering indoors in their foster homes.

In the weeks between the start of the lockdown and Charlie’s adoption day, Betchner, too, had to devise ways to keep things interesting. He started by letting Charlie peek at his bedroom on FaceTime calls. “Your bedroom’s not as cool as mine,” was Charlie’s response, “because you don’t have stars on your ceiling.”

In the meantime, CASA and its volunteers will continue to adapt and change—and celebrate little victories with children like Charlie.

Mary Ann Koruth is a writer and UX designer based in central Jersey.