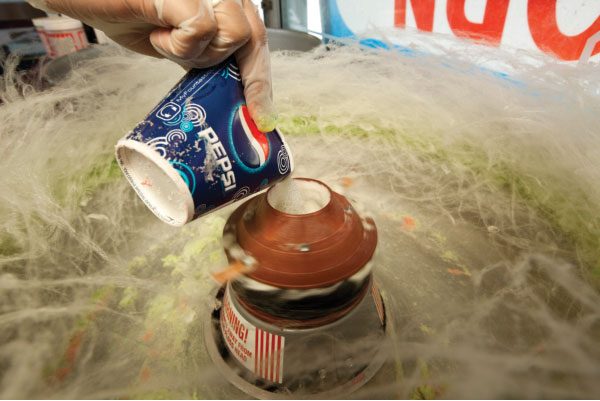 The inventors, William Morrison and John Wharton, sold 68,655 boxes of the novel confection at the 1904 World’s Fair. The French call the stuff barbe à papa (grandfather’s beard). We know it as cotton candy, a name adopted in the 1920s. Credit for creating the fluff, however, may go to the Italians, who as early as the 1400s melted sugar in a pan, teased it into long strings with a fork, and draped the strings over bowls to cool.

Cotton candy is a simple product. The only ingredients are sugar and air—mostly the latter. “That’s a lot of air you’re buying,” says Tom Petre, northeast regional sales manager of Gold Medal Products Company in Cincinnati, a leading maker of cotton-candy machines. The good news is, parents needn’t worry about kids ruining their teeth. A cone or bag of cotton candy contains only about 1 teaspoon of sugar, compared to 18 to 22 teaspoons in a 12-ounce can of soda.

2. MELT, FLING
The spinner head looks like a bowl whirling on a potter’s wheel. Inside the head, the sugar trickles down into the heating element, a metal coil operating at about 300 degrees, sufficient to melt the sugar. Spinning at 3,450 rpm, the head flings the liquid sugar outward by centrifugal force.

3. FLOSS SLITS
Surrounding the heating element is a black steel ring called the floss band. Two rows of diagonal slits in the band disperse the liquid sugar into thin filaments known as floss.

4. COOL CANDY
The sugar filaments cool almost at once, into gauzy strings. A plastic net called a stabilizer, which lines the inside of the floss pan, gives the cooling strands a foothold. The candy then forms from the pan surface back to the spinner head. A savvy operator gathers the floss off the sides of the pan, not near the head, which would produce a harder, heavier candy.