Since its opening in 2014, Amazon’s 1.2 million-square-foot warehouse in Robbinsville has attracted a steady stream of tourists, some lining up 30 deep to get inside. Those who haven’t signed up in advance for the free one-hour visits, held the first and third Tuesday of each month, are out of luck until a weeks-long waiting list opens up.

The draw (“come see the magic that happens after you click buy on Amazon,” as the sign-up website has it) may seem tepid. But the several thousand who have managed to see what it takes for Amazon customers to get their toy Batmobiles and fish-oil supplements know the warehouse is a marvel. By visiting the great, gray building just off I-195, on what was South Jersey scrubland five years ago, they’re peeking into the future—not just of retail, but of labor at one of the biggest and most ambitious companies in New Jersey.

Amazon is tied for fifth on the state’s latest official list of largest employers. At last count, according to Rachael Lighty, a company spokeswoman, it was employing a combined 17,000 full-time workers in eight shopping mall-sized New Jersey warehouses, which Amazon prefers to call fulfillment centers.

[Update: After this story was filed for New Jersey Monthly’s November edition, Amazon announced it would split its second headquarters into two locations, New York City and Arlington, Virginia. Each location will bring 25,000 jobs to their respective areas. Newark was one of the finalists under consideration.]

New Jersey is more snuggled with Amazon than are its neighboring states. Five years ago, Jersey had a single fulfillment center. In late September, Amazon opened a ninth—with more than 1,000 full-time jobs—in West Deptford, in Gloucester County. A Burlington center is scheduled to open in 2019. New York has one fulfillment center. Pennsylvania has eight.

In addition, Amazon has sortation centers in Teterboro, Logan Township and Avenel. Sortation center? That’s where packages assembled at the fulfillment centers are sorted by zip code and sent out for delivery. A fourth sortation center is scheduled to open in Robbinsville next year. That will bring the total number of facilities to 14.
Amazon’s predilection for New Jersey makes sense. Each fulfillment center here is yoked to the New Jersey Turnpike. Locations range from Logan Township in South Jersey to Teterboro in the north, making for easy access to the state’s 9 million residents and the 40 percent of the country’s population that lives within a 24-hour drive of the Garden State. 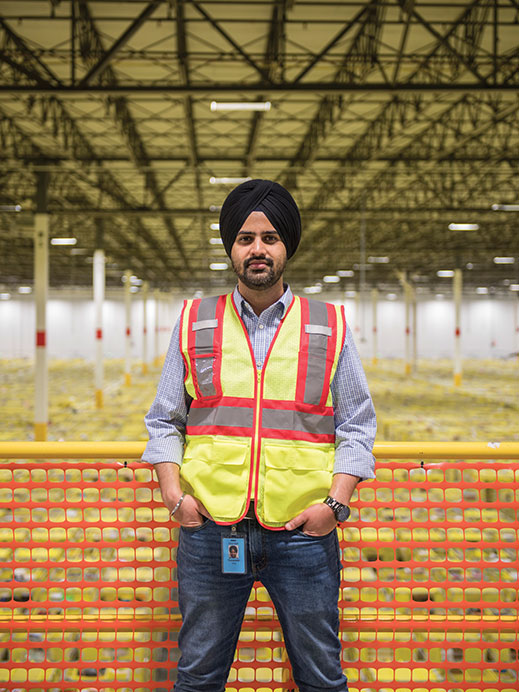 “From the moment you click we’re trying to beat the clock.”—Preet Virdi, director of operations Photo by Alex Fradkin

Easy access means better efficiency, speed and productivity, three of the elements that have made the 24-year-old company ubiquitous and its founder, Jeff Bezos, reportedly the richest man in the world.

The method that leads to the merriment of clicking a button and having a gas grill or a two-person kayak arrive at your front door within hours seems, in that light, worth waiting in line to observe.

“It all starts with the customer,” says Preet Virdi, director of operations at a 1.1 million-square-foot fulfillment center in Carteret. “From the moment you click,” he continues, “we’re trying to beat the clock.” Virdi is leading this reporter on a private tour of the noisy center, open since 2016.

High heels are forbidden here. A painted line serves as a boundary so visitors don’t get too close to the 10 miles of conveyor belts weaving through the cavernous space.

The energy of the bare-bones building radiates from the middle of each of two floors, where workers in orange safety vests stand in open-air vestibules reading from computer screens or clipboards. Behind them, acres of merchandise are tucked away in thousands of yellow pods, each about 7 feet tall and 3 feet wide. Squat, 300-pound, orange robots with wheels shuttle the pods from floor to pickers—humans who assemble the orders. The robots spare the pickers having to walk up to a quarter mile to fetch the items themselves. They’re also much faster than humans.

Carteret has hundreds of workstations and robots and more than 2,000 full-time employees, whose jobs range from picker to manager to robot fixer, aka Amazon Robotics Tech. Drones have not yet landed in Carteret or any other New Jersey fulfillment center, but the techies in Boston, where Amazon Robotics is headquartered, are working on it.

“Say you order something on Amazon Prime, and it’s supposed to get to you on Friday,” Virdi says. “That order is in our master system within two minutes. The system knows what inventory is where, and it tells us quickly if it’s an order we’re fulfilling here, from this facility. From that moment on, we’re rushing to get you your order by Friday.”

Delays happen, as most people who regularly use their $119 annual fee Prime account know. But despite overseeing the shipment of more than 1 million boxes a week, Virdi says, “we have a pretty good accuracy rate.” If a blizzard or some other emergency shuts down operations in Carteret, the master system knows to send the order to another fulfillment center in a kinder climate. It costs Amazon more, but keeps the customer happy. And that is part of a larger push among top brass to keep everyone the retail titan comes in contact with happy.

Though at times it has seemed otherwise, Amazon cares a lot about its reputation. “Amazon is hugely focused on safety, quality and employee engagement,” says Virdi. That’s MBA-speak for trying to be a thoughtful corporate citizen.

For instance: Benefits extended to Amazon workers in New Jersey include 20 weeks of paid maternity and family leave; 95 percent pre-paid tuition for employees who go back to school in high-demand fields, even when their new skills are not relevant to jobs at Amazon (nursing, for example). The starting wage for pickers, who typically work 10-hour days, four days a week, is about $15 an hour, plus benefits.

“We always hear that the benefits are one of the best things about working for Amazon,” Lighty says. Job fairs held occasionally in fulfillment centers draw so many applicants that lines snake around buildings. Some of those hired will earn commercial drivers’ licenses and other professional certifications on Amazon’s dime through a partnership program, Career Choice, that brings in educators so workers don’t have to travel for vocational classes. To date, more than 700 New Jersey employees have enrolled in Career Choice classes. Completing them could be especially important here, as business leaders try to improve workforce development to stem the tide of millennials fleeing the high cost of living in New Jersey.

In addition to taking care of its employees, Amazon is aiming a sliver of its largesse at small businesses that have survived Amazon’s dominance. Lighty says more than 66,000 small to medium businesses in New Jersey have been growing their incomes with the help of the company’s Fulfillment by Amazon option, which allows the little guy to use the behemoth’s website, logistical expertise and shipping channels. That includes the many New Jersey artisans—almost 1,000, according to Lighty—whose handcrafted goods are available through Handmade by Amazon, the company’s answer to Etsy. A picker sticks to her workstation at the Carteret fulfillment center while a robot roams the aisles grabbing the pods needed to fulfill yet another Amazon order. Photo by Alex Fradkin

Benefitting from the initiative to give back are around 26,000 organizations in New Jersey that qualify to receive funds through AmazonSmile, the Amazon-identical website at smile.amazon.com that donates a half percent of the price of eligible products to charities. Signing up for Smile, customers choose the charity they want to support. Lighty also notes at least one ecological good deed: Jersey’s largest solar-panel roof is on the Carteret fulfillment center. It comprises 22,000 solar panels covering 30 acres.

Amazon may be best equipped to boost its image locally by boosting the economic health of New Jersey towns. Lighty says the company has generated 9,000 indirect jobs in addition to its direct hires, especially in construction and consulting. A 2017 report on Amazon’s growing Jersey footprint by the Wall Street credit-rating agency Moody’s Investors Service, concluded that towns with fulfillment centers see benefits, including a boost in property tax revenues.

The push for high-profile corporate responsibility is an attempt to reverse the company’s reputation as the business world’s version of a soap-opera home-wrecker. Along with being scorned for breaking up relationships between mom-and-pop shops and their traditional customers, Amazon is taken to task for its stalker-ish privacy breaches, including a well-publicized one in May involving Alexa, its at-home virtual assistant.

Other troubles are brewing. In New Jersey, politicians are debating the wisdom of offering $7 billion in state and local tax incentives to bring the second headquarters to Newark—although number crunchers estimate it could bring New Jersey up to $9 billion in benefits over an unspecified time period.

In the wider world, labor leaders have criticized the company’s opposition through the years to workers’ efforts to unionize. And reports alleging the exploitation of employees have surfaced in a handful of cities outside of New Jersey. In his book Hired: Six Months Undercover in Low-Wage Britain (Atlantic Books, June 2018), author James Bloodworth writes about an Amazon fulfillment center whose British employees are under so much pressure to keep productivity high that they urinate in bottles at their workstations rather than take bathroom breaks.

A scan of the Internet job-rating site Glassdoor turns up similar tales of worker disaffection in New Jersey. One former Robbinsville fulfillment associate writes “They work you to death,” and a current employee says, “They work you way too hard, cracking the whip on time off task/productivity.” But the site’s 90 reviews of Amazon’s Robbinsville fulfillment center are mostly positive, earning it more than three stars on a scale of five.

That jibes with the experience in Carteret of Steve Migliore of Edison, a picker who was dispatching robots to collect outlet covers, phone chargers, Halloween costumes and other items during this reporter’s visit.

Migliore, on the job 2 1/2 years, was easily able to talk about his tasks while performing them, suggesting that the novelty of contact with millions of random products each day wears off and the work becomes not especially stimulating or challenging. He didn’t seem to mind.

“The benefits are great,” he says. “And I get to work with robots all day. It’s awesome.”