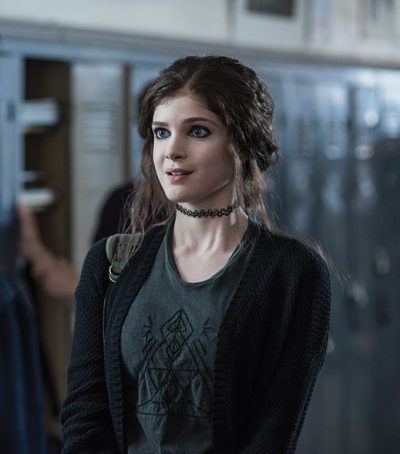 Elena Kampouris as the sulky Paris in "My Big Fat Greek Wedding 2." The Bridgewater native "grew uo" on the original.
Photo courtesy of George Kraychyk/Universal Studios.

Working alongside Nia Vardalos and John Corbett in the film My Big Fat Greek Wedding 2 has been the biggest thrill in the seven-year acting career of Bridgewater Township’s Elena Kampouris. But the 18-year-old also likes normal teen stuff—like the day in March when she went to the Reading Cinemas in Manville with her high school friends. The feature: My Big Fat Greek Wedding 2.

Landing the part of Paris, the sulky teenage daughter in My Big Fat Greek Wedding 2, was about as good as it gets for Kampouris and her Greek family. “When my parents found out, they freaked,” she recalls.

“Greeks are fiercely proud,” she says. “The original came out in 2002; I grew up watching it. I’ve seen it hundreds of times.”

Kampouris also has played memorable characters in the films Labor Day, with Kate Winslet; Men, Women & Children, with Jennifer Garner; and The Cobbler, with Adam Sandler. Last year she starred in NBC’s short-lived thriller, American Odyssey. She recently finished shooting the dark drama Before I Fall, based on the 2010 young adult novel by Lauren Oliver.

Her success at casting calls hasn’t made Kampouris want to wave goodbye to her hometown anytime soon. “I get incredibly homesick when I leave. I have no desire right now to be in Hollywood,” she says, acknowledging that her career may eventually lead her there.

Kampouris recently attended her senior prom at Gill St. Bernard’s School in Gladstone even though she didn’t graduate with the class of 2016—she has had a private tutor since last year—and she still finds time to hang out at the Bridgewater Mall.

She even has a regular-kid part-time job, sort of.

Kampouris’s father owns Select Vintage Wine in Basking Ridge. Her mother helps out at the shop. So does her 21-year-old brother, and so does she, when available.

“I was born into a Greek family,” she says, “and it was instilled in me not only to be passionate about the culture, but also to be freaky loyal.”