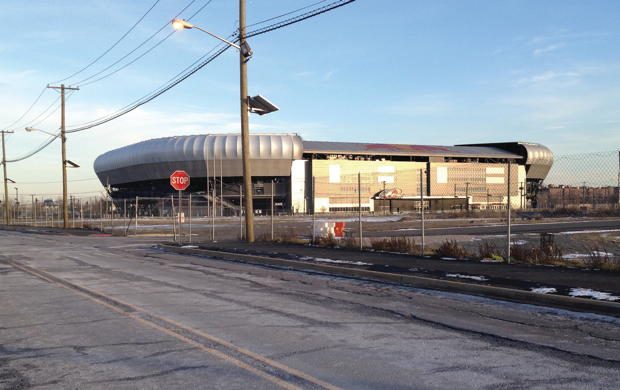 Isolated: Red Bulls Arena, built on land that Harrison spent $40 million to acquire, has not spurred contiguous development. The renovated PATH station nearby has proven the more powerful magnet.
Photo by Ken Schlager

On game days, the streets around Red Bull Arena in Harrison are packed with soccer fans in red-and-blue jerseys. They pour out of the town’s PATH station and into the surrounding blocks, queuing up 20 deep at Five Guys, the burger joint in one of the new residential buildings near the station. With the Red Bulls coming off two successful seasons in one of the nation’s fastest-growing spectator sports, the team and the town appear to be locked in a mutual embrace that should thrive for years.

But then there are the 340 or so days each year when there are no games. On such days, the arena is an empty, silvery-gray presence looming over an urban wasteland of gravel lots and barren sidewalks.

Five years after Harrison, a working-class town of 14,000, spent $40 million to acquire land for the arena, it is unclear whether the town’s bet on pro sports was a masterstroke or a massive misstep. The development that Harrison’s investment was supposed to spark has mostly stalled on the blocks closest to the facility. The stadium itself and its namesake team are at a crossroads. The Red Bulls’ most marketable star retired last fall and a new rival team starts play at Yankee Stadium in the Bronx this spring. The glory days of Harrison and the Red Bulls could be over before they’ve begun.

Founded in 1996 as the Metrostars, New Jersey’s Major League Soccer franchise was reborn in 2006 as Red Bull New York after the Austria-based energy-drink company bought the franchise from Philip Anschutz, a sports-and-concert magnate who at one point owned six MLS teams. The new owners inherited a deal that Anschutz had signed the previous year to move the team out of Giants Stadium and into a new $200 million facility in Harrison; the town agreed to buy and clear the land for the stadium, while Hudson County chipped in with a $15 million parking garage to serve soccer fans, commuters and the residents of 7,000 units of new housing that were planned to accompany it.

The new 25,000-seat stadium has hardly been a runaway success for the team. Official attendance has hovered around three-quarters of capacity, but this number is widely believed to be inflated by ticket giveaways and no-shows. Still, the venue is a vast improvement over its cavernous predecessor in the Meadowlands, with intimate sight lines and aluminum stands that echo with the stomping of feet after scoring rallies.

The move to Harrison was part of a league-wide push to place teams in soccer-only facilities, typically located in struggling suburban towns looking for an anchor to drive development. From 2006 to 2008, three other MLS teams—the Chicago Fire, the Colorado Rapids and the Philadelphia Union—moved to the ’burbs. The insistence on soccer-only stadiums faltered in 2013, however, when the owners of English Premier League powerhouse Manchester City F.C. offered the MLS $100 million for an expansion franchise in New York—even if the club had to play its home games for the foreseeable future at Yankee Stadium.

The exact impact of the new team, New York City F.C., on tristate soccer fandom is uncertain. “We’re firm believers that rivalries in all sports are what help drive popularity,” says Dan Courtemanche, an MLS vice president. Marc de Grandpre, general manager for the Red Bulls, adds, “I think the pie is big enough for two teams.” He notes that Red Bulls’ season tickets for the 2015 season, which starts March 8, are being renewed at a record pace.

Dave Martinez, who writes the Empire of Soccer blog, has a different view. “If you’re loyal to a team, it’s going to take more than a shiny new toy in the playpen to take you away,” he says. However, he expects the Bronx-based team to make a strong promotional push, backed by the advertising reach of the New York Yankees, who are 20 percent owners of the new team. “When it comes to marketing, NYC F.C. is going to kill them,” says Martinez.

It’s an especially tricky moment for the Red Bulls to be facing a new rival. Though the team is coming off two successful seasons—earning a Supporters’ Shield trophy for the league’s best regular-season record in 2013, and a trip to the conference finals last year—it also just lost the longtime face of the franchise, French goal-scoring wizard Thierry Henry, to retirement. With NYC F.C. signing 2010 World Cup champion David Villa and former Chelsea midfield great Frank Lampard, the weight of star power has decidedly shifted to the Bronx. It doesn’t help that the Red Bulls recently fired coach Mike Petke, a former Red Bulls player and fan favorite, and replaced him with former Montreal Impact coach Jesse Marsch. The move prompted one fan group to raise a reported $5,500 for a billboard along I-280 protesting the change.

De Grandpre says he’s not worried, touting the superior game experience the Red Bulls can offer at a soccer-only stadium. Asked what his club plans to do to fight for soccer fans from New York—about one-third of Red Bulls season and group ticket holders, and half of individual game ticket buyers are from the New York—he says that the team’s strategy is to “celebrate our history.”

The team’s financial health is hard to determine. Forbes estimates that the Red Bulls lost $6.3 million in 2013, as did about half the teams in the league—but that was before MLS signed a new, more lucrative TV deal.

At the team’s final home game of 2014, a November 23 conference championship loss to New England Revolution, Red Bulls supporters polled by this reporter insisted they would stick with their team, but were unclear on what other fans might do. “If you’re a Red Bulls fan, you’re going to stay,” said Manhattanite Dan Ramos. “If you’re a fair-weather fan, you’re going to go to Yankee Stadium. And if you’ve got kids, your kids may determine it.”

The outcome of Harrison’s stadium gamble remains equally fuzzy. In exchange for the town’s $40 million investment, the Red Bulls agreed to pay just $1 a year rent, plus $125,000 in payments in lieu of property taxes, or PILOTs. (The team received a full property-tax exemption, though this is currently tied up in legal issues.) The rest of the city’s payback was to come out of PILOT payments from new hotels and apartments that would accompany the stadium.

Thanks in part to the economic downturn, construction around the stadium started slow, with dire effects on city revenue. In 2011, Harrison’s bond rating sunk as low as Detroit’s. In fact, all of the new suburban soccer stadiums provided weak initial returns on taxpayer spending. The Philadelphia Inquirer last year described Philadelphia Union’s new PPL Park in suburban Chester as “an island among vacant land and dilapidated buildings.” Bridgeview, the Illinois town that became home to the Fire, is facing millions of dollars in debt and a tumbling credit rating.

At least in Harrison, the development tide has begun to turn. The Water’s Edge luxury rental complex and Element hotel opened last fall, and three more housing developments are under way. James Fife, who took over as Harrison mayor after Town Hall fixture Raymond McDonough died of a heart attack at his desk in February 2014, notes that Moody’s Investors Services raised the town’s bond rating out of junk status in September and says annual PILOT payments on new buildings are now enough to cover the stadium bond debt. “As of right now, anything that comes online is money that goes directly to the town.”

Most of the new construction, however, is not near the stadium, but adjacent to the PATH station, on the other side of the NJ Transit tracks. That’s thanks to the ongoing $280 million renovation of the PATH station, scheduled for completion in 2017. Mayor Fife and local developers and business owners credit the PATH project, more than the stadium, as the catalyst that sparked interest in Harrison.

“The new PATH station—it’s a whole different world,” says Mike Garcia, co-founder of Cork Wines in Hoboken, of his decision to open a Harrison branch. “I think it’s a town that’s going to be on the map really soon.”

In fact, only one residential project, Russo Development’s 400-unit Vermella Harrison rental-apartment complex, is rising amid the empty expanse near the stadium site. The high-end apartments, slated to open later this year, are going up along Frank E. Rodgers Boulevard, where it heads toward Newark’s Ironbound district. Another developer, Advance Realty, has yet to break ground on its luxury rentals, planned for several blocks adjacent to the stadium. Six more lots between the stadium and the train station remain vacant. One nearby parcel may be used for a stadium-specific parking garage; de Grandpre says talks with the town are in the early stages.

Given the PATH renovation and Harrison’s plum location for a quick commute to lower Manhattan, Jersey City and Newark, some question whether Harrison needed to kick in $40 million for soccer. “If the driver of redevelopment is the PATH station, and if the stadium is just as close to the PATH station as the development, wouldn’t you want to keep some of that land and develop it as mixed-use residential?” wonders Jon Whiten, deputy director of New Jersey Policy Perspective, a group that researches issues in the Garden State.

Devoting so much space to a stadium creates a “sort of void,” says Whiten. “It doesn’t create a feeling of a neighborhood, and that seems to be increasingly what people want when looking for places to live in New Jersey.”

Neil deMause is a Brooklyn-based freelancer. His book, The Brooklyn Wars, a look at the transformation of that borough, will be published in mid-2015.