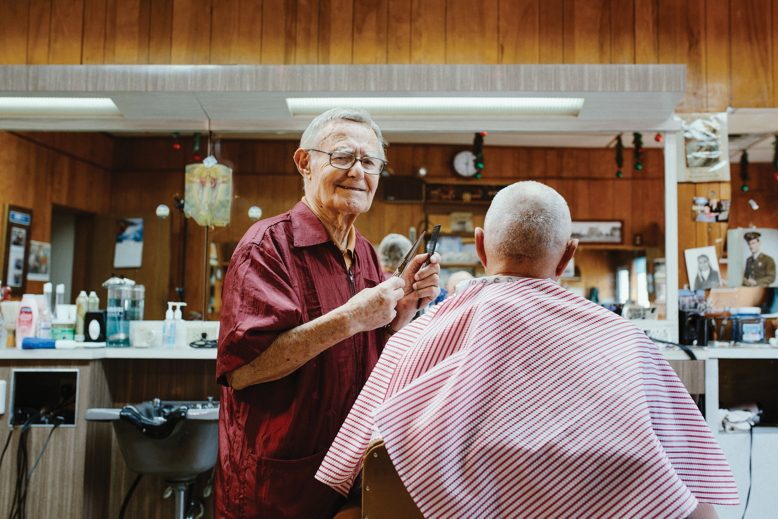 Joe Barca wants May 26 to be like most any working day—never mind that it’s his 100th birthday. Despite his advanced years, the owner of Barca’s Barber Shop in the Salem County town of Elmer still enjoys a steady hand and precise cutting skills.

“I don’t feel old,” says Barca. He’s adamant about that.

Born in Glassboro, Barca went with his family when they returned to Sicily when he was three. By age 10, he had learned to wield scissors and a razor in a Sicilian barber shop. As a teenager, he brought his scissoring technique back to Glassboro, where his grandparents set him up in a barbershop with his brother, Phillip. Except for a four-year stint in the Air Force during World War II, Barca has been cutting ever since.

In 1952, Barca purchased his own shop in Elmer. The simple pleasures of small-town life have served him well. Up at 5 am, Barca eats breakfast and drives his 2001 Pontiac Grand Am to the shop five days a week. Throughout the day, customers settle into Barca’s barber chair—which is only half as old as the proprietor. They are likely to get an earful from Barca on a host of topics. “Talking to Joe is like talking to a history book,” says Brian Mansdoerfer, 43, of Franklinville, a 15-year customer. Mansdoerfer is a relative rookie compared to 68-year-old Nick Pramov of Pittsgrove, a Barca client for 40 years.

“Every person who comes into the shop is special,” says Barca. “I like to make them laugh.”

Pramov commends Barca for being a mentor to many. That would include Barca’s son, Joe Jr., a barber since 1963. “Dad has inspired me to work hard, live a good life, and be kind to people,” says the younger Barca, one of Joe’s three children. Joe Sr.’s wife, Rose, died in 1992. They had been married 49 years.

The Barca family will celebrate Barca’s 100th birthday with an Italian-themed party, 10 am to 4 pm, May 26, in the appropriately named Elmer Centennial Park. Just the same, Barca plans to start the day tending to his clients.