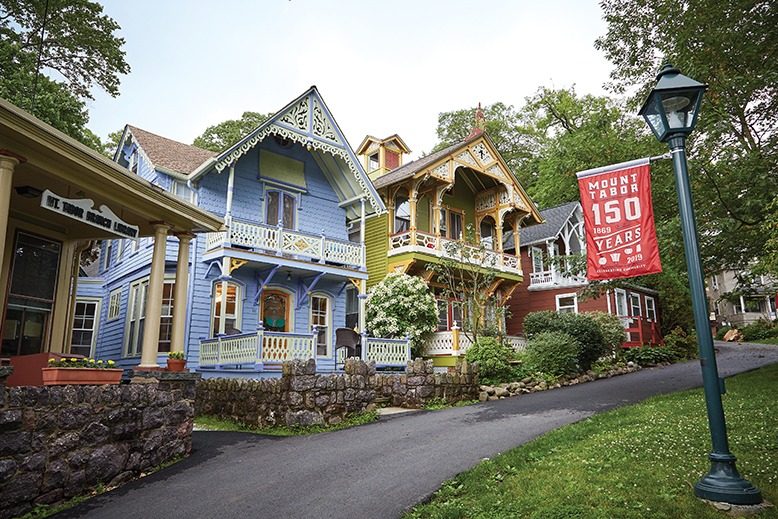 Tucked inconspicuously along the edge of busy Route 53, a stone’s throw, yet a world away, from the strip malls and fast-food restaurants of neighboring towns, sits the village of Mount Tabor. Founded in 1869 as a Methodist camp-meeting ground, the village has evolved into a year-round neighborhood rife with history and old-fashioned charm.

Although no longer part of the Methodist church, Mount Tabor retains a strong sense of community. That’s largely because the homes are packed tightly on its hilly streets; originally built as summer tents and cottages, most homes are set on compact, 25-by-16-foot lots. The approximately 350 individual homes—many of them pocket-size gingerbread cottages, 220 of which are in the historical district—are as unique as the residents who occupy them.

“What we have here,” says Michelle LaConto Munn, the volunteer president of the historical society, “is a tight-knit community. We walk to everything, so we actually see our neighbors. That fosters community.”

Central to the community is Trinity Park, the town square of sorts. The picturesque park is located adjacent to the post office (residents must collect their mail there), the old firehouse, a few offices and, a bit farther down the hill, the train station. Virtually everything is within walking distance, creating the feel of a small-town where just about everyone knows everyone else. The town’s place in history was recognized in 2015, when the Historic District was added to National Register of Historic Places and the New Jersey State Register of Historic Places. The second-floor balcony of the Merzattas’ circa-1877 home overlooks Trinity Park, where 9-year-old Laurily regularly meets up with classmates to play. Photo by Laura Moss

Danielle and Chris Merzatta had a checklist when shopping for a house. “We were looking for a place with a walkable train, walkable grocery store, walkable playground, walkable post office,” says Danielle. Then residents of Mendham, they found a promising house on Zillow, packed a picnic and headed to Mount Tabor. The original house didn’t pan out, but while enjoying their picnic they spotted a compact Victorian with a for-sale sign and a handwritten phone number. Chris jumped. 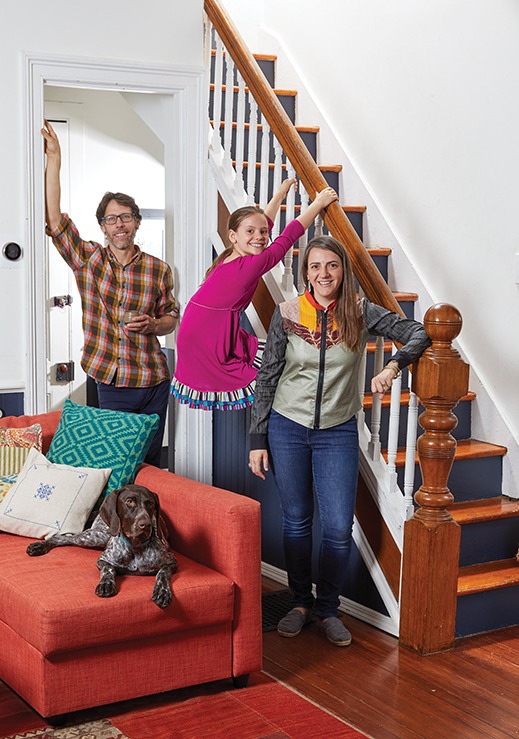 “He said, ‘I don’t care what it takes, I need to buy that,’” says Danielle. And they did. (The sellers were moving to a larger house in the village. “People tend to move up as their family size increases,” says Chris.) The 1,350-square-foot, two-bedroom house is located right on Trinity Park. Built in 1877, the house sits on a double-tent site, adding to its appeal. “This house was a big deal at the time,” says Chris. “Every house here has so much history.”

Upon moving in, the Merzattas immediately rewired the whole home. “Our biggest contribution is hidden,” Chris jokes. The couple also restored the original pocket doors between the living and dining rooms. “They were stuck open,” says Chris. “You couldn’t even see the glass.”

Three years in, the couple, who are both jewelry designers, just opened Merzatta, a shop in nearby Morristown, and are thrilled with their move. “You immediately have 50 new friends,” says Chris.

Daughter Laurily, now 9, echoes the sentiment. “I love it here,” she says. “Kids are basically everywhere. I’ll be doing whatever inside, and I’ll hear kids screaming outside, and I’ll just run out and play.”

Michelle LaConto Munn never planned to settle in New Jersey, let alone Mount Tabor. She and husband Eric grew up in Ohio. When Eric was transferred to the Garden State for work, the Munns came for a weekend they called the “the midwest test.” “We literally walked around neighborhoods to see if people would say hi. Mount Tabor passed the test,” says Munn. The couple bought their first Mount Tabor home in 1995, then moved to their current house in 2000. Originally two separate houses—“We call it a double-wide,” jokes Munn—the homes were built in 1875 and joined by a previous owner. Since the Munns moved in, it’s  lived up to its name: the Munny Pit. They rebuilt the front porch and brought back the gingerbread detailing, carefully reproduced from vintage photos. They also painted the exterior and replaced the roof.

Inside, “we accentuated the historical details,” says Munn, refinishing floors and updating the kitchen and baths. The entire Munn family has embraced the community wholeheartedly; son Noah, now 20, was elected King of Children’s Day (an annual community-wide celebration) in 2015. And Munn herself took on the volunteer role of president of the Historical Society. “We were looking for an area that had a strong community,” she says. “We found it here.” Left: The Munns’ historic home has been carefully restored, including replicating the original gingerbread detailing. Right: Ruth Blazure has fond memories of growing up in Mount Tabor, before cars or technology. She now lives on the Hill with her daughter and son-in-law. Photos by Laura Moss

Ruth Blazure has lived in Mount Tabor literally all her life. “The house where I was born still exists,” she says. Now 89, Blazure was a member of the first graduating class of Mount Tabor School and relishes her memories of a time with no cars and no technology. “Oh my goodness, it was wonderful growing up here,” she says. “We had so much fun.” Blazure recalls singing in the church choir, carrying a Maypole for Children’s Day, being a Girl Scout—her troop leader eventually became her mother-in-law—and, in winter, carefree sleigh riding in the neighborhood of larger homes called the Hill. Widowed in 2007, Blazure now lives with daughter Jacque Corcoran and her husband, Jeff, in one of the homes on the Hill, near the water tower. “When we were younger, the whistle blew on the water tower at 5 pm,” Corcoran says. “That meant time to go home.”

Blazure still treks to the post office most days; it allows her to keep a pulse on the community. The three-block walk can take up to an hour, not because of her pace, she jokes, but because she passes so many neighbors to greet. “As a teenager, I knew everyone,” she says. “Now, maybe only half the people here.”

Tickets are $25 per person in advance or $30 the day of the tour. For advance tickets, information and directions, visit mounttabornj.org, or call 973-975-0001.