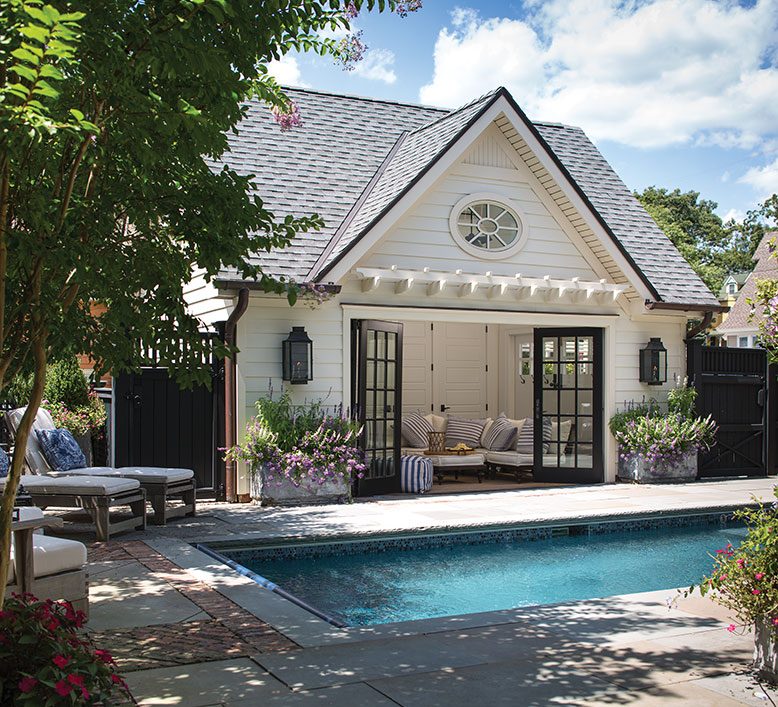 The pool house is a popular "flophouse" for the family as well as neighborhood kids.
Photo by John Bessler

It was two weeks before Christmas 2005 when an electrical fire swept through Marc and Laura Feaster’s Island Heights home, burning it to the ground. Marc and Laura, their three children and the family dog, Maisey, escaped the middle-of-the-night blaze, but the family lost everything–even the presents under the tree.

The charming town of Island Heights, nestled along the steep bluffs of the Toms River, was a special place for Marc and Laura; they both grew up summering and learning to sail in the tiny Ocean County hamlet. The Island Heights Yacht Club—one of Barnegat Bay’s 12 yacht clubs—became central to their lives. When they married, Marc, the founder and manager of two hedge funds, and Laura decided to make Island Heights their home. In time, their three kids—Kaitlin, now 22; Mac, 20; and Trevor, 18—became avid sailors too.

After the Christmas blaze, Marc and Laura considered rebuilding, but were apprehensive about returning to the scene of the devastating fire. Instead, they moved north about 35 miles to Shrewsbury. But the lure of Island Heights remained strong. After the death of Laura’s parents, she and Marc were able to purchase their home—the Island Heights place where Laura had summered as a child. They razed the house and started afresh, creating a new summer house that looks as though it has been there for a century. “The location was so sentimental,” says Laura. “It was the perfect spot to start new.”

The Feasters had a clear vision of what they wanted to build. “Our inspiration was to create a house that looks like it belongs in Charleston [South Carolina],” says Laura. Southern-inspired features would include a two-tiered, colonnaded porch, gas lanterns and tall, shuttered windows.

Working with Red Bank-based architect Eric Wagner, they designed a narrow house to suit their compact lot. “We wanted to take up as much of the property as we could so there was very little yard maintenance,” says Laura. “Eric got the idea right away.”

The Feasters brought in builder C.B.Hembling and Son, of Shrewsbury, and Red Bank-based interior designer Betsy Berner—the same team that had worked on the their Shrewsbury house.

The new house was to be just under 3,000 square feet, so it was essential to make every square inch count. “It’s not a large house,” says Laura, “but it lives large.” All three Feaster kids are college age, but still come home for summers. That means four bedrooms are essential—plus a finished basement for guests. A wide-open room on the main floor combines the family room, dining room and kitchen. “I wanted an area where I could be in the kitchen and the kids were all around me,” she says. “It forces family togetherness.” High ceilings—a Charleston-inspired touch—make the space appear significantly larger than it is.

Outdoor living is paramount to the Feasters’ summer lifestyle. With that in mind, French doors create a seamless transition to the cozy backyard patio, pool and pool house. “The backyard and pool house are an extension of the main house,” says Laura. “It’s a huge gathering space.” Joking about the continual flow of her kids and their friends, she adds, “The pool house is a total teenage flop house.”

Punctuated with an enormous overstuffed sofa and a large-screen television, it’s the perfect hangout. There’s also an entire wall of floor-to-ceiling cabinets jam-packed with sailing gear, beach towels and other summer paraphernalia.

Back inside the main house, Laura worked closely with Berner to design a casual yet classy living space with nautical overtones all around. The design theme was suggestive of a classic yacht, with bead-board paneling and elaborate moldings in every room, along with the high-gloss finishes.

“I had to convince Laura to paint the trim black, including the window muntins,” says Berner, but every other design idea was an easy sell. “The look is classy nautical,” adds Berner. “It’s old Hollywood, a classic Chris-Craft boat, Ralph Lauren with his sailing theme.”

When it came to furniture, Laura had a clear vision. “I wanted navy blue and white,” she says. The pair made frequent shopping trips to find the right pieces, some custom, some not. “Everything is casual. There’s no pretense,” says Berner. “It’s just easy living.”

The home has become a favorite hangout space, but not just for family members. Frequent visitors include neighborhood kids and friends from years of summers spent sailing. “Sometimes I look out the kitchen window and there are 19 kids in the backyard,” says Laura. “That’s the whole idea.”