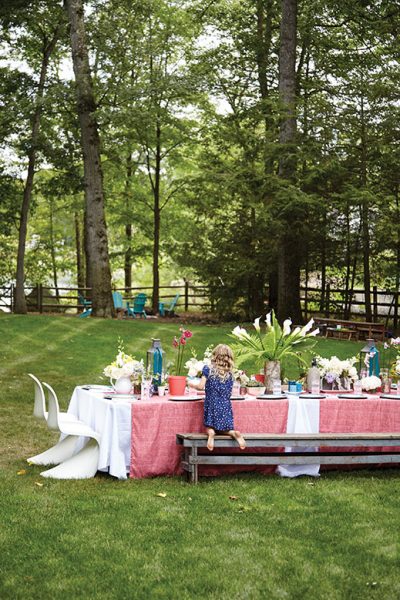 Bella Levison sets the table for a dinner gathering in her family’s spacious Franklin Lakes backyard.
Photo by Laura Moss

Anya and Bella Levison are in the kitchen again, making a mess. The mozzarella curds they are kneading just don’t want to stay in the bowl. No worries. Their mom, Michal, is just as obsessed with food as they are­—and encourages them to join in the preparation.

“Food is central to our life and family,” says Michal. Over the last three years, she and her husband, Zack, have transformed their farmhouse in Franklin Lakes into an eclectic setting for food, fun and festive entertaining, outdoors and in.

Levison’s passion for food started as a youngster growing up outside Tel Aviv. “My mom threw me in the kitchen when I was five,” she says. “She gave me a stepstool and a cookbook and said, ‘have at it.’”

Similarly, Michal and Zack introduced the love of food to Bella, now 7, and Anya, 4. “From the start, we developed their palates,” Levison says. “The process began at the age of four months, when we would feed the girls our meals ground up. They ‘chewed’ steak before they even had teeth!” The girls’ favorite foods? Octopus and broccoli.

Levison places an emphasis on healthy foods grown locally. “The idea of local food is near and dear to my heart,” she says. The family grows what it can. Their
garden yields zucchini, tomatoes, cucumbers, peppers, cabbage, radish, beets, celery, lettuce, eggplants, melon, squash, onions, strawberries, jalapeños, and a slew of herbs, including cilantro, mint, parsley, sage, thyme, dill, rosemary and basil.

Cooking, too, is a family affair. “It’s all math and science and laughing and understanding how the food got there in the first place,” she says. “I want my girls to know how food is grown and how cows are milked.”

The family members work side by side in the kitchen. “It’s not like I’m crazy; we don’t spend five hours in the kitchen preparing a meal,” she says, “but we like to prepare together and share together. We relax and chat and connect. That’s my whole being.”

Food isn’t levison’s only artistic outlet; she’s the creative director of her branding and event design firm, Michal Dagan Designs. She scoffed four years ago when Zack, owner of a corporate maintenance company, suggested they leave Manhattan and put down roots in Franklin Lakes, where his parents now live. (He grew up nearby in Glen Rock.) But then the couple found a house where she knew she could make her mark. Set on almost an acre of land, it has a sprawling, flat yard that borders a lake. “The view is what sold me,” she says. The couple quickly began renovating the house, completely redesigning it into what she calls a slightly modern, Bohemian farmhouse.

Levison worked with local architect Pam McBride, but her own ideas drove the project. “I fought to have the open plan on the first floor,” Levison says. “Everyone cautioned me about not having more walls, but I stood my ground.” She got her open-floor plan, the ideal space for gatherings. Despite being constricted by 8-foot ceilings, the room feels “expansive and not cramped,” Levison says. “No one can believe how low our ceilings are.”

Designing the kitchen was a treat. Countertops in various materials provide ample workspace. Perimeter counters are Caesarstone. “It’s basically maintenance free and super durable,” Levison says, “and it’s an Israeli product.” The massive island is topped with Vermont Imperial Danby marble. It’s extremely smooth and stays cool, which is essential for rolling pastry or chocolate. And it’s a less porous  marble that stays clean. “The marble is still white after three years of heavy use, with spills of beets, red wine and tomato sauce,” says Levison. The backsplash is a simple, white subway tile, grouted in gray to make it pop. Island cabinets are gray; perimeter cabinets are white topped by gray counters. Knobs are oil-rubbed bronze cup pulls and latches. “I wanted to feel like I was inside a chocolate shop in the 1900s,” Levison says. The floor is American walnut, a choice that’s kinder than tile on the legs and backs of cooks spending hours on their feet.

The kitchen opens into the dining room and a spacious family room. A 12-foot addition gave square footage to all the rooms and allowed space for a Steinway grand piano. “I always dreamed of having an incredible instrument,” says Levison. “I do now. I cherish it.” Furniture throughout the house is a mix of old and new, heirlooms and garage-sale finds. Much of the artwork is by Levison’s mother, the painter and sculptor Edna Dagan. It mixes seamlessly with works the couple has collected through years of travel.

“I’m an eclectic designer,” Levison says. “The finishes are relatively timeless, but my accents are a bit wacky.” For instance, the first-floor powder room is painted black to showcase the rainforest-marble slab countertop. A gallery of artwork covers the walls.

The Levisons regularly host family and friends for extravagant—but healthful—backyard spreads. The emphasis is on grilling. “We’ll grill a lamb,” she says. The girls always participate, picking fresh vegetables and herbs from the garden. “We prepare easy, delicious recipes that the kids can help do,” Levison says. “We’re building a family through food.”