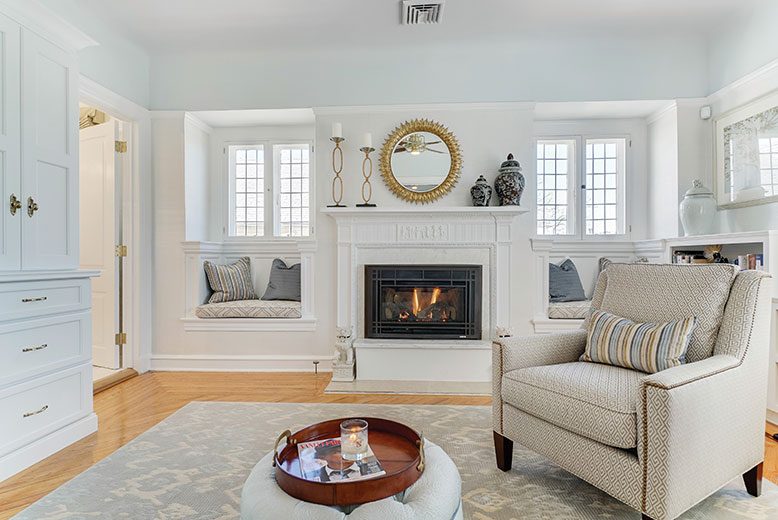 True peace may lie within, but it doesn’t hurt to surround yourself with a calming space to escape the stress of daily life. We spoke with two interior designers about the methods they used to create peaceful retreats for two very particular clients.

Tasked with transforming a chopped-up, oddly configured space into a spa-like master suite, interior designer Jon Martinez tapped into his inner Zen. His clients—Florida residents who spend summers in their 150-year-old Georgian-style home in Asbury Park—“wanted a space where they could escape the chaos,” he says. “They wanted to feel like they’re staying at a luxury hotel.”

The 800-square-foot space originally included a bedroom, sitting room, two closets and a cramped bathroom. “It definitely needed to be updated,” Martinez says. He combined several of the  smaller rooms, leaving four distinct but connected spaces: the sleeping area, the sitting room, a walk-in closet and a spacious bath.

Now comes the calming part. Martinez chose a palette that relates to nature: blues and greens and creams.  “The colors are so soothing,” he says. For accent, he mixed in pops of gold and silver. The bedroom and sitting room are both wrapped in iridescent grass-cloth wallpaper; the ceiling throughout is a pale blue. For ambience, Martinez added a gas insert to the existing fireplace. It quickly heats up the sitting room on a chilly night.

The expanded master bath boasts an expansive vanity with double sinks, an Italian marble floor outfitted with radiant heat, and a spacious walk-in shower with three showerheads. Reflecting the home’s location four blocks from the beach, one wall is faux-driftwood porcelain tile; the other walls are covered in a silver-leaf floral wallpaper, adding a bit of glitter to the space, Martinez says.
The reconfigured space serves the clients well. Says Martinez: “You can close the door, sit down, read a book, turn on the fireplace and have a glass of cognac.”
Interior designer Maria Bevill’s client wanted a similar spa-like retreat in her four-bedroom home in Basking Ridge. The  mother of three “wanted to be able to relax, watch TV, escape and have a cup of coffee,” says Bevill.

The master bedroom was already a soothing and calm space, says Bevill, with a gas fireplace and a balcony overlooking the backyard and the pool. Of course, the homeowner shares that with her husband. On the other hand, the client had lots of ideas for making the bath/spa a relaxing retreat. At 500 square feet, it features a water closet, dressing  area, coffee center and two closets. Bevill designed the room around a large, freestanding Jacuzzi tub, centered beneath a bank of windows. “It makes you say, ‘Ooh, I want to be there,’” Bevill attests.

The monochromatic color scheme adds to the serenity. However, Bevill warns, “if you’re not careful, it becomes very boring.” She created texture with touches of gold and silver on walls, floor and fixtures. “People think you can only use one, but it’s really more interesting to do a mix of metallics,” Bevill says. The floor is mosaic tile with tiny metallic flecks. The walls are faux painted in a subtle pattern that adds depth. “Instead of the walls looking flat, they have a bit of life,” she says.

While the space is meant for mom, the one who seems to enjoy it most is her youngest daughter. “She loves being in that Jacuzzi tub and watching TV,” Bevill says.