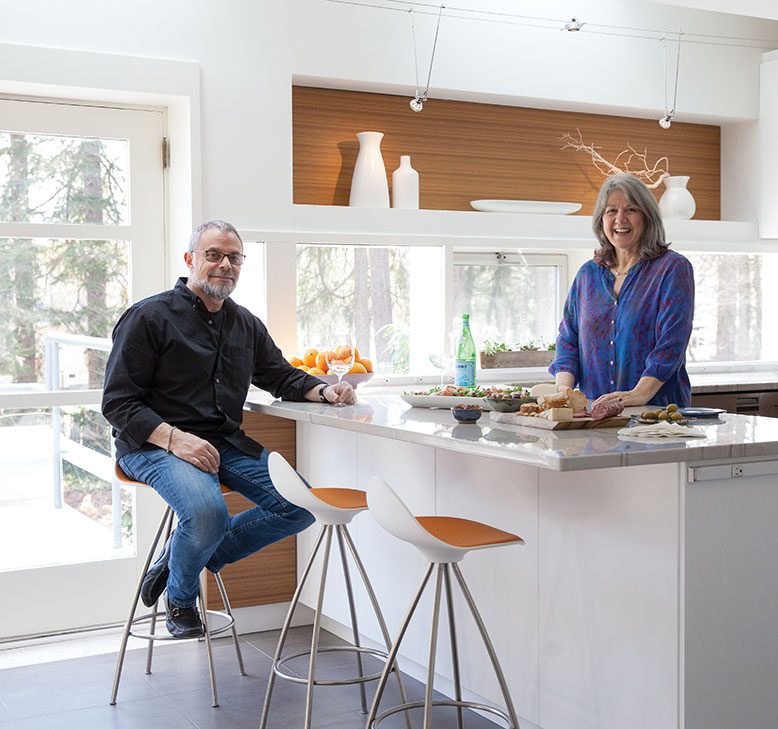 Fran and Richard in their renovated kitchen. The couple kept the layout but upgraded all the materials. The shelf nook above the window is original.
Photo by John Bessler

Empty-nesters Fran and Richard Eber pulled off a perfect about-face when they traded their arts-and-crafts-style family home for a mid-century-modern gem. After nearly 20 years in Chatham with their two sons grown and gone, the Ebers started looking for a new home to fit their new lifestyle.

“We love architecture, and we love giving old homes new life,” says Richard. The pair had transformed their Chatham ranch; now they were ready for another project. Four years ago, they started looking for real estate in Princeton, where Richard commuted for his job as an advertising executive. Fran, a mixed-media artist whose creations are shown at Mana Contemporary, a much-talked-about gallery in Jersey City, can work pretty much anywhere.

Their search took them to a four-bedroom split-level, built in 1951 on a quiet residential street. The home, last renovated in 1975, was sorely outdated. “The footprint was there,” says Fran, “but we needed to make it work for us.”

The first challenge was updating everything. “The kitchen was exactly like it was from 1975,” says Richard. “Not one thing had changed.” Fran tackled the new design herself, maintaining the layout but overhauling the materials. Out went the linoleum floor, butcher-block countertop and laminate cabinets. In came a porcelain-tile floor, granite counter and custom-designed wood cabinets. Fran expanded the existing peninsula to create a sitting area. Timeless kitchen features—the built-in cubbies above the sink and the skylights above the breakfast area—remained intact from the original design. “I just modernized it,” says Fran. “I like to think I took it out of the ’70s. But it’s still cool.”

Other rooms also got a face lift. The den got a new stone fireplace surround and mantel; the expansive living room got dramatic lighting worked into the existing beams. The unique, curved-wall hallway connecting the spaces only needed a fresh coat of paint.

The master bedroom was another story. The space, while large,  didn’t work for the Ebers. They wanted higher ceilings, backyard views, a large, walk-in closet with laundry, and a master bath with an oversize shower and soaking tub. While contemplating their options, the couple contacted renowned Princeton architect Alan Chimacoff, the same architect who had renovated the house 40 years earlier. Although he no longer works on residential projects (his primary focus is institutional design), Chimacoff was happy to lend a hand. “Most architects think of their houses as their children,” says Richard. “Alan was willing to take this on.”

With Chimacoff’s help, the Ebers reconfigured the master bedroom to accomplish everything on their extensive wish list.

Next, the Ebers turned to furnishing the home. They had sold virtually all their Chatham furniture. “Arts-and-crafts furniture definitely wouldn’t work here,” says Richard. “Mid-century should be more colorful, more whimsical.” The Ebers became regulars at the now closed Princeton outpost of national retailer Design Within Reach, which carries authentic modern-design furniture.

Over a three-year span, they filled the home. “Minimizing was the most important thing,” says Fran. “It had to be simple.” Significant acquisitions included an orange Saarinen Womb chair; the Hansen Little Friend table next to it (“a much more important piece than you would think,” says Fran); and the light-blue leather sectional sofa. For the cozy den, they purchased an Eames lounge chair.

In the midst of the project, Richard changed ad agencies and now commutes daily to New York City (his official title at his new agency is “the creative guy”). But the Ebers love their new life in Princeton, where they’ve discovered an active arts community and interesting neighbors, including a wood sculptor and an expressionist painter. “Princeton is pretty unique,” says Richard. “The houses are quiet on the outside, but people express themselves on the inside.” Precisely what he and Fran have done.