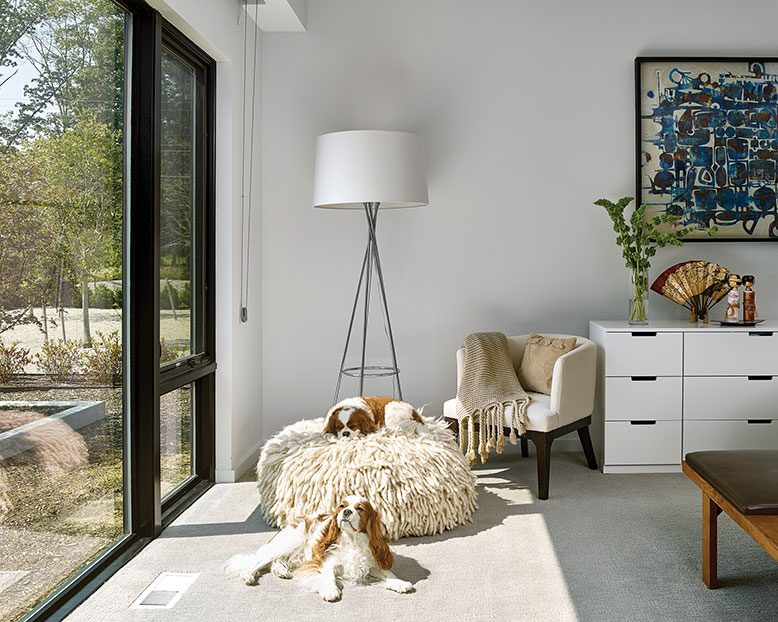 Obie and Indy, the couple’s King Charles Spaniels, find a sunny corner in the master bedroom.
Photo by Jeffrey Totaro

Faced with an empty nest, Melanie and Christopher Tantillo had a clear set of priorities for their next move: They wanted to be in a rural setting with plenty of land, they wanted to be closer to Chris’s parents in southern New Jersey, and most of all, they wanted to design and build their own home.

Melanie and Chris discovered it all in a rundown farmhouse and barn in Shamong, in Burlington County. Located just an eighth of a mile from Chris’s parents, the 1-acre property is surrounded by 30 acres of horse farms. It was sorely in need of some TLC. The Tantillos pounced.

Chris is a principal in Tantillo Architecture in Philadelphia; Melanie trained as an architect and now works in commercial furnishings. They were the right team for what turned out to be an eight-month project.

The couple’s first move was to demolish the dilapidated farmhouse. “The existing house was a total teardown,” says Chris. “But we were able to salvage all the wood and use it on the exterior of the new house.”

That new house? A massive and modern addition to the original barn. “The contractor wanted us to tear it down,” says Melanie, “but we were committed to reusing the existing building.”

The Tantillos designed their new house around the old barn, which now serves as a two-car garage. The result is a U-shaped house with an outdoor courtyard in the middle. The glass, stucco and wood structure blends into the landscape. “You can see through the entire house to the horse farm out back,” says Chris.

Despite its modern style, the home’s design was inspired by rural and rustic farm structures. “It’s not a house that sits on the site,” says Chris. “It’s a house that fits into the landscape.” The couple selected rustic exterior materials like stucco and wood, which don’t require much maintenance. To add interest, they had the cedar siding, salvaged from the original farmhouse, charred using a traditional Japanese technique. “We scorched and charred it, then applied a penetrating oil to seal and protect it,” Chris explains. The tongue-and-groove cedar is applied vertically on the lower portion of the house and horizontally on the upper part.
“The open-slatted siding is like the corn cribs of the area,” he says.

Inside, the layout of the first floor is open from room to room, with a wall of glass across the entire space. To the left of the main foyer is an art-gallery wall that connects to the master suite. To the right, the foyer leads to the expansive kitchen, dining room and living area. Upstairs, there are two bedrooms and a study. Natural light is abundant throughout. “Once inside, you’re very aware of how light works through the house,” Chris says. Ultimately, the house is 4,100 square feet of living space, with plenty of open entertaining space. “The open living area is such a cliché,” Chris admits, “but the one space flows really well. We can have 50 people in the house and it doesn’t feel cramped.”

The open kitchen design was a challenge. “It probably took me as long to pick out the materials for the kitchen as it did for Chris to design the whole house,” jokes Melanie. She selected a mix of solid walnut and glazed white cabinetry, marble countertops and flush-set stainless appliances. Flooring through the first floor is large-format 12-by-24-inch porcelain tile. The result is a sleek, neutral palette that unifies the entire house. Attention to detail was paramount. The living room has a gas fireplace; the wall around it is clad in white statuary marble, with a television set within. “The electronics are in the basement, so you don’t see the technology, just the TV screen,” says Chris.

The environmentally friendly house incorporates energy-efficient appliances, spray-foam insulation, LED lighting and a programmable Nest thermostat. A white roof reflects sunlight (to eliminate heat gain in the summer months), and motorized solar shades are programmed to descend during the heat of the day to protect against excessive warming.

The minimal furnishings consist primarily of repurposed pieces from their old house in Haddonfield. “Our previous house was a lot smaller,” says Melanie. “So we came with minimal furniture. But the scale of the new space was designed around what we had. It’s contemporary, but blends old with new.”

The couple moved in last November and were immediately embraced by their new neighbors. “Reaction to the house has been overwhelmingly positive,” says Chris. “Our neighbors walk up to us out of the blue. They’ve been watching it be built, so now they’re begging to be brought inside for tours.”

The couple love the rural lifestyle and their new home. “Any architect’s dream is to do your own house,” says Chris. “We had a dream what we wanted it to be at the end of the day. I think it’s coming out exactly as we had hoped.”