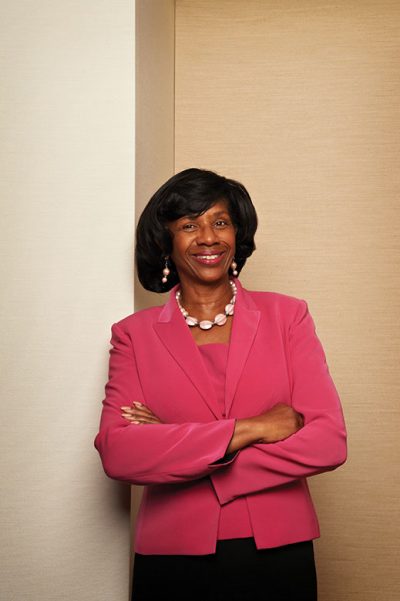 Paulette Brown, the first woman of color to head the American Bar Association, is making diversity and inclusion the signature issue of her tenure.
Photo by Jennifer Pottheiser

Don’t underestimate Paulette Brown. Others have, and time and again, she’s proven them wrong. On this early fall morning, the Morristown lawyer is the picture of sedate self-possession as she walks into the conference room at Locke Lord, the international law firm where she’s a partner. Pencil slim in a navy blue pantsuit, not an unruly strand in her glossily streaked bob, she couldn’t look more like the successful legal professional that she is. But get her talking about what she thinks really matters and a sense of urgency burns through, as if she is racing the clock.

In August, Brown, 64, became the first woman of color to head the American Bar Association, the more than 400,000-member advocacy organization for the nation’s lawyers. As ABA president, Brown has a bully pulpit from which to advance the causes she feels are critical to the profession—among them diversity and inclusion, signature issues for her in a profession that has been notoriously slow to diversify. According to ABA data, 88 percent of America’s lawyers are white, and while women represent half of all law students, only 17 percent of equity partners at law firms are female, and only 2 percent are women of color.

But the pulpit Brown now enjoys will be hers only until August 9, 2016, when her one-year term ends. When you’re out to change the world, that puts you on a tight schedule. It also calls for major multi-tasking. In November, for instance, Brown traveled to China with the ABA’s Section on International Law. The trip coincided with a webinar she agreed to lead on diversity and discrimination. The webinar kicked off at 1 am Beijing time. “So much to do, so little time,” she says.

Indeed. Over the course of her 40-year career, Brown has been in-house counsel for several Fortune 500 companies, founded her own law firm, sat as a municipal court judge, and served as chief diversity officer at the global firm Edwards Wildman, which merged with Locke Lord earlier this year. In her down time, Brown mentored hundreds of lawyers—mostly women—pushed law firms to hire more women and minorities, monitored elections in low-income communities (as well as in South Africa during the historic 1994 election of Nelson Mandela), and headed both the National Bar Association and the Association of Black Women Lawyers of New Jersey. She also chairs the New Jersey State Bar Association’s labor and employment division.

Amid all of this, Brown has not shrugged off challenges in her personal life. Two decades ago, she adopted an 8-year-old boy out of the foster system and raised him as a single mother. (He is now 31 and a kindergarten teacher.)

Tiffany Williams, an administrative law judge for the State of New Jersey and a longstanding mentee of Brown’s, attributes her extraordinary energy to “her passion and her purpose—her sense of why she is here on Earth.”

Brown grew up in a working-class family in Baltimore and attended the city’s then segregated schools, but in her achievement-oriented home, college was always on the horizon. Her father, a truck driver, told her and her siblings (two sisters and a brother) there were “no girl jobs and no boy jobs”; her mother, a homemaker, insisted that anything short of her best was unacceptable. Brown attended Howard University, one of the country’s storied black colleges, with a plan to go into social work. But her roommates were studying law, and the more she learned about the legal profession, the more she found it appealing. “I had the feeling that, as a lawyer, I could have a greater impact, I could have more tools,” she says. When she set out for Seton Hall’s School of Law on a full scholarship, a coworker offered what was perhaps meant as a preemptive consolation: “Don’t be upset if you flunk out in your first year.” Needless to say, that didn’t happen.

It wouldn’t be the last time someone underestimated Paulette Brown. A guidance counselor at Seton Hall pushed her—and, she says, other minority students—toward the public defender’s office or legal services. Brown ignored the advice and pursued corporate law, initially working in employee benefits. More than once, she showed up at court only to have the sheriff’s officer question why she was there. “He’d ask, ‘Was I the defendant? The plaintiff? The court reporter?,’” she remembers.

It’s not surprising that Brown has developed a passionate interest in what psychologists call “implicit bias”—the idea that underlying assumptions (about a group of people, for example) can skew the decisions we make. Implicit bias, says Brown, may help explain why more progress has not been made in having more diverse and inclusive law firms. If economic conditions force a firm to lay off staff, says Brown, those with the lowest billable hours are most vulnerable. And generally speaking, says Brown, because people of color are not getting enough meaningful assignments, resulting in low billable hours—it can lead to layoffs during economically challenging times.

Brown believes implicit bias can also result in sentencing disparities between black and white defendants. “When a person of color commits a crime, the assumption is, This is what we expected of you and this is why we’re going to give you a harsh sentence,” says Brown. “Whereas if a white person commits a crime, the thought is, This must be an anomaly, therefore we’re going to give you a chance.”

As ABA president, Brown has a unique opportunity to confront this alleged syndrome. She created the Commission on Diversity and Inclusion 360 to develop training materials to help judges, prosecutors and public defenders understand implicit bias and explore ways to address it. She’s also hoping to develop a set of instructions that would make jurors aware of the problem.

It’s unlikely, though, that anyone can banish implicit bias from the justice system until the legal profession itself is more inclusive. To that end, Brown has charged the commission with finding ways to bring more diversity into the field. It’s essential, she says, to start early. “We’ve got to disrupt the school-to-prison pipeline first of all,” she says, “to make sure kids graduate from high school and get to college.” Stephanie Scharf, a partner at Scharf Banks Marmor LLC in Chicago and a member of the commission, says that Brown “has both vision and energy to get things done, so I believe she will have a very profound impact on reenergizing the ABA’s focus on diversity and inclusion.”

Many of Brown’s other efforts as ABA president are intended to make sure “that the ABA is the go-to legal organization for all lawyers everywhere.” It’s a unique challenge. Conservative members of the legal profession have voiced concerns in recent years about what they view as the group’s left-leaning stances on issues like gay marriage and affirmative action. Others say the association is too far to the right. But Brown says the ABA includes “people across all disciplines and from all political parties.”

It is critical to share that good news at a time when the organization is just beginning to rebound from a decline in membership that began in 2006, largely due to the recession. Brown is doing that through her Main Street ABA initiative, which has her traveling across the country to meet with lawyers, including those who aren’t ABA members. Her goal is to travel to at least two states every month during her tenure as president to visit law schools and local bar associations, particularly in areas like Fayetteville, Arkansas; Jackson, Mississippi; and Missoula, Montana, that haven’t seen an official ABA presence in many years.  In an effort to inspire children of color and disadvantaged youths to pursue legal careers, she added Boys and Girls Clubs to her itinerary, bringing along a crew of young lawyers as exemplars. “If young people see something,” she says, “maybe they’ll believe that they can be it.”

When she suggested to her advisors that she visit two states per month, they thought she was stretching herself thin, given the other demands on her time including international travel. Once again, Brown was being underestimated: In September alone she traveled to six states for the Main Street initiative.

In fact, “go” is Brown’s default setting. When she isn’t jetting around the globe advocating for the ABA, she’s a passionate walker. She misses her three-day, 60-mile charity walks and is already thinking about some post-presidency R&R: “One of those hiking vacations in Europe,” she says, “where you walk 10 miles a day and then stay in some fabulous hotel and eat wonderful food and you do it for about 10 days, so you hike about 100 miles or so.”

Brown is aware that a year isn’t sufficient to accomplish all of her goals, so she’s making sure that the ABA commits to carrying out her initiatives over the next decade. She’s enlisting existing entities within the association—including the Commission on Women, the Center for Diversity and the Young Lawyers Division—to ensure that it happens. “No,” she says, “is not an option.”