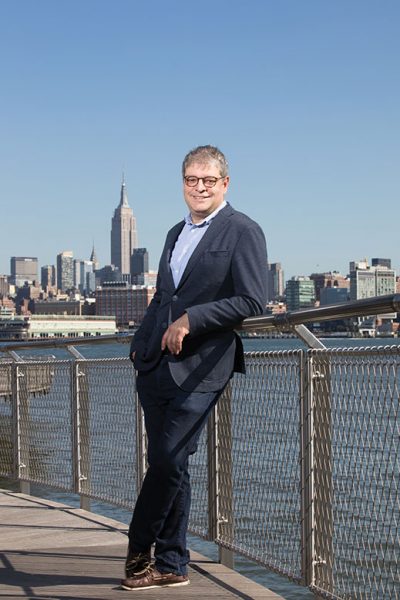 Aldo Civico travels the world to help find peaceful solutions to violent conflicts—and comes back to his own “oasis of peace” in his adopted hometown of Hoboken.
Photo by Christopher Lane

There’s a story the New Jersey entrepreneur Charles Rosen tells about Aldo Civico that can’t be repeated verbatim in a family magazine. In 2014, Rosen, whose business, New Ark Farms, employs ex-offenders, hired Civico, an expert in conflict resolution, to help his staff adjust to life in the workforce. At a motivational session, Civico homed in on a worker slumped in a chair and looking anything but motivated.

To illustrate what that position might look like, Civico threw his shoulders back and puffed out his chest, and the worker followed suit. Then Civico exhorted him to remember the last time he’d experienced the feeling, which turned out to have been years before, on the basketball court. Rosen notes that Civico’s less-than-gentle nudge was the first step toward the worker’s current incarnation as a model employee.

It’s not an approach you’d necessarily ascribe to a man who’s devoted much of his life to peacemaking, but then Civico, an assistant professor of anthropology at Rutgers-Newark and a lecturer in conflict resolution at Columbia University, isn’t your typical peacenik. His greatest inspiration growing up, he says, was his maternal grandfather, an Austrian who led a group of armed partisans against the Nazis during World War II. Civico, 47, grew up in Italy in the 1970s and ’80s, a turbulent era marked by internal terrorism fostered by the Red Brigades, a left-wing organization notorious for the kidnapping of high-profile politicians, journalists and others, as well as the more traditional terror wrought by the Mafia. At the age of 20, after graduating from the University of Bologna with journalistic ambitions and a degree in political science, he interviewed Leoluca Orlando, the mayor of Palermo, for Italian cable TV. Civico was so impressed with Orlando, a leading figure in the anti-Mafia movement, that he asked to join his team.  He moved to Palermo, and for the next several years served as Orlando’s senior advisor. The experience intensified Civico’s longstanding fascination with conflict: its underlying causes, its costs, and, most important, its potential resolution. That fascination would become his life’s work.

In 2000, it brought Civico to the United States, where he met Andrea Bartoli, who was at the time, a professor of anthropology and director of the Center for International Conflict Resolution at Columbia University. Civico joined the center (and would become its director in 2007). Bartoli, today dean of Seton Hall’s School of Diplomacy and International Relations, convinced Civico to pursue a PhD. in anthropology, a discipline, Civico explains, that “gives you the tools to see the cultural patterns that might create a system of conflict.” In 2001, he put those tools to work when the University of Antioquia in Medellín, Colombia, invited him to design and facilitate a conflict-resolution workshop for community leaders.

Civico entered a country riven by violence among warring right-wing paramilitary groups, leftist guerrillas, drug cartels and an often ineffectual government. Murders and massacres were commonplace.  And yet the citizenry still hoped for peace. Civico was so moved by their resilience that he decided to make studying them his primary fieldwork.

Civico visited a high-security prison where he met Francisco Galan, the leader of the ELN guerrillas. Later that summer, through a chance meeting with a journalist, he traveled to a hideaway in the rugged hill country of San Roque for an introduction to Doble Cero—a commandant of a major paramilitary group. “If you want to resolve conflict,” Civico explains, “the point of view of the victimizers needs to be heard as well as the voices of the victims.” But as he traveled to the camp, Civico wondered if he might have made a serious misstep.

To Civico’s surprise, Cero turned out to be a willing interviewee. As they talked, Civico began to understand that “the members of these groups were not just victimizers; they were hybrids, because they were victims as well, many drawn to the paramilitaries by a need to compensate for childhood deprivation.” The revelation led Civico to focus his research primarily on the perpetrators of violence and the forces that compelled them.

Between 2003 and 2008, Civico made repeated visits to Colombia, meeting with both victims and victimizers, an experience he chronicled in his 2015 book, The Para-State: An Ethnography of Colombia’s Death Squads. In 2005, thanks to his unique relationship with the ELN, he found himself acting as facilitator in cease-fire negotiations between the rebel group and the government. He continues to be involved in the process as an advisor. (Because the process is confidential, he says, he can’t reveal whom he’s advising.) Though those and subsequent talks have failed to lead to a cease-fire, this October Colombia announced the start of peace negotiations. “It’s actually the first time the ELN has engaged in a formal peace process beyond cease-fire negotiations,” Civico notes, a development about which he is both “hopeful and aware of the challenges.”

Given how many attempts at peacemaking stall or disintegrate, it’s surprising that Civico continues to feel hopeful about his vocation. But where others might see failure, he sees another step in the process. “There’s no such thing as failure in conflict resolution, only feedback that suggests how to change your approach and do better,” he says. “Like romantic love, peace needs to be constantly rekindled.”

Civico has continued to foster international conflict resolution in Haiti, Mexico and the United States, where he’s worked with prisoners and gang members.  In 2003, he evaluated peace-building efforts in Bosnia and Croatia on behalf of the United Nations Development Program, and in 2013 he trained Syrian community leaders to mitigate the effects of violence on a war-traumatized population.

Working in the realm of international conflict can take an emotional toll, which is why Civico has chosen to reside in a place he calls “an oasis of peace.”  He was living in a Manhattan high-rise in 2009 when friends in Hoboken invited him for a visit. “It reminded me of the Mediterranean,” he says, “the light of the sun, the water, the pace.” He moved to Hoboken in 2010 and has lived there since.

In recent years, Civico has come to the realization that, “in order to bring lasting change, there have to be shifts on an individual level.” To do that, he formed the Civico Group, a business offering workshops to CEOs, small companies, community leaders, prison inmates and everyday folks.

Civico describes himself as a “hybrid.” Yes, he’s a professor and an anthropologist, but he’s also a mediator, an advisor, a trainer and an entrepreneur—all of his efforts aimed at restoring peace in a world in which peace is often the most elusive of commodities. “You cannot just spend time in the comfort of academic circles, writing for peer-reviewed journals, and not share your insights and experiences with a larger audience and put those insights into practice to directly benefit communities in need,” he says.

He’d particularly like to expand his work with social entrepreneurs, like Montclair’s Charles Rosen, who are working to regenerate their communities.  Rosen says Civico’s team building has been indispensable to the success of his operations.  “Aldo’s work is at the core of what I’m doing,” he acknowledges.  “Aldo is essential.”