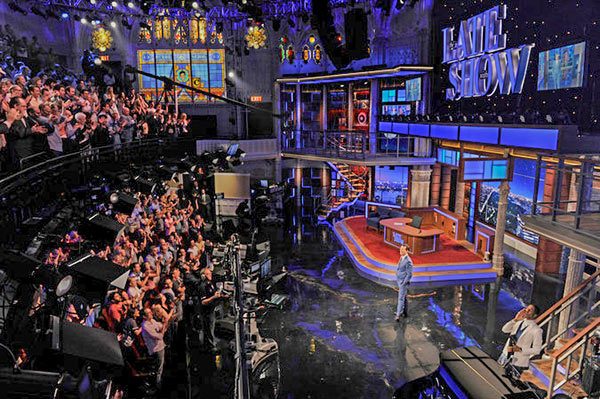 When Stephen Colbert was named to succeed David Letterman as host of CBS’ Late Show, he had to hire someone to design the stage set. An obvious candidate was his long-time friend and Montclair neighbor, Jim Fenhagen. Obvious because Fenhagen is a TV superstar in his own right, if one totally behind the scenes.

A soft-spoken South Carolina native, Fenhagen is one of the industry’s premier designers of stage sets, with 20 Emmy Awards to prove it. Fenhagen designed the sets for the Colbert Report, Jon Stewart’s Daily Show, John Oliver’s This Week Tonight, The View, CBS This Morning, ESPN’s new SportsCenter, Martha Stewart’s Martha, The Meredith Vieira Show and NBC’s 2004, ’08 and ’12 presidential election night coverage, to name a few.

But neither friendship nor an illustrious resume was going to win Fenhagen the job. “I had to compete to win it,” Fenhagen says. And win it he did. For all of Fenhagen’s many high-profile jobs, working with Colbert to create the new Late Show set, he says, “does feel like the biggest, most scrutinized job in my career.” The most eyeballs ever on a Fenhagen creation was a set he designed for Chinese television, “with like a billion people watching,” he says, “but that doesn’t mean the same to me as this. This is an iconic American tradition, to be part of one of the big three late-night shows.”

Fenhagen began work on the Late Show project in January, taking a tour of the Ed Sullivan Theater with Colbert and others involved in the production. “We were replacing a great iconic person in Letterman and inheriting a theater associated with another iconic person, Ed Sullivan. All that added to the pressure.”

The theater itself was, so to speak, the proverbial elephant in the room, the great challenge and opportunity that could not be ignored and made the job unique.

“I’ve designed other talk shows that have audiences,” Fenhagen says, “but they are normally built in TV studios, where you have a big open space and you can create anything you want. This had been converted to a soundstage, but it was still really an old-fashioned Broadway theater, and a beautiful one. It created different obstacles that really informed the design.”

The original 1927 theater (which Ed Sullivan’s variety show inhabited from 1953 to 1971) had a huge dome that was covered over with soundproofing, AC ducts and a dropped ceiling after Letterman signed with CBS in 1993.

“We wanted the audience to experience and embrace the theater,” Fenhagen says. “But one of the big concerns that Stephen and Jon Stewart—an old pal of Stephen’s, who is an executive producer on Late Show—had was, ‘How do we make this big theater intimate?’

“Stephen said, ‘We have to contain the comedy in the room.’ He plays off the audience, so if the audience is feeling connected to what’s happening on the set and is having a great time, it pumps him up, and he has a better experience. So creating that feeling of intimacy was huge.

“In order to get this giant space focused down to this one area of the desk and chair, I created a series of ceilings and balconies that bring the focus by steps down to the stage. These balconies are spaces that he will use, performers will use, the band will use, marching around, but they are not the important thing. I’m using them to bring the focus down and contain the comedy.”

The balconies also display Colbert mementos such as his mother’s pennant from attending the 1963 March on Washington and the Captain American shield that adorned the old Colbert Report set. The pennant rests on one of the wooden bookshelves that line a couple of the balconies. The shelves are filled with real books (including many donated by Fenhagen’s alma mater, Kenyon College in Ohio).

“The shelves are an homage to the old Colbert Report set,” Fenhagen says. “They’re there so he can display things important to him as well as send a message that he’s more of an intellectual; he’s a thinking man; he wants to have deeper conversations with his guests” and not just promote [stars’ latest projects.]”

All the above is macro.

“What everything comes down to,” Fenhagen says, “is the desk and the chair.”

Most late-night desks are straight or perhaps L-shaped. Colbert, Fenhagen says, wanted a variation of the C-shaped desk he had on the Report. Colbert rarely did Report interviews at the desk, but for Late Show, “he wanted to be able to turn in different directions and put his elbows on the desk, and the guest could also put their elbows on the desk.

“A lot of Hollywood guests want to turn and look at the audience. He wanted more of a conversation. His feeling was ‘Let’s lean into each other.’ The desk shape allows that to happen.”

Fenhagen showed the host a number of styles.


“I was inspired by the shape of New York buildings,” he says, “but we decided that was too busy. We tested a range of wood colors. He wanted the wood to be warm and a little classy-looking, and we kind of settled on this reddish color. The red has a lot of energy. It’s not a color used very much in late-night, so I liked it for that reason, too. I’m not really sure why it isn’t used much. It tends to be more associated with news and politics, maybe. He’s comfortable with that. He is a little bit more political, and he comes from comedy news, so it made sense for him.

“And it was a little bit of a nod to the old set. He had this red, white and blue going on. We have a little bit of that in the Late Show set as well. He’s patriotic. He really is, as a person. It’s not just the character.”


The desk needed to have shelves underneath from which Colbert could pull props. It has a monitor embedded in the desk top.

“Stephen was very, very involved with every aspect of the desk, because that’s his home,” Fenhagen says. “We’re talking an inch more here, two inches off there. Very careful about the amount of overhang and the amount of room underneath.”

The position of the desk was important.

“After the Letterman set was taken out,” Fenhagen says, “we made a mock-up of the desk and put it where it was going to be so he could see how it would feel in the theater. He changed the angle slightly to point toward the stage a little more.”

Then came the chairs.

“He wanted a new chair. We brought him three different ones. The first one the arms weren’t adjustable. He wanted adjustable arms so he could slide under the desk. He tried one with a mesh back, but he didn’t like the mesh, so we got him a solid back.”

The final hurdle was the guest chairs.

“He never had a guest chair before,” Fenhagen says. “Did he want a couch? He didn’t. I drew several different kinds of chairs, and from those he narrowed it down, and we made a mock-up of one. He sat in it, thought it was a little uncomfortable in back, so we adjusted the back. He was also afraid that for bigger people it might be too tight, so we ended up making two sizes.

“We made a total of six chairs. He feels like he never wants more than two people at a time, but we prepare for three. So there are two standard-size chairs next to his desk all the time. A third can be added. Then there are three larger-size chairs we can sub in if needed.”